Skip to content
Whether we call what BCS does IT, ICT, IS, CS or another set of letters, we are here to make it good for society. In May 2016 David Evans, BCS Policy and Community Director introduced an event showing BCS’s aim of getting views from all corners on ensuring that IT contributes to the social good - specifically in the area of capability in the workforce and its associated issues. Brian Runciman MBCS reports on the BCS Capability workshop, 16 May 2016.

As David Evans said in his introduction, capability is viewed as a dry and abstract subject, we need to raise the interest in this, and reconnect its importance.

The participants constituted a selection of experts, coming from a number of different perspectives and not all conversant with BCS. Their task? Breaking down a basic model for making capability work: 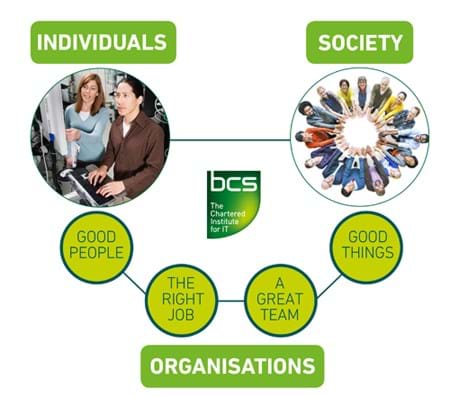 The systemic approach to the challenge

Some felt that this diagram needed ‘change’ at its centre, surrounded by the four elements of a good team, so that change can be driven by any part and is dynamic.

A more fundamental point raised about capability was that we ought to be finding out what the issues are before we try to address them. We need to ask questions: What are the ‘good things’ we want to deliver? To deliver 'good things' shouldn’t they be practical services rather than merely lofty ambitions? Where is the practical element? It was commented that capability in general is not valuable unless it is directed toward practical aims. i.e. We may be able to go to Mars, but do we need to?

Other questions raised showed the need for more data to underpin this diagram: What is missing? Are all types of organisations covered? Does ‘good’ mean the same to all organisations? What does 'good' mean for individuals? How do we measure people doing good things in good organisations? How can we decide an area that would have biggest positive impact to test these ideas?

Moving from concept to action is difficult, but BCS wants to inspire people to work at both of those levels.

Another view put forward is that the model is answering a question that is on the right track, but not fully rounded. We need to ask what the imperative is. Do we want the UK to be a world leader to give everyone the capability to achieve in it? What is the context? What are the current pain points and future potential pain points? How does the long tail - legacy - fit into this?

Part of the context is how people view technology. The public don't see the benefits of IT described as often as they see scare stories. We need a compelling narrative on capability.

One participant used a specific example of systems in some prisons that monitor and can alert the authorities to suicidal behaviour. As he said: ‘This is good stuff, unheard.'

Breaking down the system

The discussion moved onto to being one about ‘fit’: the right person in the right job with the right motivation.

Developing the right people requires repurposing them over time and keeping them abreast of societal and IT issues.

Individuals need to be empowered to refuse to undertake 'improper' work - whether ‘improper’ is defined either ethically or quality-wise. In short, this is IT professionalism.

A twenty-first century chief digital officer needs to know a lot of different things - psychology, analytics, business acumen and the like. What in the past was called a hybrid manager.

Whilst skills are important, so is the wider behaviour of individuals in the workforce. Where were such people when VW was fudging its testing regime? Who spoke up?

The key concepts here were summed up as:

The final point made here was on the personal qualities of those employed: that they need to be appropriately qualified, have an agile approach, be able to learn and adapt on the job. And these things require measuring.

How do you define the right job? Employers increasingly have to be willing to take a candidate that initially seem short of requirements but be willing to upskill them. Transferable skills and personality come into that equation. Organisations need to be more realistic about what they expect from the marketplace - a comment was made that some job descriptions are so large that they could almost be four different jobs.

There also seem to be unfillable roles, necessarily filled by contractors with all the attendant drawbacks of that approach: expense, churn and so on.

Some felt that the issue is not an individual job, but the whole career of the person, contextualised in their profession.

What happens to people when the working environment moves on from large organisations and heavy government departments to leaner, smaller enterprises - as is happening? Some jobs require attendance at a certain location, but other people are attracted by other factors, also complicating the team working role.

The increasing tendency to peripatetic and transient workforces was illustrated by one commenter with the situation in the US with radiologists where 60 per cent of the permanent workforce are undercut by outsourced workforce.

We also need to consider the right roles for the near future. And do people take enough responsibility for developing themselves? The SFIA framework was mentioned as a useful tool in this context.

For organisations, matching people to roles, or training people to help them fit a role, is vital and that includes good job descriptions and assessing core competencies.

How do you ensure you have the right people to bring an effective team together? The importance of a team leader who knows the personalities of his team, alongside the specialism they bring, was discussed. Are personality dynamics more of an indicator of the potential of a team than the sum of individual capabilities? How do you assess that impact on project and programme success or failure?

One participant brought up the lessons to be learnt from failed start-ups, where people with a good idea often start by employing friends, but as they grow need to move to a more professional approach.

An interesting example mentioned was the way some police forces conduct enquiries. They bring people from all over the force, selected not only by specialist skills but by skills such as team leadership.

When weighing the team’s assets we think about behavioural considerations, what may constitute the best productivity from each person in a team - by role or behaviour - but we don't really know how to calculate putting together high performance teams.

And what about teams in smaller organisations that don't have the luxury of choice? They also need to develop the culture to make good teams.

Is a good team only about productivity? Does it include measures around sharing and empowerment?

A great diverse team needs the capability amongst the good people to achieve the good things.

Are we clear about why we are doing things? The 'if we don't deliver we are a failure', attitude leads to do some things being done that really aren't worth doing. What is the point of being on time and on budget if outcome isn't worth it?

In short, what is the outcome? It should not always be defined as ‘bang for buck’. The comment was made that policy shouldn't be influenced by the dollar - that’s a strategy conversation.

Measures of success would also need to include social responsibility. Personal and professional ethics go beyond simply being law-abiding, especially at an organisation like BCS with its additional layer of its code of conduct.

Sustainability also needs to be part of the consideration. For example, software, perhaps embedded in cars, may become safety-critical, even if it isn't now. ‘Good things’ have a time frame and a context. It was mentioned here that one problem is companies going out of business who may be involved in safety- or mission-critical systems. Should we have in place a formalised code escrow approach? What happens when a product gets to its end of life; what happens when an IoT device loses support, and so on?

BCS role in helping make a difference in this issue

The group spent some time discussing what could usefully be prioritised from this event, and came up with this list:

More information on the BCS challenges are at www.bcs.org/goodforsociety