Skip to content
What should CEOs know from their CIOs? Brian Runciman MBCS analyses a new BCS survey that explores what CIOs are being asked to do by their CEOs compared with what CIOs think they should be doing.

In years gone by many questioned whether IT and the business were meaningfully connected. Now, not only are the links much clearer but the IT department often has the brief of doing more with less, doing it better and transforming business processes - a step forward that is reflected in this BCS survey.

The survey shows a commendable unity of thought between CIO and CEO on business transformation and organisational change. There is also a good showing for areas that affect IT professionalism, which is excellent news for us here at the Institute.

However, there is a strange lack of green issues mentioned - are businesses recognising the pointlessness of greenwash, viewing green issues as a business problem rather than an IT one or, more disturbingly, taking their eyes off the green ball?

Thirty two per cent of respondents said that their CEO or senior management team have made business transformation and organisational change the highest priority for their IT team this year. This was the top answer and was followed by operational efficiencies (27 per cent) and strategy and planning (13 per cent).

When CIOs were asked what they think should be the highest priority this year, business transformation and organisational change was again the top answer with 36 per cent. There was a reversal of the second and third answers with strategy and planning coming next on 19 per cent followed by operational efficiencies on 12 per cent.

As one participant commented: ‘The balance between driving transformation and making efficiencies is [a] fine one in terms [of] priorities.’ 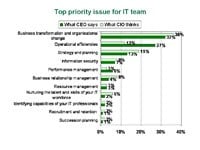 But this joined-up thinking is not universal. One CIO commented: ‘I am finding it very difficult to convince directors that investing in technology can make efficiency savings elsewhere in the organisation.

Although I have provided business cases and cost benefit analyses, our finance director is only interested in cutting the IT budget and will not invest.’

The biggest disagreement appears to be over operational efficiencies. Whereas 27 per cent of CIOs have been set this as the top priority by their CEOs, only 12 per cent of CIOs think it should be in pole position.

A greater number of respondents think that the following should be top priorities than the numbers of CEOs that have set these as highest priority:

Hopefully, the way forward is covered by this respondent: ‘I am fully aligned with both the board and the CEO. I get the support to do my role but not necessarily all the resources to do it in the timescales that the business would like to do things; it’s a balance between cost and value returned.’

Only 29 per cent of respondents felt they had enough resources to achieve what their CEO or senior management team had asked their team to do.

This was highlighted by this CIO’s comment: ‘Whilst operational savings could be made, it is impossible to find the time to allocate to this due to resource limitations. In addition the CIO function is built into my role without the title. Effectively the organisation has over-optimistic delivery expectations given the available resource.’

On the skills side one CIO commented: ‘The power to change comes from the resource I have; regardless of priority, achievement depends on the quality of the prime resource - the staff.’ 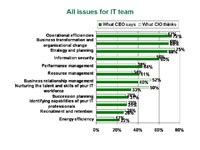 When we asked about all issues being worked on (rather than just the top priority), the two issues with the largest discrepancy in terms of the CEO and CIO view are ‘nurturing the talent and skills of your IT workforce’ and ‘business relationship management’.

In both cases more CIOs think they should be working on these than do CEOs, 50 per cent against 33 per cent and 52 per cent against 40 per cent respectively. Interestingly there was agreement on the issue of identifying the capabilities of IT professionals, with 29 per cent of each viewing this as an issue to work on.

From the perspective of the Institute it is encouraging to see that some organisations’ CIOs are viewing the nurturing of their teams’ careers and softer skills as very high priority. In the ‘highest priority’ question a total of 18 per cent of the respondents identified with these areas, broken down as follows:

One CIO drew attention to the difficult area of business analysis: ‘The hardest skill for me to find is business analysis. If you are concerned about the training needed for IT professionals this is key.

Poor business analysis is the essence of most project issues I see. (I include BPR and change management and business relationship management as part of the skills of a BA).

I have discussed this many times with other board level people and our overall feeling is the only predictors for a good BA are intelligence and the ability to talk to people effectively. I wish the UK were training people in this skill.’

Of those who felt they needed more resources to perform their tasks, 75 per cent wanted ‘additional IT staff that are suitably qualified’, with 43 per cent also mentioning ‘enhanced IT skills among the existing workforce.’

Perception of the IT function and CIOs

Let’s cover this with some CIO comments from the survey:

‘Even since I got an MBA, my CEO more and more perceives me like the other C-Level executives and has engaged me more in non-typical committees of the bank.’

‘My organisation have IT reporting into a lower than CEO level, which reflects the importance they place on IT. It is not seen as core business, or a core business enabler.’

For the IT team IS was surprisingly low in the priorities, with 8 per cent of CIOs thinking it the top issue, compared to 7 per cent of CEOs.

Interestingly, in terms of the general issues the IT team have been asked to address, 60 per cent of CEOs and senior management viewed security as important, but only 56 per cent of CIOs. This could reflect CIOs confidence in the security they have in place, but it does show that security issues in general are being recognised at board level, surely a good trend.

One CIO commented on the business impact of getting security approaches wrong: ‘Failure to encompass this through correct service management and security procedures will lead to continual fire fighting by the IT practitioners, which removes them from their normal employment.’

Green issues are low down the list of priorities and barely register in other areas. This could be because these things are, quite rightly, seen as a business issue rather than an IT one, although, as IT is such a contributor to, for example, carbon emissions, it is surprising this issue didn’t have more of a profile.

In terms of ‘top priority’ for the IT team, green issues didn’t register at all, although ‘energy efficiency’ appeared at no. 12 on the general issues sections (22 per cent of CEOs have asked their IT team to look at this, whereas 17 per cent of CIOs thought they should).

One CIO commented: ‘The focus is entirely on short-term cuts (within two years) to meet the needs to the government's comprehensive spending review when it should be on transformation of services to deliver longer-term cashable benefits. But that needs staff for the next three to four years and the organisation isn't prepared to wait.’

What about your organisation? Two CIOs speak

The negative view: ‘Our head of IT's definition of strategic is “next week”. Lamentable leadership, direction. It's all transactional with no focus on enabling the people.’

The balanced view: ‘Much of the current focus is on using IT to drive operational efficiencies to improve and maximise competitive advantage in the marketplace. This is being undertaken in conjunction with a strategic business review whilst embedding streamlined processes within the organisation.

Careful handling of the organisational change is required to engage and retain key stakeholders to facilitate delivery of the required solution on the ground. It is a challenging juggling act to "do more with less" and prevent negative business reaction to "process improvement" driven staff reduction.’

Notes
The survey was conducted online from 6 October to 2 November 2011 with 252 responses from the BCS ELITE group and corporate clients, non-members of BCS and the La Fosse Associates LinkedIn group.

2021 will be a particularly challenging year for data, because of Schrems II, Brexit and regulators (probably) flexing their muscles a bit more than 2020. Writes Vanessa Barnett, technology and data partner, Keystone Law.

Why is governance so important to running and supporting technology?