The BCSWomen Lovelace Colloquium 2018 is a free, one day conference for women undergraduates and taught masters students.

The eSkills Malta Foundation, in collaboration with the BCS Malta Section and the BCSWomen, would like to invite anyone interested in diversifying across skills and industries, from computer science and interactive media to music and digital arts, to hear a talk by the award-winning technologist, musician, researcher and lecturer, Nela Brown. Nela will present two projects she has been involved with recently, Female Laptop Orchestra and G.Hack, as well as talk about her multidisciplinary career path. There will also be plenty of time to ask questions.

Nela Brown started her musical journey studying piano and saxophone in Croatia, before picking up a bass guitar and joining an all-female rock band. She followed this up by studying jazz and Sonic Arts in London, designing sound for award-winning theatre, film and mobile projects and doing a PhD in human-computer interaction. In 2011 she started a G.Hack, an art & technology lab for female researchers at the School of Electronic Engineering and Computer Science at Queen Mary University of London. In 2013 she won a Highly Commended WISE Leader Award and in 2014, she started Female Laptop Orchestra project connecting scientists, artist, and musicians through global telematic performances. Last year, she was featured as an ‘on-screen expert’ scientist on the ‘Cloud Challenge’ TV programme produced by CNBC.

Next year, she will be developing new audio work based on the song and dance of Boon Wurrung and Woi Wurrung people as part of her Macgeorge Fellowship at the University of Melbourne, Australia. Currently, she is working on her PhD in human-computer interaction and lecturing on a variety of topics from creative coding to transmedia storytelling and digital media campaigns at the University of Greenwich in London. When not immersed in research and teaching, she can be found hacking into biosignals and bananas at music tech festivals, doing telematic performances with her laptop orchestra or recording environmental sounds in 3D!

This event is brought to you by: The eSkills Malta Foundation in collaboration with the BCS Malta Section and BCSWomen 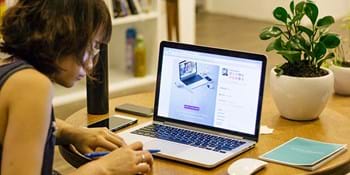