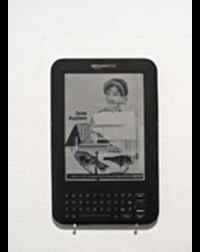 Definition of a glitch: A short-lived fault or malfunction in a system, a sudden disruption to the normal running of a network; the frustrating by-product of technology gone awry.

The term glitch itself is said to date from the early 1960s, used as part of the American space programme to indicate ‘a spike or change in voltage in an electrical current.’ Can a glitch ever be art?

Isolated examples of art which make use of glitches have probably been around for 30 years; it is well-known the role that accident and chance can play in art (e.g., Surrealism), but so-called Glitch Art, at less than ten years old, is gaining in prominence.

A whole category devoted to Glitch art on Flickr dates from 2004 and was set up by LiminialMike who writes, ‘Whenever camera lenses erroneously save the data of what they see to its recording device or whenever the binary code of an image file gets corrupted (intentionally or accidentally) the final result is a faulty image, which we call Glitch.’

The Flickr pool definition includes images which have not been manipulated in editing software (unless it’s the software itself that has failed and glitched the data). It now has over 5,000 members all interested in data-bending. The book Glitch: Designing Imperfection, has 900 contributors.

Now there is a show - Glitch Moment/ums, at Furtherfield Gallery in London (until 28 July 2013), which exhibits some of this fascinating and varied aesthetic and introduces us to artists working in a variety of forms including video, music and even found objects, as with our artist this month - Benjamin Gaulon who has a unique way of considering current technology and teasing art from it.

Benjamin’s work explores the limits and failures of ICT, from software (data-bending) to hardware (circuit-bending) and addresses issues such as planned obsolescence, consumerism and the disposable society, ownership and privacy, through the exploration of détournement, hacking and recycling.

The concept of détournement, which has been defined as ‘turning expressions of the capitalist system and its media culture against itself’ (Douglas B. Holt), is seen to great effect in KindleGlitched.

KindleGlitched is a series of glitched Kindles donated, found or bought on eBay and signed by the artist. The generated visuals are unique and permanent.

The initial idea came about serendipitously when, as Benjamin tells me, ‘one day, I found a broken Kindle at a friend’s house (sitting under their coffee table for months waiting for the landfill), I was fascinated by the aesthetical quality of the glitched image imprinted and by the fact that image was printed permanently (as for a print or etching) and no battery would ever be required.’

Historically it is Marcel Duchamp who is credited as one of the first to make art with found objects. In 1917 he famously and provocatively selected a urinal, signed it and exhibited it in New York, under the title Fountain. He called such artworks ‘ready-mades’. KindleGlitched is an enigmatic object at once familiar, even mundane, imbued with a host of (perhaps ultimately unanswerable) questions.

Benjamin’s re-appropriation of a Kindle into an art object refers to the ubiquitous, increasingly inexpensive technological gadgets that surround our daily life and reminds us to ask what happens when they break down, become redundant or we tire of them?

As the artist explains, ‘The Kindles are mass produced, cheap hardware and by consequence very prompt to malfunction and unfixable (like most devices today they are not built to be fixable but rather to be disposed of). So I also call this piece, The Aesthetics of Planned Obsolescence.’

New media technologist Filip Visnjic, has pointed out that affordable hardware has its benefits and problems. ‘As cheap electronics become widespread and more available, we become less protective of them. No longer do we purchase cases or try to protect them. Kindle, costing a mere $70, is one of those devices; your library is in the cloud, if it’s lost or broken it is easily replaced.’

They originally came from Amazon and now they are back on Amazon - because the artist sells his KindleGlitched artworks here, saying, ‘I liked the idea of putting them back on the market as e-waste, but changing their perceived value by signing them as an art piece.

Having them for sale on Amazon seemed obvious, the best way, in my opinion to highlight their fragility, while showing the cynicism of capitalism that would transform anything to merchandise.’

But why make what some might call a mistake or malfunction into art? Some artists are drawn to the aesthetics of degradation and decay and hold a fascination with obsolete media. Furtherfield says, ‘Glitch art subverts the way in which we are supposed to relate to technology, causing playful, imaginative disruptions.’ It often has a low-tech approach and a punk attitude.

As a recent (highly recommended) PBS documentary claimed, ‘It’s about getting beyond the notion that these faults are actually faults.’ Furthermore, ‘enjoying the aesthetics of technological mistakes defies the notion that technology and entertainment has to be seamless.’

Looking at Glitch art can even be a gateway into understanding our cultural values in this technological age: ‘New technological tools are filled by the manufacturer with the promise of seamless perfection, until that is, they exhibit unwanted behaviour.

Such artists show us an alternative version of our technologically-driven age. Some glitch artists see their work as empowering - helping people to see what goes on inside a computer and providing material for people to create their own voice…we don’t have to accept what has been handed to us.’

For several years Benjamin has been leading workshops enabling participants to explore the potential of obsolete technologies in a creative way and find new strategies for e-waste and recycling.

His Recyclism Hacklab is a collaborative workspace focused on contemporary DIY and hacking practices.

He also runs YouGlitch, a website where corrupted GIFs created with corrupt video software are displayed. Corrupt video allows its users to glitch videos in real-time and automatically uploads them.

Until the end of the exhibition you can also upload your own work of Glitch Art at the Furtherfield portal.

Rashik sits down with our President, Mayank Prakash and Director of Education, Julia Adamson to talk about his new role and his ambitions for BCS. Rashik discusses the importance of technology in society, what members can expect from him as CEO and how he plans to further our organisational purpose of making IT good for society.

We are deeply saddened by the death of Her Majesty the Queen. Our thoughts are with the royal family, including our patron, HRH the Duke of Kent.

On results day, the professional body for information technology, BCS, The Chartered Institute for IT, congratulates the 80,000 people awarded a GCSE in computing.

How to survive a cyber attack