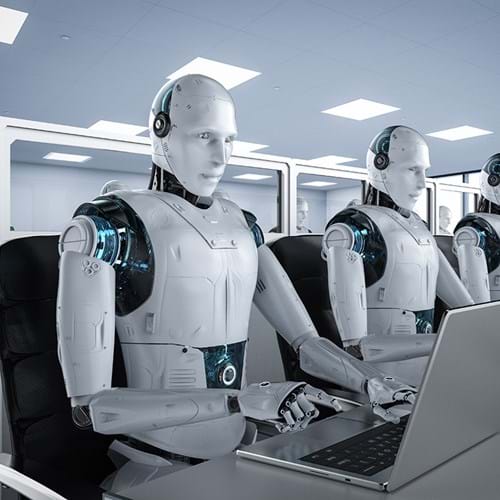 Analysts were predicting that an army of software robots would displace large swathes of white collar workers as far back as 2010. Now, automation technology has come of age and offers enterprise-grade scalability and security.

There is no denying that the adoption of both AI and automation is already happening - but it’s the speed of that change that has caused consternation. Large scale service sectors have largely relied on human workers - but the COVID crisis has highlighted that over reliance on people incurs a high risk to business resilience, should they become unavailable.

People-focused delivery models inhibit scalability and constrain enterprises from pivoting quickly to major social and economic events. For that reason, enterprises are struggling to keep pace. As technology marches forward, business models must change or they will fall behind. The economic union and the movement of workers across borders supported growth during the old system - but as we move forward into post-Brexit, post-COVID, the business model will need to change.

The (robot) cavalry is here

The last couple of decades have seen the UK send work abroad to take advantage of developing countries with advanced talent pools, who are comparatively low cost when compared to their British counterparts. As the range and scale of work changes, the future looks to the widespread ‘bot-shoring’ of roles to automation, i.e. An industrial scale automation that will systematically replace back office workers with software bots.

Industry analysts and platform vendors have been predicting for some time that 30%-50% of the existing process landscape will be automated. While analysts can’t agree on the timeframe, the consensus seems to suggest 30% by 2030. Early adopter enterprises have seen attractive proof points now coupled with real world successes.

During the early stages of the pandemic in 2019, Amazon was able to hire 100,000 employees in four weeks using automation. Automated business process discovery tools are making it easier than ever before to find automation targets and reduce build effort by up to 50% for vendors with full lifecycle automation capabilities.

Will a robot make me redundant?

When science fiction presents a future where the robot army takes over every aspect of work (and eventually society itself) one thing is overlooked - it is not feasible to automate 100% of a process.

Processes with low variance and therefore low complexity can be automated easily. However, where there are complex decisions that require higher degrees of judgement, these processes are more challenging to automate and often require a 'human in the loop' to make an adjudication decision.

Enterprises must plan on retaining sufficiently skilled workers to handle process exceptions or make decisions on circa 20% to 40% of cases. Therefore, 20%-40% of an automated process will still require exception handling.

The new reality of hybrid working is less about wfh vs office and more about a future hybrid working model, where physical workers work alongside their virtual worker colleagues. Tedious, repetitive work that people are shunning in the great resignation will be replaced by robotic assistants who will work quickly, at scale, without bias and give the human back the time they need to make decisions and enjoy a better work balance.

One example Cameron gives is a simple fuel expenses report: ‘in the same way you use a macro to record a process and automate, I can show a virtual worker how to do my mileage and expenses claim. It might need a bit of configuration, but then in the future, the digital assistant will do it for me. And you may wonder, why bother when you only save yourself 15 minutes a week? But if you do that with four or five other tasks, you’re saving an hour. Then, if you roll that our across your workforce - suddenly, thousands of hours are being saved.’

One of the barriers to adoption - fear of losing jobs - can prevent some people from accepting automation enabled change. However, when they’ve experienced what a robotic worker can do for them, many workers are eager to not only embrace hybrid working, but seek out more opportunities to automate.

‘When people start to see the benefits - how they could, say, clear a backlog of six weeks in just a few hours - then they start to be engaged and motivated to seek out more changes.’

Did a robot just promote me?

Robots are not going to make the workforce redundant. In the main, virtual workers will not result in large swathes of the workforce being made obsolete. Enterprises are rejecting the same mess for less in favour of automated enabled growth models that shift people from transactional work to growth and transformation activities.

‘One of the major issues that we run into with customers, is that they need to transform, but just don’t have the capacity or the bandwidth to do it - running flat out to stand still. So, one of the key changes we suggest to companies is to introduce automation to create the horsepower in your organisation to enable change and transformation. That frees up space to go for cx or goals of larger scale growth, transformation and better support for your customers.’

Automation gives enterprises the room they need to grow, but also opportunities for employees to step up into new roles.

A robot promoted the bookkeepers!

Cameron quotes a BBC article about VisiCalc, the grandfather of Excel. ‘the first Excel spreadsheet was created in 1979. From then until now, there are 400,000 fewer bookkeeping/accountancy clerks but there are now actually 600,000 more accountants.

'Why? Well, it made the bookkeeping part of it so much easier and cheaper, so the weighting shifted from quite transactional work to value add work. So, in real terms there's been a 200,000 increase in jobs in the sector - but the job weighting of those jobs has increased significantly. There’s a massive fear that automation is going to completely annihilate the workforce, but in truth, we are moving much more towards a hybrid workforce.’

In their book, the second machine age, Erik Brynjolfsson and Andrew McAfee cite the example of a 2005 chess tournament where the hydra chess supercomputer was beaten by two amateur chess players and three basic laptops.

The conclusion drawn by Brynjolfsson and McAfee was that, far from human relevance being automated out of existence, hybrid working models, where the power of automation is directed by human insight and strategic guidance, is significantly more powerful.

While Bill Gates was ridiculed for promising a PC on every desk in every home in 1979, moving forward into the 21st century, it seems ever more likely that the widespread adoption of automation with ‘a robot for very person’ is looking increasingly feasible.

Far from being feared, the adoption of virtual workers supporting a hybrid workforce will become a driver for growth through automation enabled transformation.

David Cameron is a seasoned chief automation officer with over 28 years’ relevant experience in designing, building and deploying digital operating models that deliver value. Having held senior roles as Head of hyperautomation for Fujitsu in Europe and Director for Digital Strategy and Growth for Scotland while at HP.

Cameron engages with the c-suite to define the target ROI and business case of enterprise-wide automation programmes and then go on to mobilise and deliver against those programmes. Cameron specialises in client business engagement to drive hyperautomation, lead transformation and provides Camtec with thought leadership and strategic direction on all aspects of automation and digital transformation.

What is the future of gaming?