Are Central Bank Digital Currencies the future of cash? 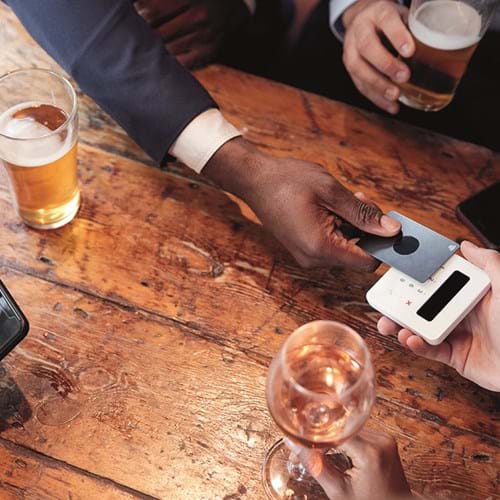 William Lovell, Head of Future Technologies at the Bank of England, explores how CBDCs might change money, the problems of a cashless society and how he’s keeping bar staff guessing.

There is a bar behind the main Bank of England building in the City of London where many of us like to go for an after-work drink. Sometimes to catch up, sometimes to unwind, sometimes to continue an interesting (and non-confidential!) conversation in a less formal setting.

Late in 2017, some colleagues and I had finished an afternoon around a whiteboard trying to map how the UK & Global payment systems might develop in the coming years. We had decided to continue the discussion over a drink before heading home. Having ordered the drinks, I stood at the bar waiting to pay. The bartender studied my face for a moment and then reached for the contactless card payment machine. I offered him a 20 pound note.

He reacted as if his team had just missed an easy goal. I asked what was up? He explained that the bar staff reckoned they could tell who would pay by cash or contactless by looking at them. I thought this was funny and we both laughed. I didn't dare tell him how I had spent the earlier part of the day. At least I looked like a technology guy, even if I wasn't quite acting the part. What neither of us knew was that we had just acted out a tipping point in UK payments.

So, what’s the problem with going 100% digital?

Digital technology superseding physical and analogue technologies is hardly new. From photography to music and beyond, the last two decades have seen many industries turned on their heads. Digital technology has also been present in payments for a long time; from the first ATM in the late 1960s, through to contactless, PayPal and the rest. The difference is that so far, digital payment technology has automated paper processes. The paper cheques and slips may have gone, but the underlying processes remain the same.

Ask yourself the question; if you were starting now, would you invent a process like the one we have presently? Not sure? Then ask yourself again the next time you’re typing the numbers from a debit card into a web browser. Collectively, a remarkable job has been done to re-engineer payment processes to work with online business but, fundamentally, we are working with something not designed for the virtual world.

The evolution of online business and the decline of cash are taking us to a place where we need to think differently about money. Currently, the Bank of England (BoE) is actively exploring the case for a possible central bank digital currency (CBDC) – a digital version of the pound issued by the central bank (think of it like a digital banknote). I should point out, though, that no decision has been made at this time.

As well as looking at the changes that might lead us to introduce such a CBDC, I want to look at what might influence its technical design and the demands that would place on the technology itself.

So, what would a digital version of cash look like?

First of all, it needs to be accessible and easy to use. One of the great incidental features of bank notes is their ease of use. You don't need a bank account, phone or an internet connection. The colour, size and braille markings on UK banknotes make them useable by the widest range of people.

There are many people who withdraw a fixed amount of money each week to manage their budget. If the number of shops and outlets that accept physical cash declines beyond a certain point, then the digital replacement will need to consider all of these use cases and personas. One way to tackle this may be through an app ecosystem that allows innovation and the development and integration of different solutions for different groups of users.

Beyond the user experience, we also need to consider the scale and performance that might be needed. To understand this, we need to think about how and where digital cash might be used. If demand is primarily from online and retail purchases, then the patterns of use will follow retail patterns, with busy shopping days and online peaks and troughs. However, if it becomes an attractive way for companies to make payroll, then we could see very different patterns of demand. A system that slows to a crawl on the last day of the month as the majority of companies pay their employees would not be a step forward.

There are then potential new categories of demand that we have only just begun to see. Many of these revolve around the internet of things. Devices that can make their own payments, such as vehicles that pay their own tolls, or smart homes that sell excess electricity from their solar panels to neighbouring homes. In the same way that existing electronic payments have evolved uses that no one envisaged, digital money will need to evolve to meet demands and business models that have not yet been thought of.

A successful digital currency will also generate a huge amount of data. This data will create a large amount of value itself, but it comes with challenges around privacy that will need to be balanced carefully.

Another incidental feature of physical bank notes is the anonymity with which they can be used. This comes with the other accidental feature; when notes are offered in large quantity e.g., in a suitcase, we instinctively know that business is not necessarily above-board. Digital currencies will need to find a different solution to this problem.

While it is possible to create an anonymous digital currency, the need to combat financial crime means that some amount of information about who is paying, and who is being paid is going to be required. The key challenge, then, is to protect this information from those who do not need to see it. The security scheme needs to be not only robust, but something that ordinary users can trust.

Why not just use cryptocurrencies?

Many of the features we might hope to see are already present. It’s certainly true that the increased interest in cryptocurrencies in the past five years has caused many in the central banking and finance communities to sit up and take notice. In practice, however, even the most popular cryptocurrencies perform poorly as a substitute for everyday money.

The algorithmic control of Bitcoin makes it attractive to investors who can stomach the risk, but makes it impractical as a platform for everyday purchases or making payroll. Imagine a supermarket where all the items were priced in Bitcoin and you used Bitcoin at the till: the swings in value would make the weekly shop a high-risk financial venture in an unregulated market.

Similarly, the smart contract features of Ethereum are creating a platform for some truly innovative products, such as Flash loans and liquidity pools, but whilst these products create an interesting challenge to conventional financial market products, they are complex, largely unregulated and not intended for day-to-day financial activity.

How do we respond to a challenge as big as this?

If I had to answer in a single word, it would be ‘collaboratively’. The Bank of England and HM Treasury announced a joint task force in April 2021 to ensure a strategic approach between the UK authorities as they explore CBDC and to promote close coordination between them. This is being backed up by a CBDC Engagement Forum to gather strategic input on all non-technology aspects and a CBDC Technology Forum, with members drawn from financial institutions, academia, fintech, infrastructure providers and technology firms - to gather input on all technology aspects of CBDC.

In conclusion, there are a great many problems to solve and aspects to consider that take us far beyond picking one technology over another. But this is what makes it the most exciting time to be working in central bank technology. With pandemic restrictions lifting, I am hoping to be able to work some of these out over a drink in my favourite bar. I'll be using contactless for the time being - but in the future, it’s possible that bar staff will have a new guessing game to play.