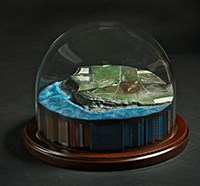 Jeremy Gardiner, our artist this month, has spent decades exploring the ancient history of the Jurassic coastline through his practice which employs a hybrid technique combining painting, drawing, printmaking and use of digital technologies to which we can now add 3D printing.

Erosion by sea, weather and human activity has resulted in a huge variety of different landforms including cliffs, beaches, landslides, arches and caves. This landscape has very particular resonances for the artist as it is where he grew up and he wishes to engage audiences to experience the changing face of the earth.

Jeremy explains, ‘By creating distinct layers of color, my working method involves scouring, building accretions of paint, collaging and sanding down, in an attempt to emulate on the surface of my paintings the effects of geological time on the landscape.’

Additionally he sometimes combines different features from different locations along the coast in the same work, achieving images that take the viewer on a new exploration of familiar territory, from multiple perspectives.

This practice is put to use too in his digital work, which can be seen as a natural extension of his interest in the incredibly rich visual and scientific resource that is this landscape. St Aldhelm's Head, this month’s image, is a hybrid work incorporating print, painting and sculpture.

A relief model was made using solid freeform fabrication techniques or 3D printing, from a series of cross sections of the landscape. Hand-painted by a model maker, around the mahogany base can be seen a colour coded spectrum, every time a new colour was mixed, a panel was painted to record the fact.

The fact that it is displayed under a glass dome gives the work a slightly surreal quality but most importantly it alerts us to something that is precious and fragile underneath, perhaps a metaphor for Britain’s natural environments which are under constant threat. In this artist’s hands both the heritage coastline and the piece of art become a prized object of great desire, worth keeping and showing off.

3D printing, the notion of a ‘factory on the desktop’ has very great potential to offer artists. Jeremy produces work that uses both subtractive and additive technologies. Subtractive fabrication removes or reduces material from a solid using any combination of tooling techniques such as drills, lathes, grinders and lasers in order to reveal a new shape.

Jeremy has employed lasers to cut the component parts of his work using paper, wood and plastics. Additive fabrication is the creation of a new form through an accumulation of layers with liquid and powders, such as the work featured here, made with a Z Corp printer. Such printers work by ‘printing’ successive layers to build-up a sculptural object at a rate of approximately one vertical inch per hour.

Information for the landscape comes from LiDAR data (Light Detection And Ranging, also LADAR), recorded with optical remote sensing technology that can measure the distance to a set point using laser beams.

He describes it as an evocation of a trip through time and space of this heritage coastline. A live feed of weather data affects the virtual reality environment and recorded sounds create a multisensory experience for the viewer that never repeats itself.

Currently Jeremy is developing his ideas in collaboration with Dr Gary Priestnall, a specialist in landscape visualisation in the School of Geography at Nottingham University. They are working on PARMs (projection augmented relief models, a term coined by Dr Priestnall) - physical 3D models, onto which a computer image is projected to create a realistic looking object.

Instead of fixed surface features rendered with hand painting, the unique combination of physical object and computer-generated information that is a PARM would allow Jeremy to create real time changes and incorporate some of the elements seen in Light Years. It even has the potential for interactivity.

Since his days at the Royal College of Art in the early 1980s, Jeremy has been interested in using computers as image makers and generating working systems. He believes that computers in art ‘supplied the tools and helped achieve results not otherwise possible.’

He identifies two main types of computer art aesthetic: what we might term an algorithmic aesthetic, artists who utilise computers to develop an aesthetic of complex visual forms such as randomly-generated geometrics. And a heuristic approach (in which he counts himself), artists who develop their own personal pictorial language and embrace computers to accomplish a specific task.

Jeremy further explains, ‘working with a computer is about having a strategy or point of view as you work. Where the computer is a studio in which to work and learn from your mistakes. This is my approach, the aesthetic of the artist pursuing his vision.’

These two approaches are not mutually exclusive and do have areas of similarity and points of crossover, nonetheless they demonstrate the change in how computer use in art is viewed from the 1980s onwards.

Birmingham based Lander Automotive Ltd has won SME Employer of the Year at the National Apprenticeship Awards 2021. The BCS, The Chartered Institute for IT and RITTech sponsored category celebrates outstanding apprenticeship schemes.

From cyberbullying to stalking and transphobia, online harms are damaging lives. A panel of BCS experts dissect the problem and explore possible solutions.

Reported intrusions are down, the amount of personal data exposed is down, so it’s all good, right? Well yes and no... Patrick O’Connor CISSP CEH MBCS explores the good and bad of events in cyber security in 2021.

How ‘lowest’ as best budgeting, opensource intelligence, a few manuals and a curious mind can turn out the lights. Chris Kubecka, Woman Hacker of The Year 2020, tells Martin Cooper MBCS some of what she knows about the art of the criminally possible.