Skip to content
This month we are considering a truly extraordinary use of the digital. Artist and creative entrepreneur Anna Hill is exploring how immersive art can communicate the human experience of space travel and, in her words, ‘bring space down to earth’. 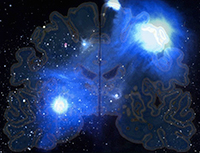 Working with a team of interdisciplinary experts, as Space Synapse Systems, she is currently engaged in a study called ‘Earth Rider’ supported by the European Space Agency. This will introduce innovative delivery tools for education, planetarium, gallery and space centres including shows and online and experiential education programs. The objective of Earth Rider is the implementation of an educational suite of services using digital audio-visual technology to convey to the viewer the total experience of being in outer space.

When realised, this will give vital boost to the STEM (science, technology, engineering and maths) agenda, a task particularly important among young people, as well as addressing current and future environmental challenges concerning us all. And it uses art to do so.

Anna’s interest developed from the psychological shifts that happen when astronauts are in space. It has been discovered that those who have been into space experience a cognitive shift and a change in their attitude toward the planet and themselves. This is documented by author and co-founder of the Overview Institute Frank White, who coined the term ‘the overview effect’ (The Overview Effect: Space Exploration and Human Evolution, 1987, 1998) to describe a transcendental, euphoric feeling of universal connection reported by some astronauts during spaceflight, often while viewing the Earth from orbit or from the lunar surface. Frank White writes ‘it is a realisation of the unity and ecological interdependence of all life on Earth, an understanding that, seen from space, there are no political boundaries on the planet.’

The Apollo astronaut Edgar Mitchell described his revelation upon seeing the Earth from space as part of the entire solar system thus: ‘I fully understood that the molecules in my body [...] had been prototyped in some ancient generation stars, it was pretty obvious that we are stardust.’ (from Overview, a film directed by Guy Reid for the Planetary Collective 2012)

However only about 500 people have been into space and, notwithstanding current commercial space travel endeavours, it seems that relatively few people will ever have the chance to do so. David Beaver, co-founder of the Overview Institute, comments that upon those who witness the Earth from space ‘the changing scenery, the interactivity of the biosphere has an incredible aesthetic impact.’ Starting with this premise Anna seeks to find a means to bring something of that sublime experience to a wider audience on Earth.

Anna writes, ‘My art practice and research is motivated by the tenet that the self and the universe are not separate entities but one functional whole composed of complex and inter-related systems. In the modern technologised world, dependency on specialists has increasingly taken creative processes and responsibilities away from the individual. This has resulted in the creation of a culture of material consumption, environmental damage, cynicism and passivity. Such loss of self-awareness and disconnect with the environment on both an individual and collective level, may also result in a “loss of a soul”.’

A graduate of the Royal College of Art, her work with the European Space Agency allowed her to access specialist expertise. Anna believes, ‘The silos and camps that people have set up between the art and science world - the emotional and the rational, aren’t so divided; they should be part of a whole.’

Of particular artistic influence was a residency with American light artist James Turrell at Roden Crater, his defunct volcanic crater in Arizona. Since 1979 Turrell has been developing a massive sky-scape, a naked-eye observatory for channelling natural light. Turrell, along with a small number of artists beginning in the 1960s (including Robert Irwin, Dan Flavin, Liliane Lijn), has addressed the phenomenological, spiritual and transient qualities of light by giving it physical form and creating an immersive experience for the viewer.

A little-known subject outside of specialist circles, Space Arts, (a loose genre of shared-interest multi-media artists) has great potential for an innovative combination of aesthetics and technology.

Whole Earth belief systems are not new, (think Buckminster Fuller’s the Earth is a Spaceship and James Lovelock’s Gaia Hypothesis) but perhaps a new approach is needed to emotionally engage media-savvy 21st-Century audiences. Edgar Mitchell believes it is imperative to ‘come up with a new way, a story, a picture to approach [environmental challenges on Earth] and to shift our behaviours in such a way that it leads to a sustainable approach to our civilisation instead of a destructive approach.’ We are not separate from Nature. How might art assist with this? Perhaps art can be a portal to somewhere else.

Using a mix of methods which could include virtual reality headsets like the Oculus Rift, Space Synapse intends to simulate the visual, auditory and psychological experiences of, for example, the exhilaration of space launch, G-force, weightlessness, the purity and peace of observing planet Earth from space.

It could be possible to have a transcendental experience or an experience that gives new insight into yourself and the nature of being human. Further it allows the capacity to share the space experience with millions of people on Earth. The aim is to explore, not judge, new ideas by taking lessons from the very best of space exploration - divergent thinking, curiosity-driven collaborations and cross-cultural teams. According to White, this provides the critical inspiration to ‘bring forth the vision that changes history’.

Also in development is an online ‘social resource management game’ - a massively multiplayer online course or community (or MMOC), for participatory engagement with space exploration. Anna explains this aims to ‘challenge redundant principles of passive consumption in education’ with a goal to ‘engage new demographics, particularly in STEM and indeed STEAM (A standing for arts) education for a post-industrial digital age.’

Anna’s work is a means of inverting military values which tend to be inherent in the field of space physics. Some astrophysics think that too much R&D emphasis is placed on surveillance communication, military applications and so on and that the research findings and outputs aren’t being utilised in the best way.

In this model human values and environmental factors are ignored, something that Anna’s work and the Space Synapse mission tries to redress. She is interested in peaceful applications and technology transfer and sustainable uses of space science and technology. Her work also allows for the rare opportunity for international astronaut and cosmonaut participation.

Anna’s work is a 21st-Century reinterpretation of the sublime in art, generally understood to refer to something breath-taking, overpowering or absolutely great. It is in the tradition of 19th-Century romantic landscape painters especially JMW Turner and Caspar David Friedrich whose allegorical land, seascapes and night skies were filled with contemplative figures silhouetted against nature and sought to convey the spiritual experiences of being human and the insignificance of the individual against the vastness of the universe. It will be fascinating to see how Anna takes this to the next level using the latest technology.