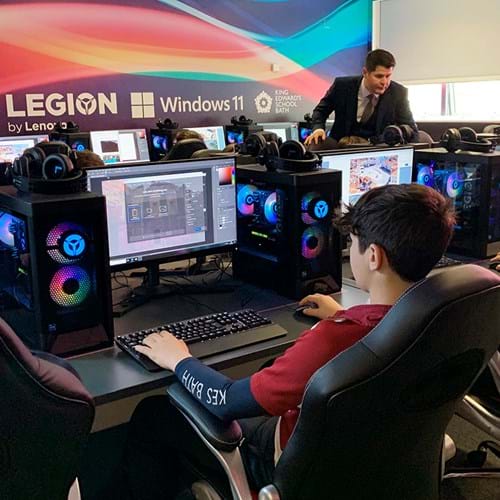 The new facility is set to enhance an exciting range of learning opportunities at KES, as well as providing pupils with some of the key technology and creative digital skills that they will need in the future. The new media suite will also be home to the school’s flourishing co-curricular esports programme, and it is further anticipated that the new facility will serve as a digital hub for wider use by young people across the local Bath community.

Commenting on the new facility, Martin Boden, Headmaster at KES, said: ‘As a school we are proud of our history of providing an engaging, enriching, and well-rounded education. This includes equipping our pupils with the skills and knowledge required for an ever-evolving technological landscape.

‘The importance of STEM subjects alongside technology and digital skills is critical to our pupils’ future educational and career success and led our decision to invest in these new facilities.

‘In partnership with Lenovo and Microsoft, we have designed a state-of-the-art Creative Media Suite. It is a modern and exciting learning space, which is set to advance our pupils’ engagement with STEM and digital activities. We are immensely grateful that Lenovo and Microsoft share our vision of unlocking potential through digital learning, which ultimately led to our collaboration on this hugely exciting project.’

David Gray, Gaming Product Manager, Lenovo said ‘Lenovo has a long history of working within education, and Lenovo Legion is one of the UK’s most popular gaming brands. Our partnership with KES is a result of bringing those two areas together.

‘Gaming is no longer a niche hobby, it is a highly viable career option with opportunities in traditional technology business roles through to branding, managing, or competing in an esports team and many more. Having the right hardware is key to enabling the students and we’re very excited see the systems used to their full potential. ‘

Commenting on the opportunities that the new Creative Media Suite provides, David Middlebrough, Deputy Head: Curriculum & Digital Strategy at King Edward’s, said: ‘The partnership with Lenovo and Microsoft allows us to fully embrace the opportunities for creative digital media work across a range of activities and subjects, without having to worry about the limitations of our hardware.

‘This new facility will be used for curriculum activities and as part of our co-curricular programme. We have seen that pupils want to bring more digital media work into their studies, and there are obvious benefits to being able to work with better quality photo and video editing facilities in subjects such as ICT, Drama, Art, and Photography. However, we have also seen that pupils want to use these skills in all subjects – whether it is filming a video for a History assignment, putting together a news report in English or creating an animation of a geographical process. This wonderful new facility will allow pupils to fully realise these creative ambitions.

‘In addition, it won’t just be King Edward’s School pupils from our Junior School up to Sixth Form who will benefit from this new facility, as we plan to offer the space as a hub for wider use by young people across the local community.’

Laura James, Head of Computing and ICT at KES, is excited about the enhanced learning facilities that the new computers provide. ‘Using these powerful computers will allow our pupils to more easily explore avenues such as video editing and games development. The latter is a hugely viable career path these days and having a classroom set of powerful computers will mean we can now give pupils a taste of the processes behind making a realistic 3D game, using an engine such as Unity.

‘With the powerful graphics cards installed, we will also be able to use software such as Blender to allow pupils to explore the possibilities of three-dimensional design and animation, as well as the Adobe Creative Suite which allows us to teach topics such as video editing, special effects and character animation.’

Laura also commented: ‘In addition, we are always looking for ways to enhance the curriculum with cutting edge topics such as cybersecurity and artificial intelligence. Having the latest technology will help us explore these areas. I firmly believe that having this superb new facility will encourage more pupils to be interested in a career in digital technology, whether it be as a digital creative, for example, or a computer scientist. ‘

Tom Dore, whose dual role as Director of Education at the British Esports Association and Science teacher at King Edward’s School led to the collaboration between King Edward’s, Lenovo and Microsoft, is keen to highlight the benefits of esports and their role in helping to develop digital and other ‘soft skills’ in schools.

‘Esports take place within an organised, competitive human vs. human video gaming environment. It involves teams of people competing against one another, so it is very different from the stereotypical view of video gaming taking place on your own, in your bedroom, playing against a computer.

‘Instead, as a team-based activity, young people develop a range of character skills in the same way as they do through participating in traditional activities such as sports, drama, or music. Skills such as teamwork, leadership, communication, strategic thinking and problem solving are core to esports, as individual team members take up roles as players or analysts, or as team coach or host.’

For the last two years King Edward’s has entered teams in the British Esports Student Championships, which sees over 350 teams from schools and colleges across the UK playing online fixtures against each other on a Wednesday afternoon after school. Rather than playing from home, KES teams will now gather in the new facility to train and play fixtures.

The School won the inaugural CyberFirst Girls Competition organised by the NCSC and regularly competes in the British Esports Student Championships.

Lenovo (HKSE: 992) (ADR: LNVGY) is a US$60 billion revenue Fortune Global 500 company serving customers in 180 markets around the world. Focused on a bold vision to deliver smarter technology for all, we are developing world-changing technologies that power (through devices and infrastructure) and empower (through solutions, services and software) millions of customers every day and together create a more inclusive, trustworthy and sustainable digital society for everyone, everywhere.

To find out more visit https://www.lenovo.com, and read about the latest news via our StoryHub.

British Esports is a not-for-profit national body established in 2016 to promote esports in the UK, increase the level of awareness of these, improve standards and inspire future talent. They help to educate parents, teachers, media, policy makers and government around what esports is and what its benefits are. They focus on grassroots esports, education and working with young people.

This includes the British Esports Student Champs, a weekly competitive esports tournament for school, and the BTEC Nationals in Esports, the L2 & L3 qualifications they have developed in partnership with Pearson, that are now being taught in 86 centres around the UK. British Esports is also responsible for the Great Britain and Home Nations esports teams in international events such as the Global Esports Games and the Commonwealth Esports Championships.

Record numbers of students choose Computer Science A Level in 2022