How to get more black women into tech 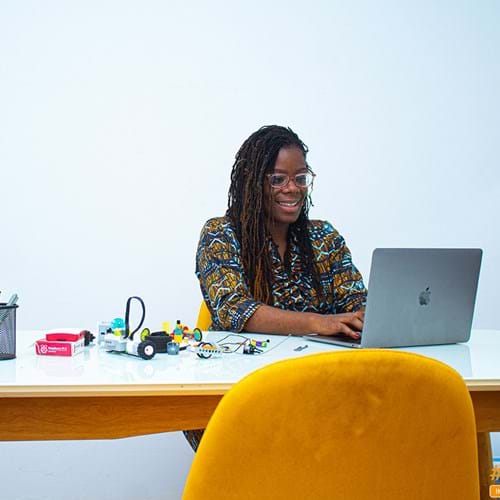 Paulette Watson, Founder and Managing Director of Academy Achievers tells Johanna Hamilton AMBCS about how she’s taking BAME IT students on a STEM learning journey from cradle to college.

The founder of Academy Achievers has achieved a huge amount in her career. From having a baby at university, to finishing her degree, then an MSc and MBA, working in the city, being headhunted internationally, and setting up a community initiative in a local church hall that would then turn into an initiative to get a million more black women in tech by 2030.

Paulette sites her daughter as her inspiration and the reason why she chose this path. ‘When my daughter Symone was a baby, I got a job in the private sector working in international banking. I was coming home late every night. I was commuting out of Blackfriars and the Strand. And as a single mother it was difficult.

'As my child got older, I started to realise she could read, but not understand fully what the text was about – her comprehension wasn’t there. So I did some voluntary work at her school and I realised that the whole class was failing, then I checked the league table and I saw that the school had been failing over a number of years.’

It didn’t take long for Paulette to find she wasn’t alone. Other parents were equally concerned about their children falling behind and wanted to do more. Paulette knew more had to be done for the children in her local community, so with the help of a handful of parents, she set up a Saturday school. Academy Achievers was born.

‘We set it up in our local church hall. In the meantime, I’d finished my degree and started working at my daughter’s school as Head of the ICT & E-learning department. Academy Achievers went from my daughter and a few of her friends to over 300 children. Plus, parents wanted more and more, from KS1 up to KS5. I worked in secondary, I had friends in primary, but it just became so overwhelming and difficult to manage, so unfortunately, I had to shut it down.’

Paulette then studied for her MBA, was headhunted to work in the USA and then Switzerland. Meanwhile her daughter was now at GCSE stage and aced all her subjects – doing particularly well in STEM subjects. It was now with the business woman’s head on, Paulette returned to her ideas on improving local informal education for children.

‘I wanted to work more at a strategic level for education. I became a school governor, NED, Director, and I was on the steering committee for the NUT for black teachers. When I saw how well my daughter had done at GCSE, I felt there was a need for me to be a role model for more women in tech and to go back to Academy Achievers.

‘So, I thought, why don’t I be creative and start a summer camp? I thought why don't I be cheeky and get the young people to come in during the summer break where they will be involved in the planning process, we will use coding and Robotics and incorporate, literacy, numeracy and creative arts into their summer time table.

'I literally used a cross curricular approached and combined it with STEM learning. So, we literally had this programme where the young people got involved with an AI robotic hackathon – which they won – then we became the host for the first Lego league for the next five years.’

Success breeds success, and as the momentum for Academy Achievers 2.0 grew, so did the demands of the parents. Not content with having their mainstream school age children in the programme, Paulette was persuaded to take on a pilot for including babies (early years baby and toddler music STEM session) and summer STEM camp for SEN students 2019.

‘It was a community collective approach. Nothing to do with me. I gave the parents and the young people a voice. Seriously, I saw Symone grow to complete her degree, and masters and now embark on her PHD and that’s the success story, it’s nothing to do with me, I was just the vehicle that channelled the idea. It was the community that made it grow.’

And grow it has. From a church hall in London Lewisham Lee High Road to an international movement designed to bring more BAME females into STEM. Paulette is committed to making the pipeline work, from primary to secondary to college to university – right through to looking at the culture in IT companies that will help to retain young black women in IT careers.

Award-winning success at home and abroad

Despite her modest protests, Paulette has also won a clutch of top international awards including Global Wintrade awards in women in engineering; Most Skilful Shepreneur for the Ghana Ladies in Tech (GLiT) 2021, Wintrade Global Award Women in Engineering 2019; Computer Weekly, listed on the longlist: The 50 Most Influential women in the UK Technology 2021; Finalist for National Diversity Award category Communication organisation Award for Age, ‘where I have dedicated my win to #BeMe project for getting one million BAME girls’ into science, technology, engineering, and maths (STEM) careers’.

With her MBA head on she is now seeking out the right sponsors to make her dream of a million more women in tech careers, happen. Looking at what made those early summer camps a success, Paulette has replicated it into a model that can be franchised over and over again, in different hubs, in different cities across the world. While many sponsors have been keen to align themselves with her good works, Paulette has been careful to choose only companies that reflect honestly and positively on her own brand.

‘I have been approached by a few tech companies. But it must be the right fit for the girls. I also don't want to be too successful too soon. I want to concentrate on that journey, and I want the girls to come with me on the journey. Google was in contact with us and want us to lead on Garage Band.

'We’re in partnership with Raspberry Pi delivering on the C.... Ciena our lead sponsor, had funded the 400 laptops. We have venture capitalists looking to invest in our #BeMe project to get a million more women into tech across the globe. We already have a sister organisation in Ghana and we’ve had interest in, Wales, Liverpool and Birmingham, France and Spain.’

So where is Academy Achievers going? Is it about more sponsorship? Mentorship? Diversification into new and exciting technologies including the metaverse?

‘It’s about developing the Web3.0 space and creating parity where young females can feel safe and secure.

To find out more about Academy Achievers visit academyachievers.co.uk