Skip to content
The two years since ITIL Version 3 was launched have seen the credit crunch and a recession, creating a difficult environment for business. Eddie Kilkelly, Chief Operating Officer, ILX Group plc, explains why IT managers should grasp this opportunity to communicate the business case for ITIL.

From its launch in the late 1980s by the government's Central Computer and Telecommunications Agency, the IT Infrastructure Library (ITIL) is now the most widely used IT service management approach in the world. Part of the reason for ITIL’s success has been its adaptability. The exponential increase in the use of IT during the 1990’s, followed by the internet boom, changed the number and variety of IT services on offer.

For customers, IT moved from being a peripheral service to being viewed as an essential component for competitive advantage, if not the core of the business. ITIL® Version 2 was launched at the end of the millennium to reflect those changes and link business needs with what IT could deliver. Yet arguably, ITIL Version 2 did not go far enough to reflect the pace of change and the needs of IT businesses in the internet and mobile era.

ITIL Version 3 was launched in 2007 to offer a more strategic, end-to-end approach to delivering commercial IT services that mirror the IT assets and life cycles in modern businesses. Yet some within the IT community viewed ITIL Version 3 as an upgrade to ITIL Version 2 rather than a step change, so there was no immediate imperative to change. Then in 2008 businesses felt the shock of the credit crunch, followed by the pain of recession.

History proves that continuing to invest in people, technology and service development can deliver real competitive advantage. However, many management teams have had to prioritise cost reduction and cash management as banks have restricted the credit available to businesses. As a result, most IT directors have had to put projects put on hold, reduce headcount or postpone capital expenditure.

Management may also be reluctant to support the introduction of ITIL Version 3, surmising that it will have implications in terms of time, effort and cost. This is true - IT staff will need to be trained in ITIL Version 3 and business processes will need to change; both will have an impact. Yet this could be significantly outweighed by a subsequent improvement in business results and operational efficiency.

Of those who had not trained all staff in ITIL 3, nearly half of respondents (49%) cited budget constraints as a barrier to uptake, while 41% said a lack of management backing and understanding was a primary problem. When asked why senior management do not support the introduction of ITIL (in any version), the main reasons given were lack of understanding (31%), lack of perceived benefits (25%) and budget constraints (24%).

Survey reveals key reasons why ITIL is not backed by senior management. 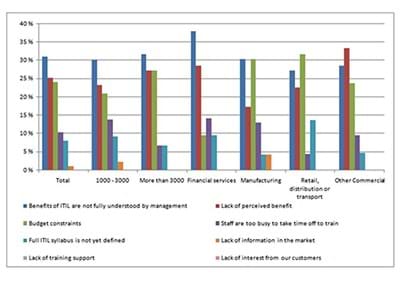 Over half (51%) of those surveyed believe that having staff qualified in ITIL would give their organisation a competitive edge. More importantly, when asked the primary reason for IT project failure, 34% of respondents cited poor communications to key stakeholders; 22% cited missed deadlines; 17%, the project going over budget; 14%, a failure to meet project requirements; 8%, that staff were not adequately trained and 5% cited a failure to meet the required quality levels.

ITIL Version 3 addresses each of these common failings and more. It can deliver huge benefits, enabling IT businesses to make better use of IT assets and infrastructure and helping to improve client retention, cost control and profitability - exactly what businesses need when resources are constrained. So how may IT directors persuade management of the case for implementation of ITIL Version 3 and allay cost concerns?

Focusing on the business case

IT directors and managers need to be fully aware of the benefits of ITIL Version 3, so they can communicate the business case clearly to the management team. In many ways, the recession helps to prove the case for ITIL; by ensuring that knowledge resides in the organisation rather than individuals, a reduction in headcount has less of an impact on the knowledge base of the IT team and business continuity.

Moreover, ITIL certification still infers that a business should be able to deliver better quality and more reliable IT services, potentially delivering competitive advantage in difficult markets. Yet ITIL Version 3 is not just about the technological aspects of IT service delivery.

It factors in financial and operational issues like the use of resources, costs, regulation and business strategy, which are of equal benefit to business managers. It helps managers to model the resources that are required to deliver IT services, leading to a better understanding of the consequences of following specific courses of action.

This can be used to improve decision-making around where cost savings or investment can and should be made. It also helps to reduce redundant capacity, when organisations need to maximise their productivity. Equally, this is the perfect time to re-evaluate the contribution a service makes to the company’s bottom line if rapid, iterative development has inflated the company’s range of offerings.

ITIL® Version 3 can help IT, operational and sales, and marketing managers to identify their less profitable services and provide justification for their retirement, unless outweighed by other factors such as retaining market share. Resources could then be redirected to other existing or new service offerings.

Whether the economy is in recession or growth, every company can benefit from a framework that links IT investment directly to financial reward while continually improving quality. In helping organisations to think, act, evaluate and communicate in a strategic manner, ITIL Version 3 reduces internal inefficiencies and helps IT to make a real contribution to the organisation’s decision-making processes.

Moreover, ITIL Version 3 creates a common approach and language between IT staff, suppliers, contractors and users within the business and with customer or partner organisations. This helps to promote better communication and understanding, reducing a leading cause of IT project failure. It may be possible for an IT director to quantify some of these benefits in financial terms, based upon past experience. When seen in that context, it would be even easier to prove that the implementation of ITIL Version 3 should be a strategic - and immediate - business priority.

How IT managers can reduce the barriers to implementing ITIL