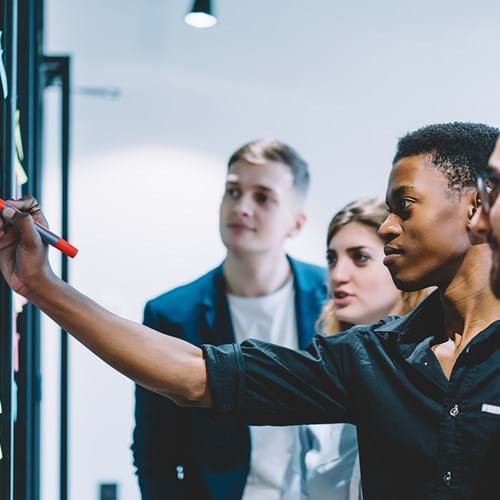 In 2004, there were 9,094 Blockbuster stores across the world. In 2010, the company went bankrupt. As of today, there is only one remaining branch in a small town called Bend, Oregon, USA. In an ironic twist to this story, a series about this very store is being filmed by Netflix.

Why this happened is no mystery. The company stuck to its existing approach even when mail-order and video-on-demand services were doing things differently. Over the course of a few years, customers shifted to the new services, leaving Blockbuster behind. Rather than adapting, the company tried to increase the profit it made from a dwindling number of customers. This only made them leave faster.

The company chose what it knew well over what people wanted. Despite having the information that the market had moved on, and the capacity to deliver it, the leadership stuck to what they had done before. It was no doubt easier - more efficient - to do this. But eventually it killed the whole company.

There are lessons to learn from this story even if you are not at board level. Both the context in which we operate and the tools we use are constantly changing. Every IT professional can play a part in updating the services they offer and keeping them relevant to the people they serve by asking, ‘Is there a better way to do this?’

When looking for fresh perspectives, most organisations look to the outside. They engage consultants, outsource projects, or seek knowledge-rich acquisitions. Whilst these approaches can be useful, they overlook the wisdom that is already present within.

Deviance - differing from norms of a group you belong to - has deeply negative connotations. We associate it with illegal and immoral behaviour. The concept of positive deviance challenges those associations. Research shows that, in any group, there will be some people doing things differently and therefore solving problems others are not. By seeking and supporting those people, then sharing their innovative approaches throughout the rest of the organisation, everyone benefits.

This kind of innovation is not a static process. Problems - and the tools to work with them - continually change. Organisations who continue to solve relevant problems are the ones that thrive. The organisations who cannot do this will inevitably become obsolete, just like Blockbuster.

This means committing to work with and understand diverse perspectives. Deviating from the conventional approach and taking a different path. Challenging long-held assumptions, trying out alternatives and supporting our colleagues to do the same. It also means actively looking for the divergent thinkers who can help us do this.

We often consider sensitivity a weakness. This is doubly true when you are sensitive to things others are not. Many neurodivergent people find specific experiences overwhelming and as a result are labelled ‘too sensitive’. However, such sensitivity underpins the ability to be aware of things others overlook - to spot the hidden bug and the unexpected solution which saves the project.

Differences in awareness create something else just as valuable: perspective. Over time, a different experience of the world gives rise to a distinct set of fundamental assumptions. This perspective allows neurodivergent people to perceive opportunities - and threats - which others cannot.

It is this ability to see things from a different angle which gives rise to ideas that make people say, ‘Why didn’t I think of that?’. Innovation is not just about coming up with clever new ideas, though, but about making them a reality. Providing support for this process is something many organisations struggle with.

Almost all organisations have formal or informal pathways for new ideas. However, there are very few where those pathways are truly accessible to the most valuable ideas, and the people who have them.

Even without intending to, the process for sorting the ‘good ideas’ from the ‘bad ideas’ often selects for ‘more of the same’. Those with the power to choose new ideas have the same perspective as the people who created the existing situation. They evaluate potential against their existing assumptions, rejecting anything which doesn’t fit. Genuinely novel ideas - and the people who suggest them - simply don’t ‘look right’. This is why both multi-platinum musicians and tech unicorns get passed over many times before finding a backer.

To make things even worse, many organisations have invisible barriers which prevent neurodivergent people from being able to get their ideas considered. Common examples are the need to fill in forms, write a comprehensive case, or present an idea to an audience. The ability to fulfil such steps has no bearing on the quality of the idea itself or the capacity of the person sharing it. Yet, if you cannot do these things, decision-makers never even hear your idea.

The issue here is not that there are barriers. With limited resources, it is only sensible to be selective about who and what gets support. The problem arises when those barriers don’t function as intended. When they act to keep out exactly the people and ideas the organisation most needs.

Unfortunately, this is not trivial to fix. Whilst valuable, awareness training and anti-discrimination policies are insufficient on their own. The issues arise from the way the people, ideas, tools and processes of an organisation interact with each other. We can only address them by working with all of those things.

There is not a panacea, a universal set of best-practices which can solve this. Anyone who tells you otherwise is trying to sell you something. The solutions to this problem are most likely to come from the very people who are suffering the most. Before they can do that, though, they need space in which to solve those problems.

One of the most effective things any organisation can do to generate innovation is to encourage and support the creation of places where people can share ideas, experiences and approaches with like-minded colleagues. These are less likely to be permanent physical spaces than virtual ones. Networks through which people can share, develop, and refine tools and ideas without the need to explain themselves first.

It is vital that these spaces fully belong to the people who use them. Adapted to the ways they like to think, communicate, and work. This is not about excluding others, but meeting the needs of those to whom the space belongs. After all, it is no harder for outsiders to participate in an adapted space than it is for their members to participate in a non-adapted one.

Such spaces are fertile places for radical new ideas. A breeding ground for positive deviance. They provide the support and protection necessary to develop innovative approaches without the unseen barriers. Once a solution is well-enough developed to stand alone, it is then time to share it, and the benefits it brings, with the rest of the organisation.

It is this type of change - that from a distinct perspective - which enables the whole organisation to engage with opportunities and avoid threats to which it would otherwise be unaware. It may not be efficient, but it is effective. And it is vital for the longevity of any enterprise.

This can only work if we involve everyone. Fully supporting neurodivergent people - and indeed all minorities - means doing things differently throughout the whole organisation. This is a feature, not a bug. It is by systematising the breadth of experience available that we can realise the many benefits that diversity offers.

This work is neither quick nor cheap. There is no off-the-shelf recipe. It is hard to be different. By working to overcome that difficulty, we solve problems not just for us, but for everyone. In doing so, we continue to keep the services we offer relevant and our organisations thriving. Just don’t forget to rewind your video tapes before returning them.

Matthew Bellringer MBPsS MBCS is a consultant-facilitator and educator developing the capacity to navigate uncertainty effectively. He works with people and organisations taking fresh approaches to deep-rooted, complex problem and specialises in work with the unique talents of neurodivergent professionals, academics and entrepreneurs. His background is in IT, Higher Education, psychology and entrepreneurship. He is chair of the BCS Neurodiversity Members Group.

Neurodiversity is the biological and psychological reality of the profound differences between human minds. The infinite variety of ways people experience the world.

Neurodivergent. Whilst a population can be neurodiverse, an individual who is significantly neurologically different from most around them can be described as neurodivergent. In everyday situations, this typically means experiencing the world in a qualitatively different way to societal norms.

Neurotypical. Neurotypical is the opposite of neurodivergent. It is to be neurologically similar to most people around you and to experience the world in ways broadly aligned with cultural norms.

Computing in society Careers and skills Diversity and inclusion