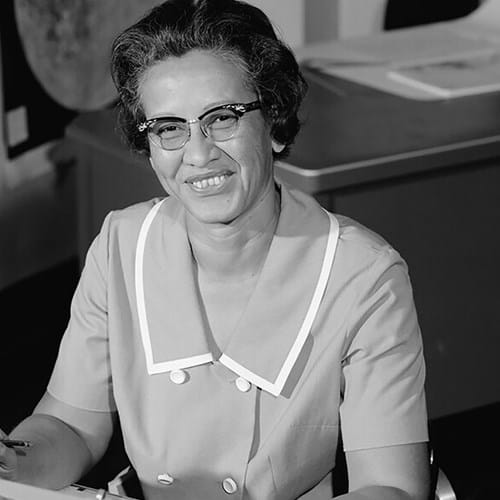 Ahead of what would have been her 103rd birthday, BCS celebrates the life and legacy of Katherine Johnson.

Born Creola Katherine Coleman on 26 August 1918, she lived to become a key figure in modern science - and a trailblazer for women in STEM the world over.

From humble beginnings in West Virginia, at a time when career aspirations for women - let alone Black women - were limited, nobody could have predicted Katherine Johnson’s career trajectory would reach as far as the Moon.

In fact, Johnson’s story is so incredible, it has inspired more than 10 books and a biographical movie that made over $230 million at the box office.

From a young age, it was clear Johnson had a talent for numbers. She loved to count. In fact, she counted everything:

‘The steps to the road, the steps up to church, the number of dishes and silverware I washed … anything that could be counted, I did.’

However, Greenbrier County where she grew up did not provide public schooling for African-American students past eighth grade. Not to be deterred, Johnson’s supportive parents found a high school - almost three hours away - on the campus of West Virginia State College (WVSC), that would accept her from age 10.

She graduated high school at just 14.

She graduated at 18 with first class bachelor’s degrees in mathematics and French.

How did she begin her career?

Following one of the only available career paths at the time, Katherine Johnson initially became a teacher. However, her outstanding achievements were not forgotten by West Virginia State’s president, who handpicked Johnson to be one of three academically gifted Black students selected to join the newly integrated school’s graduate scheme for mathematics.

It wasn’t until 1952 that Johnson would hear of a potential position in the computing division at the National Advisory Committee for Aeronautics (NACA - the predecessor to NASA) at the Langley Research Center.

She was accepted on her second application and found herself working in the office which housed the 'Human Computers', adept female mathematicians who were loaned to departments requiring their skills. She worked in the flight research team for four years until 1957 when Sputnik, the Soviet satellite was launched, changing history - and Johnson’s life - forever.

What did Katherine Johnson contribute to spaceflight?

As well as lending her technical abilities during the space race, the year after Sputnik launched, Johnson’s work featured in the compendium Notes on Space Technology. About the ground-breaking work she was involved in, she said:

‘Everything was so new - the whole idea of going into space was new and daring. There were no textbooks, so we had to write them.’

She became part of the Space Task Group, which managed NACA’s inaugural human spaceflight program. However, the societal barriers at the time hindered Johnson’s potential. Black employees at NACA were still segregated up until 1958, when the organisation became NASA. But of course, this didn’t stop there being deeply ingrained prejudices against women; Johnson later recalled not being allowed to attend any of the briefings at work and how she persisted:

‘The women did what they were told to do. They didn’t ask questions or take the task any further. I asked questions; I wanted to know why. They got used to me asking questions and being the only woman there.’

Women were also not credited for their work in NASA’s early years, so Johnson’s name still did not feature on the reports to which she contributed until colleague Ted Skopinski finally asserted ‘Katherine should finish the report, she's done most of the work anyway.’ The report in question? Determination of Azimuth Angle at Burnout for Placing a Satellite over a Selected Earth Position, which contained the theory that would enable America’s first human space flight, sending Alan Shepard into space in 1961.

How far did her legacy reach?

Although the ‘Human Computer’ division was disbanded in 1958 when NACA became NASA and digital computers were adopted, Katherine Johnson’s reputation endured.

When NASA wanted to send a team lead by astronaut John Glenn into orbit in 1962, a worldwide communications network was established, linking tracking stations across the globe to IBM computers (7090 and 709 models) in Bermuda, Florida and Washington. However, the astronauts didn’t trust the capabilities of the IBM devices, as they were liable to faults. Rather than put their lives at the mercy of machines, Glenn famously asked engineeers to go 'get the girl' - Johnson - to manually run the same equations that had been programmed into the computers.

Only when Johnson’s precise calculations were able to validate the IBM computations, did Glenn trust that the mission could (and would) succeed. (In fact, the prime computer did fail for three minutes during the Mercury mission, proving the astronauts’ fears!)

Johnson went on to work directly with digital computers, which eventually helped to foster confidence in the new technology amongst the teams at NASA.

In 1969, Johnson’s calculations were used once more - this time on the Apollo 11 Mission, which put Neil Armstrong and Buzz Aldrin on the moon. A year later, her backup navigational charts and quick, accurate calculations helped the crew of the unlucky Apollo 13 flight to return to Earth safely.

Although she never flew to space (indeed, she watched the first steps on the moon at home) without her incredible mind, it’s possible that space exploration may not have happened at all. 50 years later, aged 101, she was awarded the same medal as the astronauts in recognition of her contribution.

Katherine Johnson’s legacy lives on, not only in the ongoing work of NASA programs, plans for a mission to Mars and in a spacecraft named in her honour, but in the hearts and minds of women in STEM the world over. She blazed a trail to the stars and spent her later years encouraging women and girls to pursue careers in science, technology, engineering and maths: