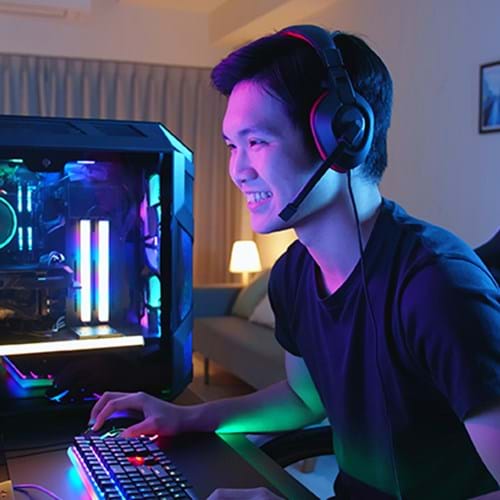 I have written before about growing up as a gamer and being an 80s bedroom coder. My past is filled with the ZX-81, Commodore 64 and the wonderful Amiga computers. The latter was very much not an IBM PC. That original PC specification was, to me, a dull, grey box for business applications that seemed to sneer at games from its very inception in 1981.

The 1985 Amiga was built on full colour visuals and designed to manipulate graphics and sound for great games. Single format computing platforms have their place, including games consoles. These devices thrive on being a known entity, a predictable base on which to provide a consistent gaming experience.

I am a multi-platform gamer, but the PC has thrived in our households for gaming. There are several things that will make this continue for a long time, not least in thanks to the pandemic, where computers bought for home working and schooling, will have also brought gaming options to many more people, too.

I bought my first home PC back in 1993 - solely because of Doom. Whilst the Amiga had lots of graphics power, the ingenuity of PC coders had created a genre-defining rendition of a first-person shooter that my favourite machine just could not seem run.

The purchase of a PC required some thought, as although there was a standard architectural base, there were lots of options to consider in the parts list.

My earliest business machines at work had lots of memory but no sound card and we mainly compiled C++ on them. My home machine was a different beast: it needed to be the optimum specification to run Doom, or there would be no point in getting it.

The choice and the upgradability of the machine is what adds an extra dimension to PC gaming and is missing from the other platforms. Over the decades, this choice has amplified and is ever-evolving.

When Carmack and Romero and the rest of ID Software built Doom, they too had scope and choice for how far to push the specifications needed to run the game. Striving to push the performance of a game against ever-improving hardware led to the meme ‘Can it run Crysis?, referring to the 2007 first-person shooter by Crytek, which, at the time of release, had monumental specifications to run in full fat mode. You just would not intentionally build a console game that couldn’t run on the spec of the console. If you accidentally do (here’s looking at you, Cyberpunk 2077), it does not go down well.

Just to highlight the ‘How to max out a PC’ trend, when Crysis was remastered in 2020, a new graphics setting in the menu was entitled “Can it run Crysis?”, intended to fully stress the current generation of gaming rigs.

One of the most important PC-related innovations and one that just keeps getting better, is the PC’s graphics card. Early machines were all about the CPU and memory but soon, companies like Nvidia and AMD started to increase the power of PCs with GPUs. Rather than the general-purpose grunt of a CPU ,the GPU is focused on a specific set of tasks. From this has emerged the latest high-end processing requirement for ray tracing in games.

A game must provide a full view of a scene at high resolution at 60 or more frames per second. Graphics programmers have come up with lots of very clever ways to provide the illusion of reality, such as baking lighting into a scene, where shadows or reflections are effectively precalculated or approximated. Levels of detail on graphic models alter depending on the distance from the player and particle effects and shaders create clouds and mist.

When we look around our physical world, we see the results of billions of light rays bouncing off or being absorbed by surfaces. In computer graphics, ray tracing plots as many of those rays as possible, bouncing around as many surfaces as the algorithm can deliver in time to produce a believable image.

Ray tracing has been a ‘thing’ in graphics as far back as I can remember. Back in the late 80s, I certainly created some chrome spheres and coloured boxes in a scene and ran a ray tracer, waiting a whole 48 hours for it to create one image at 640x480 pixels in 4096 colours – slow but rewarding.

Early in the first lockdown, I looked at my gaming laptop with its quite high-end graphics card, but no ray tracer, and thought ‘What the heck’ and bought a desktop rig, just so I could get some lovely ray tracing working.

I know how it works but it is utterly astounding that it will generate a 4K image at 60-120 frames every second, using dedicated hardware just for beams of light, combined with Artificial Intelligence to assist - just in the graphics card. Not only is it really pleasing on the eye, as an expression of gaming art, but full reflections impact gameplay.

How many times have you seen James Bond spot the reflection of a bad guy behind him anywhere from a window to wine glass? Situational awareness and immersion are a function of how believable the images are. Not all games need to be photo realistic, but there is room for ultra-realism as much as for cartoons; they all benefit from GPU grunt.

The Xbox Series X and PS5 consoles now have ray tracing ability too, but those consoles are still in short supply after their 2020 release. Scalpers have made it difficult to get these and all sorts of tech in the pandemic, including PC graphics cards (such as the latest Nvidia 30x RTX cards) but the previous 20x series are out there and readily available.

I never buy the top spec of PC kit, I aim at about three quarters of the maximum and they always last for several years before needing a refresh. These graphics cards are now so part of the makeup of a gaming PC, most housing is glass-sided so you can see the card. They often have fancy LED lighting systems on the card itself and there are even ones with small screens on them to report their status, or show a game logo. They’ve come a very long way from the grey boxes of the past.

Consoles do have extra peripherals, I have my Nintendo Bongos on the shelf here, but the PC is the place to find and chose the right thing to enhance your game. That goes further than hardware, too, with many games having modding communities and tools that further extend the experiences.

Again, consoles do have lots of user-generated content in games but the level of access a PC user has to their own system to apply patches or mods - official and unofficial - makes it a future-proof and innovative eco system.

We have seen huge games emerge from indie developers, such as Minecraft, which went from a 2009 beta to a £1.5bn purchase by Microsoft in 2014. It is now one of the most played games in history. Currently, on PC game distribution system, Steam, the game Valheim was released for early access in 2021(where players play yet to be fully completed games and often shape the development). Since then, the five-person developer team have seen concurrent player numbers online exceed the all-time top levels of GTA V online and Destiny 2.

Games of all sizes and shape can arrive - seemingly out of nowhere - and be shared widely. We are also very much in a digital download age, such as with Xbox Game Pass Ultimate, where games can be accessed on a subscription basis across consoles and PCs, enabling people to try new game genres they may not have played before.

You would have had a great deal of trouble finding a PC flight stick in stock when the Microsoft Flight Sim 2020 hit game pass, as people tried it out and then expanded their experience with a peripheral.

The uniquely flexible and configurable nature of gaming PCs and the ability to choose how much gaming horsepower you want to add to your games means a long and happy future for the gaming PC. Yes, it has its downsides: constant patching of drivers and things crashing in odd ways due to the user’s own extremely specific collection of devices and installations, but when it’s tuned exactly right, to play what you really want to play, that’s the pay off.

Of course, you can also still write documents (like this one) and surf the web, listen to music, create art and stream movies just like many other devices.

Ultimately, we may all be cloud gaming in the future. It will be a while before the network is strong enough for us all to do that, but each of us will then be accessing the latest and greatest hardware as a service, probably a PC.