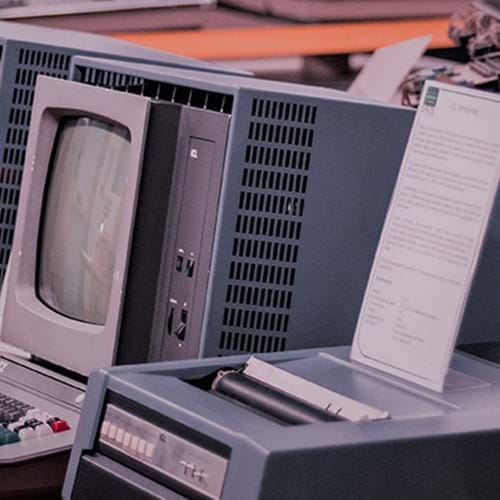 ‘I can tell you the moment it began,’ says Simon Lavington, as he begins to explain why he’s dedicated so much time to studying and writing about computing history; why he’s written six books on the topic - the most recent about Ferranti; why, in 2016, he catalogued his personal collection of British computing artefacts and arranged for them to be placed in various national archives. ‘This needs to be done... urgently,’ he says. ‘Artefacts that are worth preserving and need ongoing curatorial care.’ His, he admits, were in his garage.

The story starts in 1967 when Lavington, then at Manchester University, saw a photograph of the Ferranti Mark I in the Manchester Evening News. The caption read, ‘the world’s first commercially available computer.’

Lavington had graduated in Electrical Engineering from Manchester University in 1962. He knew a little about Manchester’s computing history and, upon reading the 1967 article, smelled a journalistic slip-up.

Tom Kilburn was a computing pioneer. During a 30-year career, Kilburn was involved in the development of five computers of great historical significance. With Freddie Williams he worked on the Williams-Kilburn tube and the world's first electronic stored-program computer - the Manchester Baby. His work put Manchester and the UK at the forefront of computer science.

But, Lavington persevered. ‘Over the next two or three years, Tom softened and began to tell me a little bit about the history.’

Lavington’s most recent research and writing focus on Ferranti. Founded in 1882 by Sebastian Ziani de Ferranti, Ferranti Limited grew to be a national and international electronics giant.

The firm was headquartered in Hollinwood, Greater Manchester and specialised in defence and industrial electronics, as well as heavy electrical equipment. In the late 40s, the firm began developing computers. Their first machine was the Ferranti Mark 1, which was completed in 1951. ‘It was the world’s first production computer,’ Lavington says. ‘The first one - the first of nine machines - was delivered on the 12 February 1951.’

Explaining more about the times into which the Mark I was born, Lavington says ‘curiously, America at the time was producing computers, none were exported for the first few years… partly for security reasons. In that era, these new universal computers were seen as a strategic resource by governments. Export was regarded with suspicion.’ This meant, more by happenchance than design, Ferranti in the early 1950s was the only supplier of computers to the rest of the world.

But was there anything special about the Mark I? ‘The Mark I was the first machine on the market to have a random access memory,’ Lavington explains. ‘This was at a time when most of the prototype computers had sequential main memories. Random access is to be desired from the perspective of performance and ease of programming. The Mark I also contained index registers - these are now part of every computer. So, it was potentially easier to program than many others.’

The Mark I’s storage configuration consisted of a primary RAM store (implemented as Williams-Kilburn tubes) and a secondary hard disk store (implemented as a magnetic drum). In 1954, the Mark I received a primitive high-level programming language called Autocode. ‘This was the first time that, from the end-user’s point of view, a primary and secondary memory were transparently integrated.’

The Mark I’s working life was productive - both publicly and in secret. Predominantly, the machine worked on applied science and engineering applications. One machine went to Canada, where it found a home at the University of Toronto. One of its first jobs was to do all the civil engineering calculations for the Saint Lawrence Seaway - a system of locks and canals and dams in Canada and the US.

‘The calculations involving soil movement and flooding were significant,’ Lavington explains. ‘It was estimated that they would have taken an engineer twenty person-years on a conventional electro-mechanical desktop calculator of the time.’ The Ferranti Mark I did it in 20 days. In Italy, a Mark I Star (an upgraded Mark I delivered to Rome) undertook stability calculations for the Vajont Dam. The dam was completed in 1959 and, at the time, was said to be the tallest dam in the world.

A Mark I Star also found a home in Holland, where it was housed in Shell’s Amsterdam laboratory. ‘In many ways, that machine revitalised Europe's war-torn petrochemical industry,’ Lavington explains. ‘It was delivered in 1954 and it’s believed to be the first computer - anywhere - to have been bought as a commercial venture rather than through direct or indirect government funding.’

Expanding the point, Lavington says: ‘Up until the mid-1950s, deliveries of computers had largely been related to defence and other government preoccupations.’

This leads to the tantalising question about the Mark I’s secret life. What did it do for governments behind closed doors? With a tremulous laugh, Lavington says: ‘Yes. Indeed... well, one of the British government’s preoccupations was nuclear weapons.’

‘Following the McMahon Act, Clement Attlee decided to go it alone and produce a British nuclear deterrent,’ Lavington states. ‘This involved a huge amount of theoretical calculations, for which a digital computer was essential. The early calculations were done on a Ferranti Mark I in Manchester until Aldermaston was ready to receive its computer... Aldermaston was a redundant RAF base. Its Mark 1 Star was installed in 1955.’

The arrival of this Ferranti Mark 1 Star was the first in a long line of high-performance supercomputers that were installed and put to work in Aldermaston.

‘The other secret preoccupation was cryptanalysis,’ Lavington says. ‘Bletchley Park was the site of huge innovation during the war... ending up with Colossus. After the war, GCHQ didn’t immediately find an interest in early general-purpose computers.’

Partly, this reluctance to embrace computers may have been down to their unreliability. Lavington also believes GCHQ’s coolness towards computers may have been because, in the immediate post-war years, GCHQ was investing very heavily in rapid analytical machines. ‘These were special-purpose code-cracking devices in the style of Colossus. Each, such as Oedipus, was dedicated to a particular problem. They were much quicker - roughly 10,000 times faster - than general-purpose computers of the time.’

Eventually, GCHQ came round to the idea of general-purpose computing and ordered a Ferranti Mark 1 Star of its own. It was installed in 1953 and then modified by the Cheltenham research centre itself. The machine was finally set to work in 1955 and given the enigmatic name: Cleopatra.

The end of an era

In the fullness of time, The Mark 1 began to show its age and so Ferranti began working on Pegasus and Mercury. The firm itself went on to produce mainframe computers until the 1960s. The most famous was Atlas - a machine that was rated as the world’s fastest computer in the early 60s. Atlas was, Lavington explains, a project he worked on. ‘I’ve got a soft spot for Atlas.’

Sadly, Ferranti’s days of dominance came to an end. While it specialised in scientific computing, the wider computing market shifted to commercial data processing. By the time it awoke to this market shift, it was too late. In 1963, it sold its mainframe business to International Computers and Tabulators (ITC became ICL in 1968). Finally, in 1987, Ferranti bought the American firm, International Signal and Control. Behind its polished balance sheet, ISC hid a dark arms trading business and non-existent profits. The debacle saw Ferranti plunged into bankruptcy in 1993.

All but one of the nine Mark 1s were scrapped - except the one, which went to the British aircraft maker Avro. In 1966, most of it was donated to a proposed new computing museum. The museum project met delays and so the machine was stored in a disused sewage pumping station. In 1973, Lavington was part of a group that ‘rediscovered’ the machine, but it was in a sad and unredeemable state. So, it was divided up and parts sent to museums around the world.

If you have any memories or artefacts related to the Mark 1 and particularly its life inside Avro, please contact ITNOW’s editor at editor@bcs.org and we can pass them on to Professor Lavington. Lavington’s book - Early Computing in Britain - is published by Springer.