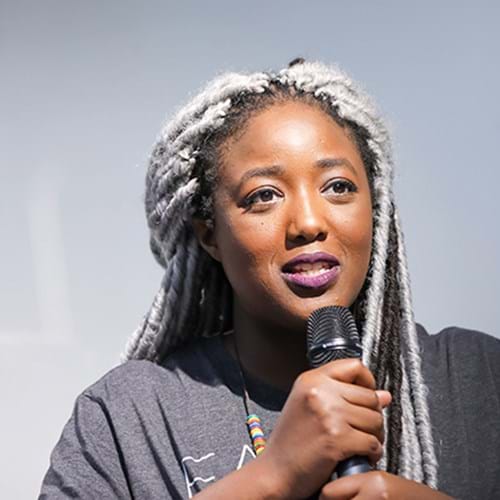 At ten, Anne Marie had an A level in Computer Science; by the time she was 19, she’d already been awarded her MSc by Keble College, Oxford. Now an entrepreneur, Dr Imafidon and her non-profit organisation, Stemettes, are making tech accessible, interesting and even desirable for females - who currently make up just 20% of the UK IT workforce.

We're at 24% now across the whole of STEM, so I think it will happen. I think the question is just how long will it take? That's what my obsession has been. How quickly can we get to this point? What are the big levers that we can push to get there and how can we do it as efficiently as possible?

Are awards a valuable part of highlighting your work?

Last year, Computer Weekly said I was the second most influential woman in tech. I wanted to get to number one and not just go straight into their ‘hall of fame’. It was a great award to get, but generally, I don’t go in for awards, they’re not really my thing.

I think some awards are just about companies trying to associate themselves with diversity. You have not done the work or invested in it, so why do you think giving an award is a shortcut for the work you should really be doing?

I got an award from booking.com and it came with funding. I didn’t apply for it, but I know there's so much work I'm now going to be able to do to double down on the reason they gave me the award in the first place. I hope this is part of a new trend of not just giving awards, but giving some kind of tangible forward-looking action along with it.

There’s certainly an argument for that. It’s the same as quotas. People don't want to be somewhere because they're a token - and if you have to manually override the system and say, ‘We're going to choose a black woman this year’ for an award or an honorary doctorate, then that's literally what you've done.

There can be a black square and companies still end up not choosing a black woman. If you think about it, historically there's lots of people that have been left out of a lot of these discussions, such as non-binary folks.

I get to meet a lot of women trying to enter the industry or coming over here from different countries and the experiences that they have, even in women-only spaces, are awful. If their first language isn’t English, if they’re a different race, have a disability or are pregnant...

Whereas now, if it takes that for you to say, ‘Well this year we are going to intentionally choose that person’ then you literally are admitting failure up until now and you're learning from those failures.

So, it’s misogyny and racism?

Misogynoir. I can't separate them. I've always been young, black and female. So, if someone is going to not listen to me, I can't unpick which of those three or which combination is causing it.

As a woman, there's a lot of value you bring and there's a lot of people that won't appreciate that value and so part of your job is to make sure that you're in the right environments. If you're not listened to, you make the most of that situation and then you get out of there. You find your tribe.

Tell me about ‘doing your own thing’?

I’ve just had a meeting with the Open University. We did our trial with them over the summer and had more than 100 girls gain cyber and python certifications as well as an IOT stream working on networks and dev ops. Giving a 13 year old exposure to these five different things opens their mind to entering some 500 different jobs - but also the possibility that they can keep moving and keep evolving.

You don’t have to stay in the same place at the same job, being invisible. For technical women, there are so many things you can do in so many places with people that are more likely to listen to you.

Was this mindset what made you found Stemettes?

I worked for the Grace Hopper Celebration of Women in Computing in 2012. That year there were 3,500 women there and I'd never been in an all-female technical environment in my life, but I'd always been in technical environments. It was amazing. You know, those chats in queues at the ladies’ loos, hearing a data scientist at bit.ly, and someone complimented me on my laptop and my shoes - I was like ‘If only people knew being in tech could be like being in London Fashion Week!’

There were brand parties at Grace Hopper, so there was an exclusive Twitter drinks; there was a Pinterest party in the hotel where you had to say a secret word to get to a balcony where software developers were making dream catchers... I started to wish more people were able to experience this wonderland.

So, I started Stemettes. I thought, if girls and non-binary young folk could see that it doesn't have to just be ‘dude bros’ with beards and that you can do your own thing on climate change or food waste. I wanted to show girls that they could have the time of their lives, with their peers, creating great tech and apps that make a difference - and make them want to move into tech careers.

Is it about showing girls that tech can be creative?

Absolutely. We have to stop thinking about computing and IT as something that's just for mathematical people, because it's incredibly creative. You don't think of English as something that's just for English people or just for writers. You need to understand you've got reading, writing, arithmetic - and digital. We need the digital on the end as another brush you can pick up to explore your creativity.

Also, digital literacy is incredibly important. If you don't understand English in an English-speaking country - you can't get about. If you don't get digital, you end up being a second-class citizen, who can’t file a tax return, sort out a library card, apply for a parking permit, or even renew your driving licence. If you don't have that digital literacy, then you're trapped. You're at the mercy of whoever it is that is controlling the tech. Tech is a power, a superpower at this point being used by those in power to maintain their power.

How do we get more IT into schools?

I didn't like my IT experience at school, and for that reason, I tried to avoid going back into schools with Stemettes. Before COVID-19 hit, Stemettes was doing school trips. Even now, we're virtually going in for assemblies and classes and all that kind of stuff but really, we're trying to build this out of school community in the same way that you have it for dance or football. It needs to be something people can choose to explore outside of the confines of the curriculum.

A couple of years ago, research suggested that around 43% of people working in the IT industry didn't have a single IT qualification. So, this idea, that if you don’t opt to do a GCSE in IT means you’re lost to computer science forever is ridiculous. In my experience, tech is moving forward all the time and the curriculum being taught is often already out of date.

That’s why a lot of the girls at Stemettes will do courses about Devops, net etc until the cows come home every half term. But they won't choose computer science at school, GCSE or A-level. They might choose a degree but they don't want to be in that classroom because it's so far from the reality of what tech is.

Education is often highly elitist, very exclusionary in the whole way it's set up. ‘We know more than you do and you can't be in our club unless you've suffered yourself doing research’, or whatever it is. If this is something that's for everyone, you can't do that. It's not sustainable.

You can't say digital schools for everyone in one breath and in the next say everyone must learn it in these puritan ways because systems like that don't work. That's the beauty of computer sciences, there's lots of different applications, lots of different ways to approach it. We need to look at teaching and bear in mind that if you do what you've always done, you'll always get what you've got.

What does a good future look like in IT?

A good IT future is ultimately no Terminator Two but also about achieving balance. Seeing women in IT as much as we see men. I think we definitely need to get to the point where, as an industry, we've unlearned some of those terrible habits from the past two decades.

It's still not too late for us to say, ‘Let's build that better and this time we're not going to value technical competency on particular things above all else’. We're going to understand that when we build this tech, we're building it in a way that it probably is going to end up ubiquitous. From the beginning, we all actually need to value perspectives alongside technical capability.

There's no point just building, as everyone always says it's not about the tools, it's about the adoption - it's about the people that are using them. So, I think for me, good would be the right kind of balance in technology. Good would actually end up being that for every progression that we have, for any innovation we have, we have the fail safes that have been developed alongside it, which at the moment is not the way tech works. It’s built, it goes to the highest bidder and then afterwards there’s the realisation, ‘Oh my gosh we forgot women exist’.

I think for me, good is just sensible. Balanced.

What advice would you give to hiring managers?

Pick someone different. Even if it’s not every time, every second or third. Pick someone different to you, who doesn’t have a computer science degree from Oxford. I think that’s the latest loop we have to go through. It's tough, but that requires people at the top to prioritise this and to say this is important.

Just for once, pick someone that doesn't look like you. And believe them when they open their mouth. That's such a revolutionary idea, to just believe that the woman knows what she's talking about.