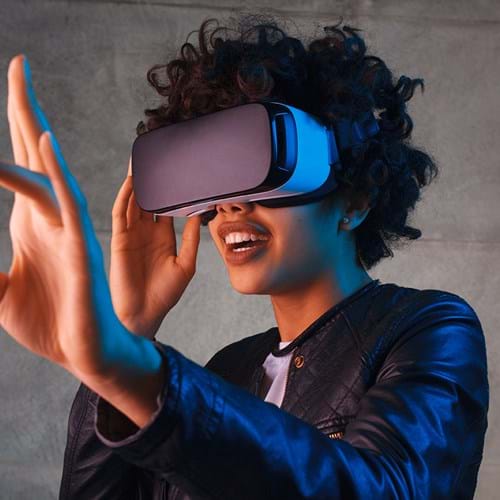 Thanks to Facebook, the metaverse concept is a hot topic. Dr Ian Hughes, Chair BCS Animation and Games SG, takes us on a tour of tomorrow’s virtual worlds.

“Travelling and actual teleportation aside, do you think that we should be able to find better ways to feel we are with people and to have shared experiences?” “Many games are virtual worlds but not all virtual worlds are games.”

You will have heard the word metaverse a lot over the past few months, with more than a few articles written, but here is another one - from the perspective of someone with decades of activity in the industry.

As early as the turn of the century, I was trying to get virtual world technology, inherited from the games industry, into enterprise use. This got some traction in 2006 when a group of us in IBM (initially in Hursley) started to explore the potential of Second Life.

This grew from a few of us with an unofficial blog called Eightbar, which evolved into a cross company movement of over 8,000 people. My actual business card had ‘Metaverse Evangelist’ written on it; my son’s birth certificate has it as his father’s profession for posterity.

During the Wimbledon tennis championship in 2006-2008, we created a social and data-powered experience, live in a virtual world. All this, and many more community projects and customer interest, led a global emerging business unit formed by IBM to investigate where this could all go. There still is a very large community of us from then, from all walks of life, with experience gathered and ideas to share.

It’s great the metaverse concept is back - I don’t think it ever went away. Also, we weren’t the first to explore this. Here, I will explain why this is an important evolution for us all. Yes, Facebook did rename itself to Meta and put out a lot of metaverse PR, but this article isn’t all about them, nor only about Microsoft Mesh, Nvidia Omniverse, Niantic, Virbela, Roblox, VRChat, Rec Room, Sinespace, Sansar, Second Life, the list goes on...

What is the metaverse?

The metaverse was forged in science fiction. It was the term used specifically in Neal Stephenson’s Snow Crash in 1992 (you can now mark off a standard phrase on your metaverse buzzword bingo card). Writers like William Gibson also have a significant place in its literary life.

At its core, the metaverse is a unified way for people and things to interact in a virtual and spatial capacity. A collection of virtual worlds, which includes our physical one, make up the metaverse. It’s often reduced to the idea of a giant virtual world by a single company but the pure concept is an evolution of an interoperable internet, now spatial.

It doesn’t only have to be a computer screen with avatars wandering around, nor does it have to be experienced in virtual reality (VR), nor is it always projected onto the physical world with smart glasses or headsets for augmented reality (AR). It is all, or any, of those and will evolve to be much more.

With the web, using the internet, we were initially presented with the basics of text and hyperlinks. That steppingstone has quickly developed into where we are today. The metaverse is yet another step, helping our interactions with people and data, more suited to our evolution as spatial beings than to any technology restrictions.

We experience things around us, learn and grow based on that, yet we stare at flat screens, talk into a phone or type words in order to communicate at distance. Travelling and actual teleportation aside, don’t you think that we should be able to find better ways to feel we are together with others and to have shared experiences? That is the role of the metaverse.

We need to start somewhere, hence avatars and virtual spaces are a logical place to begin; there are plenty already up and running and many more on the way.

Is the metaverse just for gamers?

Having spoken to thousands of people about virtual worlds and the metaverse, written papers and science fiction novels, I have heard a lot of objections to the technology. Is it just a new-fangled computer graphics powered concept?

The popular objection is someone claiming not to be a gamer, which leads them to not consider the idea of moving around and talking in a virtual space. Many games are virtual worlds but not all virtual worlds are games. Not that long ago, qwerty keyboards and even mouse / trackpad / touch screens didn’t exist - we all accept those to navigate applications.

We will evolve better ways to move around virtual environments, we know how to move around the physical world, whether deep in important business discussions on the golf course or kicking a football around with the kids.

These interactions are not objected to in the same way as a 3D, computer-mediated spatial interaction. Objections to evolving technology are fair enough, but have we reached the pinnacle of human communication and technology right now? I would suggest we have a way to go...

Another objection is that it’s ‘not a serious business’; the metaverse is just for escapism. Yes, there are places and things to escape into, just like losing yourself in a good book, but that’s not all. In Second Life in 2006, as a programmer, I first tried to figure out how to pull data into the environment.

This included x,y,z of tennis ball trajectories in a rally (gathered from Hawkeye) and the control of an internet connected lamp (before we used the term IoT). I also connected with people: we met, shared ideas and built things together. Those relationships remain today, decades on. I think there is enough evidence to show we are not considering escapism as the primary reason for the metaverse, so we can knock that one on the avatar’s head.

Then, there are virtual goods - the ‘I want to own the real thing!’ challenge. I am not going to get into an NFT conversation about provenance, cryptocurrency and blockchain - that’s a different conversation. Digital assets are virtual. So are enterprise software systems, operating systems and avatar clothing - they are all virtual. You can, of course, turn some digital things into physical things, like 3D printing a model. It is the relevance of digital assets that is the core of the objection. You hear ideas like: ‘We’ll pay for cloud hosting, an app on a phone or to stream movies, but we won’t pay for an avatar t-shirt.’

The metaverse and the video chat paradox

Let’s consider the massive rise in the use of video-based meetings. Pre-pandemic enterprise remote meetings used voice teleconferences. Almost overnight, Zoom, Teams et al. became the norm for people suddenly working from home. Webcam tricks, formerly only used by geeks, such as replacing real backgrounds with something virtual rolled into the major applications.

These changes were adopted to help achieve privacy and to also project an identity or contribute to a sense of belonging. The Celebrity Squares video representation of people is mentally wearing and some cameras get turned off. Microsoft announced that a coming release of Teams will feature the ability be on a video call as an avatar (something, again, us geeks already do). Rather than a flashing border on a blackened circle, people will be able to choose to use avatars responding to them, adding a new comfort option. This is a refreshing way to remove the mental load of staring at a camera.

I used an avatar to present a recent BCS Animation and Games event called What’s all this animated dancing? It felt very good. With this feature sitting in an application, people will give it a go and actually feel the difference. Once represented by an avatar in 2D, it’s a short step to render the meeting room as a 3D space, giving a sense of where everyone’s sitting in relation to one another. This is a mental anchor point to any meeting and makes it more memorable to us as the meeting happens somewhere.

This is just the start

For the future, don’t just look at the technology and norms we have today. Think about what’s missing from your human experience when you interact at distance. Accepting the adage, you can’t beat being there; just how close can we get to that? Advances in holographic projection, without glasses, movement sensing and bio signs, haptic feedback, olfactory generation, neural interfaces, the list goes on...

Whether writing, talking, meeting, presenting, singing, acting or movie-making, we seek to convey something to an audience and to connect. The metaverse will eventually be another medium for this, not replacing these things but enabling and enhancing them.