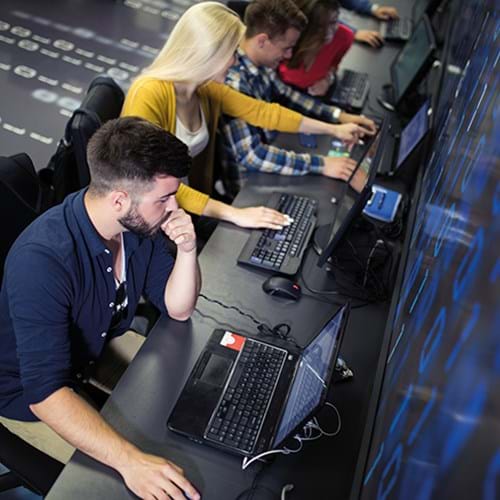 Prof. John Stein, Magdalen College, Oxford, explores how dyslexia works and explains why the condition might be a profound positive when it comes to designing software.

‘I knew early on that my dyslexia made me a very good trouble shooter of electrical equipment and computer code, as I could see the complete system in my mind and visualize the solutions.’ (A successful dyslexic working in industry)

Unfortunately, as many as a third of all 18-year olds in the UK & USA leave school unable to read, write and calculate even as well as an average 11-year old. This leaves them tragically ill equipped for modern life and they face a life of probable failure, unemployment and mental distress.

This costs us all dearly; KPMG (a professional service company and one of the big four auditors), estimated that the resultant mistakes they make, their unemployment, necessary retraining, their mental ill health, plus their all too frequent frustration, anger with life, their antisocial activities, violence, and crime, costs the UK c. £2.5 billion per year. Clearly, we ought to be doing something about it.

However, two thirds of these young people are probably not dyslexic. Their illiteracy stems from low general ability interacting with adverse social circumstances, poverty, lack of parental support and poor teaching. It has been shown conclusively that they can be helped by better school support, especially concentrating on the teaching of phonics.

But the remaining third (10 per cent of all school leavers - c.100,000 18-year-olds per annum) are truly dyslexic and are not much helped by drumming them with phonics.

Developmental dyslexia is defined as reading significantly below the level expected for an individual’s age and general intelligence, as assessed orally and by non-verbal tests. There is usually also a strong family history; and about a dozen genes have been shown to contribute to the basis of dyslexic problems. Many dyslexics have very high non-verbal intelligence, but they tend to have a dreadful time at school because so much depends on reading and writing.

Since most teachers learn very little about dyslexia in college, dyslexics are often treated as lazy and stupid. But, actually, their brains seem to be wired differently from others. Clearly, we need to discover what these differences are if we are to help them.

And help them we should, because often their different brains provide them with exceptional talents - other than reading. The genetic background that underlies their brain differences would not have survived the implacable processes of natural selection unless they carried some worthwhile advantages.

And dyslexics are indeed over-represented, not only among software engineers, but also among other kinds of practical engineers, artists, architects, entrepreneurs and scientists. Why should this be so?

The essence of reading is linear sequencing - working out the order of the sounds made when a word is pronounced and the sequence of its letters when it is written down. Successful sequencing depends on timing - for sound, timing when the sound [d] of ‘dog’ occurs, then the [o], then the [g]. For vision, it is necessary to clock when the eyes or visual attention move, e.g. to look at the letter ‘d’, then the ‘o’, etc, in the written word ‘dog’.

This timing is mediated by specialised neuronal systems throughout the brain, the ‘magnocellular’ systems. They are named thus from the Latin word magnus meaning big. Large nerve cells in the brain respond and signal faster than smaller ones, because their large surface area can receive more inputs and their larger axons can propagate their electrical signals more rapidly to the next cell in the chain. Obviously if these neurones do not develop properly, then these timing functions are compromised.

The crucial discovery, then, for understanding dyslexia, is that dyslexic subjects show a genetically-based impaired development of these magnocellular timing systems. There is now overwhelming genetic, immunological, anatomical, brain imaging, electrophysiological, psychophysical and behavioural evidence that dyslexics as a group have reduced ‘magnocellular function’. This has been most clearly demonstrated for the visual magnocellular system, but recently it has become clear that the auditory equivalent shows the same kind of deficiencies in dyslexics.

This means that both impaired visual and auditory timing and sequencing are probably the fundamental causes of dyslexia problems. Thus, we are now beginning to develop a good theoretical background as to how dyslexic brains differ from ordinary brains. I’ll call them ‘ordinary’ because dyslexic brains are in some ways quite extraordinary.

With regard to dyslexics’ talents and creativity, what we need to understand is how successful dyslexics compensate for these weaknesses in timing and sequencing. This depends on two interdependent processes. First their magnocellular weaknesses alter the development of their brain pathways compared with good readers.

Later each individual dyslexic develops his own cognitive strategies to work around his academic problems. Recent imaging studies have shown that different brain networks can develop varying strengths even in identical twins, presumably driven by their different environmental experiences, including their education. Dyslexics are notorious for the ingenious strategies they develop for overcoming their sequencing difficulties. Thus, these will also influence the further development of their brain pathway trajectories.

The most common of the strategies that dyslexics develop to survive, is to use various kinds of ‘mind maps’ - setting out the components of a task on a single page covered with different drawings, colours and arrows between them.

These help because they allow visualisation of the whole problem at one moment in time, so that no temporal sequencing is required. It has often been suggested that dyslexics have superior visuospatial talents, but it has been difficult to demonstrate these. This is because ‘visuospatial’ is too general a word and it does not capture the true nature of dyslexics’ strengths.

This requires skill at contemporaneous ‘holistic’ judgements, rather than comparisons over time. Dyslexics’ favouring of static comparison is due to both their genetic inheritance and the brain biasing that occurred throughout the development of their brains. This bias would have been amplified by the cognitive strategies that they developed to compensate for their sequencing difficulties.

Early in the development of the brain, beginning when the foetus is only three months old, a huge number of nerve cells are born. But 90 per cent are destined to die. The only ones to survive to adulthood are those that serve a useful purpose in representing the outside world and our possible actions, mediated by the connections they make with other nerve cells. These mature over childhood but are still relatively ‘plastic’, even into old age.

A dyslexic child will develop fewer magnocellular neurones, hence in that desperate competition for survival during early development, other neurones, many of them smaller ‘parvocells’, (L parvus = small) will have more chance of success in making useful connections, and the balance of the brain pathways will shift to smaller cells. Their function is not timing, but detail; in the visual system they detect the tail on a small o which makes it into an a or the subtle differences between b and d.

This preponderance of parvocellular connections, which tend to be more long-range, means that dyslexic brains are much better at associating detail from widely different parts of a static visual scene than comparing across time.

Thus, they are quicker and more accurate at spotting impossible static constructions such as Escher’s drawings of impossible waterfalls, Penrose’s triangles and his impossible stairs. Most of us have to move our eyes from one side of the picture to the other to spot its contradictions, but many dyslexics can see them all at once.

What has all this got to do with computer coding?

Dyslexics are not exceptionally good at writing simple code; however, the sorts of coding ‘spelling’ mistakes that dyslexics tend to make are nowadays automatically corrected by the compiler. Rather, their genetic inheritance and the way their brains are set up during development, help them to become good systems analysts and software designers, rather than simple programmers.

Their exceptional skill is to be able to visualise in their minds, possibly in several dimensions, a whole problem as a static picture, rather than to analyse it as a series of linear sequential processes in time, which is what most ordinary brains are taught to do. This ‘holistic’ skill enables dyslexics to spot much more easily potential short cuts or inconsistencies and problems with the overall structure of the software.

The successful dyslexic quoted at the beginning of this article wrote:

‘I progressed from a mere maintenance electrician to a process control programmer writing code for electrical equipment to talk to PLCs and other computers for a large steel mill. The same visual skill I had for troubleshooting electrical equipment I also had for debugging code’.

The converse of this is that dyslexics can often see useful connections between different parts of the system that others do not see, and this talent can greatly simplify and optimise its operations. Thus, dyslexics make great system designers and software engineers, from which good coding follows.

Another reason why dyslexics’ coding is better than their reading is that computer code syntax and notation is totally predictable. It may be unforgiving in that if even the tiniest detail is incorrect, it simply will not work, but it is completely consistent, unlike English spelling!

Hence dyslexics, aware of their weaknesses, can work hard at spotting and rectifying their mistakes, in the knowledge that visualising and memorising that particular code will always work, wherever and whenever it appears.

Hard practice at this visualisation enables them to do this more reliably than non-dyslexics who can make the same mistakes, but do not have the benefit of the lifetime of hard work spotting them that dyslexics have had to learn to accept as the price of their success.

In summary, therefore, many dyslexics make great software designers and programmers because their genetic endowment and their developmental trajectories enable them to develop unusually talented brains.

In particular, they excel at static holistic analysis - visualising the whole system in their minds, spotting patterns others don’t see, seeing potentially economical short cuts in their 3D mind maps of the proposed code, avoiding inconsistencies in it. But they are not good at the linear sequential analysis which ordinary brains are good at.

Computing in society Diversity and inclusion