The high standard and sheer variety of works produced under what might be termed ‘computer art’, never ceases to amaze me and if you are as intrigued as I am to discover what your colleagues and fellow aficionados of the computational process have produced over the course of 2012, then read on.

Richard Colson has been working on creating a real time painting system with a Kinect game controller and Processing. He tells me, ‘Processing looks at the data coming from the webcam and I have used Simpleopenni wrapper for Processing to get the controller to recognise my hand positions and paint with pixels in that area.’

The image gives a sense that it is shifting and fracturing before us, as if it is able to be altered and even re-arranged at a moment’s notice - perhaps reflecting the different facets of Richard himself. A user of computers for thirty years, he is also a highly successful painter working in oil.

This year he has been teaching Processing and Arduino to students on the BA Digital Film and Screen Arts programme at University of the Creative Arts Farnham, as well as a visiting tutor at the Slade helping students to implement interactivity with sensors and electronics. He is the author of the popular book The Fundamentals of Digital Art, a student essential that does exactly what is says on the tin.

Anabela Costa is a filmmaker, working with moving image and experimental animation at the intersection between art and science. The computer allowed her to create movement in her drawings and photography, as the classic animation film process never pleased her. She explains, ‘the aesthetic of the representation of movement is really what moves me on!’

For this work she used ArtiE-Fract, an interactive evolutionary software designed for artistic exploration of the space of fractal 2D shapes. Fractal art could not have developed without computers because of the calculative capabilities they provide. Due to collaboration with artists the ArtiE-Fract system itself has evolved in order to better fit the needs of non-computer scientist users.

New artistic approaches have been recorded such as Anabela’s innovation which exploits the morphing utilities provided by the software in order to create videos. Although abstract, Anabela’s images invite the viewer to see ethereal images such as clouds or birds and angels in flight. 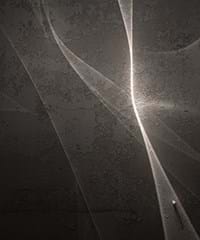 Dario Lanza is a specialist in rendering and says, ‘I’m particularly interested in experimenting with the folding and bending of the light medium and the digital realm provides the perfect scenario to recreate that phenomenon.’ I think this is seen to particularly beautiful effect here, from the series Visions of Infinity, which he developed throughout 2012. Although the image is entirely artificial (generated by a 3D program), it comes from the accurate recreation of the natural phenomenon, mimicking the real conditions.

He starts first with a 3D object made of water or glass (or at least, made of digital water or glass), but that stays out sight. Any tiny movement of a vertex on the original shape ends up in a dramatic distortion of the beams and a different pattern of light.

Dario comments that forcing the rendering software in entirely different ways from how it was designed to work results in a custom and unique procedure that provides him with full control over the resulting aesthetic. This allows enigmatic images that look somehow familiar, halfway between realism and abstraction, and confront the viewer with primitive and spiritual feelings.

Fabrizio Poltronieri has developed his own software in C++ language to create images such as this one that have no external index, i.e., they are the result of pure mathematical manipulation at random of a given set of data contained within the computer memory.

This image (the exquisite detail difficult to appreciate here in a thumbnail), comes from the series ‘Visual Theogonies’, named after the term ‘Theogony’, borrowed from a poem written by the Greek Hesiod in the late 8th century BC. The poem deals with the process of the birth of the Greek gods, and therefore the software receives the subtitle of ‘images of the computational god’, as in this case the gods are transmuted in the will of the computational algorithms.

Theogony is a poem that represents a phase of Greek thought in which there were no links between cause and effect, where the gods existed by and for themselves and time was not calculated chronologically. That is a period of purely magical relations, where one fact did not explain the other, but gave rise to multiple and open interpretations.

Thankfully Brian Reffin Smith’s brain appears to work differently from almost everyone else’s. In 2010 he posted to the CAS list his 43 Dodgy Statements on Computer Art – humorous yes, also very prescient. It’s difficult to pick just one, but this might be my favourite - No. 18: ‘Just as everyone has a novel inside them, many believe they have an artwork. The purpose of a good art school is to seek out these people and stop them.’

Now based in Berlin, Brian is a pioneer of computing and education, both in Europe and the UK where among other things he devised early paint programs and, at the Royal College of Art, he was the first College Tutor in Computers in Art & Design in the early 1980s (this was among the first purpose-built computer studios in UK art schools).

These days Brian says he tries to use very simple processes to make a conceptual art that could only really be made using the computer. So I was thrilled to receive this image from Brian earlier this year of the artist’s own hands. It was made using ImageJ medical image processing software.

It was good to discover that Cybernetics theory still has relevance today. Andrew Welsby’s project at Glasgow School of Art involves the use of cybernetics theory and data analysis as qualitative research tool to explore his hometown of Glasgow.

Situating himself at the centre of an auto-anthropological investigation of the city’s landscape, Andrew explains, ‘The intention was to focus on my surroundings in new and different ways, creating a system for observing, and feeding back observed information, in order to create a visual analysis based on cybernetics theory.’ For 21 consecutive days during the summer of 2012, he took a photograph from his exact location at midday facing precisely north.

Using self-authored software, statistical sampling was collected from sixteen equidistant points in each photograph to obtain accurate colour information as it was distributed about the photograph. The resulting shape is a data visualisation of the colour contained in the photograph, or a graphical representation of a north facing direction from his position at noon.

This produced unique visual artefacts, representing a subjective and active engagement with the urban environment. For me, the aesthetic is reminiscent of the group of pioneering computer artists at the Slade Art School in the 1970s.

It's been a tumultuous year due to the pandemic. Rebecca George OBE took over the helm as BCS President just as the lockdown came into effect. Here, she reflects on her year in office.

After stalling for a generation, the numbers of women choosing IT careers is at last on the up, writes Johanna Hamilton AMBCS. Six BCS fellows share their thoughts on boosting females in STEM careers and make suggestions for not only for attracting, but retaining women in the IT workplace.

There is a myriad of reasons why women choose not to pursue a career in STEM. It starts with a lack of role models and cascades down through perception, culture, pay, working conditions... It’s complicated, writes Johanna Hamilton AMBCS.