Skip to content
Johanna Hamilton AMBCS interviews Sarah John, Chief Cashier of the Bank of England about the decision to feature Alan Turing, the father of Computer Science, on the new £50 note.

As the 33rd Chief Cashier, and only the third woman in the role, Sarah is responsible for everything to do with the lifecycle of banknotes in the UK: from their design to their production, through their issuance, and right through to their destruction at the end of their use.

‘When we started thinking about who to feature on the £50 note, we got together what's called our “banknote character advisory committee”. This is a group of external and internal people to think about what topic we would like to celebrate on our next note. We chose science.

‘We then asked the British public, “Who would you like us to put on the banknote?" The public nomination process lasted for six weeks, starting in November 2018. We had an absolutely fantastic response, with over 227,000 nominations. This was then whittled down to 989 scientists.

‘Alan Turing, the so-called father of computer science, was nominated by a lot of the public, but it wasn't a popularity contest. We looked at every single one of those 989 nominations as a committee; including mathematicians, astronomers, chemists, physicists… and after some very interesting debates, we chose a shortlist of 12. We put the list to the Governor of the Bank of England, Mark Carney, and he chose Alan Turing.’

Would Turing have been your choice?

‘Turing was an absolutely amazing mathematician aside from codebreaking and I think he’s a great person to celebrate on the £50 note for his work on early computing.

‘I think it was in 1936 that he wrote his seminal paper on Computable Numbers. That paper really set out the blueprint, if you like, the very bare bones of what we would now recognise as a computer; the idea of a machine that could solve any computable problem. The concept of that was in that 1936 paper, which, before computers, would have been seen as science-fiction at the time. It's absolutely fantastic.

‘Computers are all around us. It’s how we work, it’s at home, it’s in our pockets. So, that legacy really heralded the start of Computer Science - and for me, that's what we're celebrating on the £50 note.’

What eligibility criteria does a person have to have to be on a note? Do they have to be British?

‘Here is the concept of the bank note… So, this is quite a well-known portrait of Alan Turing from the National Portrait Gallery by Elliott & Fry. But if you go beyond that, the imagery shows what the note is celebrating. On the left-hand side is an equation taken from the 1936 paper on Computable Numbers. The table is a representation of a Turing machine - the model of an early computer that Turing came up with in that paper - while the equation underneath represents the operations of a Turing machine to compute the fraction one-third in binary.

‘Sitting behind that, is the ACE Pilot machine. That was built in 1950 at the National Physical Laboratory and Turing was actually involved in the design of that ACE machine. It was one of the first electronic stored program computers, so really quite an important computer in terms of computer history.

‘In the background, you can see the technical drawings of the bombe - the code breaking machine that he helped develop while he was at Bletchley Park during World War II. And we've also got some schematic diagrams from the ACE machine in the background as well, so there's those early computing references.

‘You'll see looped throughout there's ticker tape with binary numbers. In his 1936 paper, the Turing machine concept had ticker tape being fed in, the computation happening and then a 1 or a 0 being printed. What the tickertape on the note represents is Alan Turing's birthdate in binary. It's the 23rd of June 1912, so it's the number 23061912 written in binary code.’ 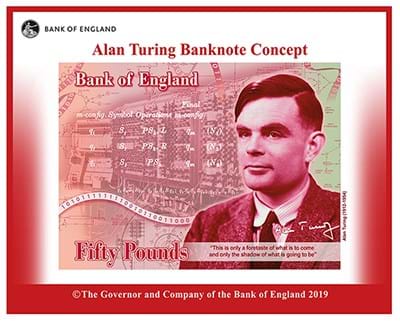 Visually, it is quite busy. Do you have to add a lot of elements to prevent forgery?

‘What's great about the choice of Turing, is that quite a lot of the work that he did lent itself quite naturally to banknote design. Some of the images of the bombe machine, for example, are great features to be able to come up with nice, intricate designs.

‘One of my favourite bits of the banknote is the quote, taken from an interview with the Times newspaper in 1949. Turing said: "This is only a foretaste of what is to come and only the shadow of what is going to be." And for me, that just really captures the fact that Turing just saw how important computers were going to be at a time when the idea was almost inconceivable.

‘In fact, the Turing test is still used today to tell whether something has true artificial intelligence. So, whether it can do something in a way that's indistinguishable from a human being doing it. I think that foresight is absolutely fantastic.’

Do you have to keep changing notes to prevent forgery?

‘Every-so-often, we like to make step changes in the technology that's used. One of the best examples actually was back in the 60s when colour photocopying became available. At the time, that meant that Central Banks suddenly had to innovate quite rapidly in terms of security features.

‘The big change that we've made recently is obviously the move to polymer and away from paper; this will be the first £50 note to be printed on polymer. We really hope that that will be a step change in anti-counterfeiting. Counterfeiting in the UK is actually quite low anyway - fewer than 0.02% of notes in circulation are counterfeit, so it's quite rare that anyone would actually come across a counterfeit. But the experience of countries who've already moved to polymer is that the level of counterfeiting does fall quite significantly because it is that much more difficult for counterfeiters to replicate the polymer banknotes.’

How traditional is bank note production in the 21st century?

‘I still employ artists, but these days they use a computer rather than a pencil or a paintbrush. The actual printing itself is still done using engraved plates that would have traditionally been rendered by hand, but are now transferred electronically.

‘There are two main forms of printing on a banknote: one is called a litho-printing, then we use a very special form of printing called intaglio for the Bank of England, the Queen's portrait and a few other features just on one side of the note.

‘Using the £10 as an example, the clear window with a metallic design over it has quite an intricate design that can't easily be replicated using a standard printer. While there is a certain amount of intricacy in the note to make it as hard to copy as possible, it's really specific features that we're using now that have got holographic effects or de-metallisation in them that have are much harder to copy with current print techniques.’

Turing's working in computing and cryptology has led to the creation of crypto-currencies. Do bank notes have a future?

‘It is quite ironic that we're celebrating Turing on the £50 note, just as the use of cash for transactions is declining. But, while it is in decline, there are still around two million people who predominantly use cash for their day-to-day transactions, and it still accounted for around 28% of transactions last year; the second most popular form of payment after debit cards. The headlines suggest we're going to go to a cashless society tomorrow - but I believe we're actually quite a long way away from that.’

Will it be smaller?

When will the Turing £50 note be released?

‘There’s still quite a lot of work to do, taking the concept from artwork to putting everything together into a working banknote with all the relevant security features. However, we expect the Turing £50 note to be released by the end of 2021.’

User experience (UX) is a rapidly growing specialism, essential to the design of modern technology. Vanessa Burgar DipHE MSc QTS CITP discusses what knowledge is needed for successful practice and considers how can we provide education for aspiring UX professionals that is fit-for-purpose and strengthens professional identity.

The big interview: Language and cybersecurity