Professor Gordon Plotkin FRS FRSE leads this year’s Lovelace lecture and will review progress in both probabilistic and differentiable programming.

He was awarded the 2018 Lovelace Medal for his invention of 'structural operational semantics' and his contributions to a range of other topics.

This lecture is in association with Arm.

Vote of thanks: Jane Hillston, University of Edinburgh

Programming languages are central to computer science. They are of enormous practical importance and they are a source of intriguing theoretical questions. It is particularly exciting when the two come together. There is increasing evidence of this in machine learning, and so, in this talk, we explore a nascent area: languages for learning.

Probabilistic modelling and inference, and deep learning are two prominent examples of machine learning. In both cases one builds up a model and combines that with observations to generate hypotheses.

In the first case, one typically samples from a distribution over hypotheses; in the second, one typically seeks a hypothesis optimising an objective function. As models and observations become larger and more complex, one needs tools to generate and handle them; it then becomes increasingly natural to seek specialised programming languages. Probabilistic programming languages have already appeared. In the area of deep learning we have yet to see them, but there is a general perception of the interest of differentiable programming languages (differentiable, as one needs to calculate gradients in order to optimise).

In this talk we review progress in both probabilistic and differentiable programming. In both cases there are fascinating challenges of combining mathematical requirements with programming desires: one needs mathematical notions general enough to apply to the application, in one case of probability distributions, and in the other of differentiation. In both cases one wishes to accommodate as broad a range of program types and computational effects as possible.

There are other areas of machine learning and one can ask whether programming notions can also help there; reinforcement learning may provide an example. We also ask if there is commonality to the various forms of learning. After all, they all involve methods of producing hypotheses from models and data. Encouragingly, as we explain, there are semantical notions which seem to embody that commonality. Perhaps, one day, these may be usefully incorporated in programming languages to provide a common framework for languages for learning.

Vote of thanks: Jane Hillston

Jane Hillston was appointed Professor of Quantitative Modelling in the School of Informatics at the University of Edinburgh in 2006, having joined the University as a Lecturer in Computer Science in 1995. She is currently the Head of School.

Jane Hillston’s research is concerned with formal approaches to modelling dynamic behaviour, particularly the use of stochastic process algebras for performance modelling and stochastic verification. She has developed high-level modelling languages for application domains ranging from computer systems, biological process and collective adaptive systems. Her PhD dissertation was awarded the BCS/CPHC Distinguished Dissertation award in 1995 and she was the first recipient of the Roger Needham Award in 2005. She has published over 100 journal and conference papers and held several Research Council and European Commission grants. 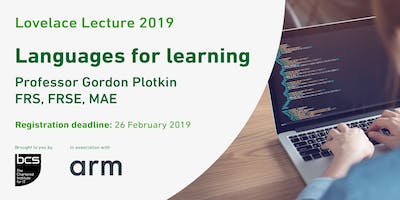