In the early 1960s Ferranti Wythenshawe developed the Argus (200) computer as the launch controller for the Bloodhound guided missile. In 1962 they decided to enter the process control market and use the same technology for Industrial Process control and the Automation Systems Division (ASD) was created. One machine had been installed at ICI Fleetwood and in mid 1963 another had been installed at West Thurrock Power Station.

Ferranti recognised that the Argus (200) was too expensive and not flexible enough and a new computer, the Argus 100, was created (the original Argus was renamed Argus 200). Jodrell Bank had one of the first machines to control the new Mk 2 telescope. The Argus 100 was a serial computer. A parallel version (A300) was developed later. A100, A200 and A300 used Germanium transistors.

Ferranti however had decided that Integrated Circuits we the future and developed the Micronor 1 range. From lessons learned a more commercial range, Micronor 2, was being designed in 1963 with a specification that was better suited to computer design and the Argus 400 was planned as the initial offering. This was deliberately chosen to be a serial computer like the Argus 100 to reduce the complexity of the mechanical and logic design.

The Argus 400 presented many design challenges. A range of integrated circuits needed to be developed and put into production. Ferranti had to learn how to layout and make multilayer PCBs and to plate through holes to connect track on the various layers.

John will describe his role in the development of first the Argus 400 (as his first ever logic design) and will include an overview of the architecture of this computer. His role progressed to the development of the range of standard peripherals (printers, tape and card readers/punches and magnetic tape) needed to operate the computer and the wide range of specialised interface devices to interact with the process control plant. The Argus 400 was initially designed to be an airborne computer and it fitted into a standard aircraft case.

A parallel version, Argus 500, was designed later and a modified physical design made A400 and A500 computers plug compatible.

John Steele joined Ferranti Wythenshawe in July 1963 having just graduated from Manchester University with an Electrical Engineering degree. He chose this course around 1958/9 when he went on a trip from school to see the “new” Mercury computer.

John’s first project started about three months after he joined Ferranti and was presented with the challenge to do the logic design for the Argus 400 computer. This was Ferranti’s first computer to use integrated circuits. These were developed in-house alongside the logic design. John went on to design many of the I/O controllers which ranged from standard I/O peripherals (paper tape, printers, card reader, magnetic tape etc.) but also included the wide range of specialist controllers needed to interface to process control plant controllers.

The session will start with registration at 14:00pm, talks starting at 14:30pm, finish by 16:30pm. Refreshments will be provided. 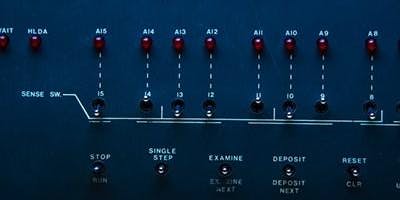