This year’s Karen Spärck Jones lecture will be a virtual event with three speakers who will talk about their research.

The lectures will be introduced by BCS President, Rebecca George OBE, and hosted by Prof Carron Shankland, University of Stirling.

Jess Enright : Graphs and networks both theoretical and practical
I’m planning to talk about how my research has taken a number of unexpected turns, and how I’ve ended up working on practical topics that I would never have expected to be involved in during my very theoretical PhD. I’ll outline some of the projects I’ve worked on and mention both the delights and challenges of this kind of work.

Angela Sasse: Cyber security’s biggest vulnerability? People are the weakest link
The meme “that cyber security is a chain, and people are the weakest link” has been circulating in the IT security community for the best part of 3 decades. Research in usable security has demonstrated that the security policies and mechanisms prescribed by experts create impossible tasks for employees and consumers, damages productivity of organisations, and leaves vulnerabilities attackers profitably exploit; based on this the UK National Authority for Cyber Security NCSC declared the phrase to be wrong and harmful. Nevertheless it still is a fundamental shared belief among security practitioners and part of the research community. A key consequence is that resources are poured into measures to “raise awareness” and “educate” employees and consumers about cyber security - it is estimated that globally, more than $1 Billion is spend on so-called anti-phishing training alone. In this talk I will explain why this approach is provably ineffective, and how these resources could be more effectively spent on technology and risk management processes that improve both security and productivity.

Jessica Enright
Jess Enright is a lecturer in computing science at the University of Glasgow. Her main research interests are in graph theory and network epidemiology, but she’s also a big fan of combinatorial games. After a theoretical PhD on algorithmic graph theory at the University of Alberta, she branched out to practical epidemiology, and now spends time working between the practical and the theoretical. During the 2020 COVID-19 pandemic she has been contributing to network modelling of disease spread and control on a variety of different projects.

Dame Wendy Hall
Wendy Hall is a Regius Professor of Computer Science, Associate Vice President (International Engagement) and is an Executive Director of the Web Science Institute a the University of Southampton. She became a Dame Commander of the British Empire in the 2009 UK New Year's Honour list, and is a Fellow of the Royal Society and the Royal Academy of Engineering. Dame Wendy was co-Chair of the UK government's AI Review, which was published in October 2017, and is the first Skills Champion for AI in the UK. In May 2020, she was appointed as Chair of the Ada Lovelace Institute.

Angela Sasse
M. Angela Sasse FREng is the Professor of Human-Centred Security at Ruhr University Bochum in Germany, and Professor of Human-Centered Technology in the Department of Computer Science at UCL. Before starting her research and teaching career at UCL in 1990, she obtained an M.Sc. in Occupational Psychology from Sheffield University and a PhD in Computer Science from Birmingham University. Since the late 90’s, her research has focussed on Human Behaviour in IT, and in 1999, she co-authored the most cited paper on the topic “Users Are Not The Enemy” with her then student Anne Adams. She was the founding Director of the UK Research Institute for Sociotechnical Cyber Security from 2012-2017, and a Fellow of BCS, The Chartered Institute for IT and the Royal Academy of Engineering. 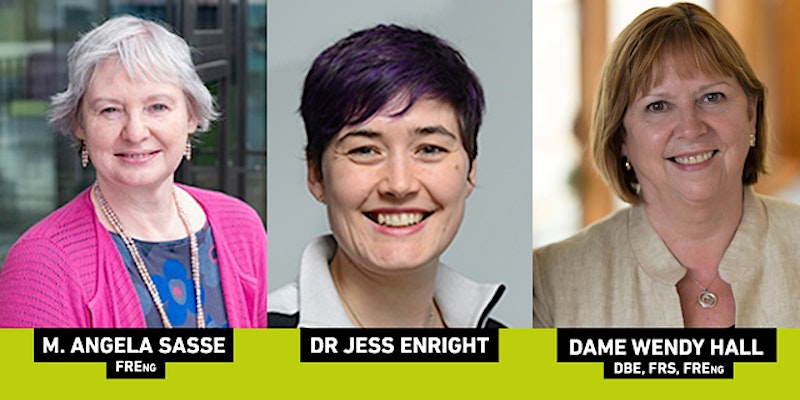