Andy drew on his own expertise and experiences in computing and asked if we can do more to appreciate and promote the importance of “art” as a feature on the interdisciplinary landscape?

Dr Andy Harter CBE FREng FIET FBCS is a distinguished innovator and entrepreneur. He was Director of Research and Engineering at the influential AT&T Cambridge Laboratory where he led many hardware and software projects through to commercial exploitation.

He was responsible for VNC software and its seminal role in establishing the remote access market. The technology is on over a billion devices, is on more different kinds of computer than any other application and is an official part of the internet.

He has an MA and a PhD from Cambridge University, where he is a Fellow of the Computer Laboratory and chair of Cambridge Network. He has received numerous awards, including the Silver Medal and MacRobert Award from the Royal Academy of Engineering and the Faraday Medal of the IET. In 2017 he was awarded a CBE for services to engineering. 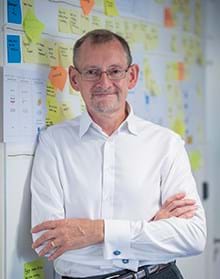