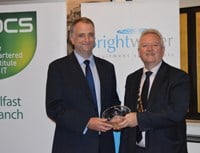 John Healy was awarded the Northern Ireland IT Professional of the Year Award for 2015 because of his exceptional dedication to the technology sector in Northern Ireland over the past decade and, most recently, his work as Chair of the Panel that developed the MATRIX ICT and Digital Foresight Report 2015.

John graduated from Queens University Belfast in 1992 with an engineering degree and then completed an MSc in computer science before joining the J P Morgan investment banking company in London. He returned to Northern Ireland and spent a short period with Liberty IT before becoming the CIO for Grafton Group in Belfast. Following over 3 years in this post he moved to become the Head of Technology at Citi’s new Technology Centre of Excellence in Belfast. Under his leadership and direction Citi has grown in size from nothing to a delivery centre with well over 1200 employees.

John has been a pivotal force in growing and finding talented IT professionals and he established Citi’s Technology Academy, and in 2010 some 37 students successfully graduated from the academy. In 2014 John announced the creation of 600 new jobs in Belfast and Citi now employ almost 2000 people in their Belfast offices.

His contribution to InvestNI’s work on attracting inward investment to Northern Ireland has been exemplary and has been an avid supporter of the hugely successful Software Testers Academy that took people from non-IT disciplines and provided conversion courses to enable them to change career paths and become highly sought after IT professionals. He has given freely of his time to support schools by providing numerous talks aimed at attracting young entrants into the sector.

John Healy has exhibited the personal characteristics, commitment, dedication and willingness to go that extra mile in support of the IT industry in Northern Ireland that sets him apart as a true IT professional and a worthy recipient of the Northern Ireland IT Professional of the Year Award.

IT Professional of the Year