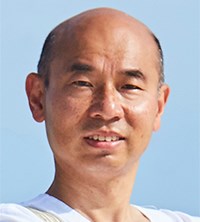 Tell us about yourself and what inspired you to study technology?

When I was growing up, I spent my Sunday’s at my grandparents with all my cousins and my mum’s siblings (large family). There were no computers or internet in those days, so we had to amuse ourselves with board games, running around etc. One day my uncle bought a RadioShack TSR-80 micro computer system, and we started playing a simple text-based Space Invader type game from the cassette tape drive. I got curious enough to start modifying the game by experimenting, and I started trying to find out how I can learn more about this.

When and why did you choose to study BCS Higher Educations Qualifications?

Going back a few decades, there was only one main university in Singapore, and I found out that to get to do a computer science course at university, or to find a job in this area, requires being qualified on a number of fronts.

I enrolled in evening courses, first learning to program in Basic (I was the only one still attending school as everyone was a working adult). I then found out from others in my class that they were doing a Computing Diploma that would lead to a BCS HEQ to enable them to apply to universities in the UK. I must say I was fortunate to be exposed to this world, so I sign up for this diploma program would lead to a BCS Diploma Part I as it was known when I took the qualification.

How did gaining BCS HEQ Qualifications help you in your career?

First, it enabled me to have the opportunity to apply for studying in the UK.

I got offered a place at DeMontford University (previously known as Leicester Polytechnic). Upon completion I would gain a Graduate Diploma in Computer Studies, and also achieved the BCS Diploma Part II, which then enabled me to go straight into a Master’s programme. It was equivalent to a BSc Honours degree, and I was delighted that I was accepted for the Master’s degree course at the London School of Economics.

So, whilst I was doing my master’s degree at LSE, I started applying for jobs in the hope I could secure a role when I finished the course. I saw an advert in the Careers notice board at LSE looking for a programmer for a publishing company. I attended the interview and they asked what I do in my spare time.

I said I was working at MacDonald's whilst studying, and they said they would be happy for me to start immediately. As they said the rest is history as I spend nearly 3 decades in the publishing industry, helping the companies I worked which for transformed from no computers and internet to becoming digital businesses – major publishers like RELX and Wiley.

You have been a BCS Member for many years and have been actively involved with your professional community, what have been your highlights?

Although I have been a BCS member for more than 3 decades, I only became actively involved in 2013 when my team won an award at the UK IT Industry Awards, the Oscars of the IT industry. BCS approached me to be one of their judges, and since then, I have been a regular judge.

The biggest highlight was when Covid-19 hit the entire world, and when IT professionals are deemed to be ‘heroes’ in helping their organisations to keep the business going through remote working, as a parent, I found my children and their school struggling with getting online for their education.

I then found out from other leaders that it is a big issue that impacts not just school children, but many segments of the population who have been unable to be part of this digital world that we took for granted. So, in Dec 2021, I was delighted that together with other BCS members, we all felt compelled to do something about addressing the digital divide and established the BCS Digital Divide Specialist Group as a member-led initiative in support of this societal problem, which is also one of BCS’s strategic priorities.

As chair of this SG, I now have an opportunity to socialise to, and mobilise its 63,000 members to help with this, working with other organisations and communities through #JoiningtheDots.

Why would you recommend BCS Higher Education Qualifications to someone else?

If you are interested in IT or computing but felt like you don’t have the right qualifications or confidence, I hope my story shows it is possible to not only get a skill, go to university, but also the top job as the most senior IT leader in the organisation.

If you had one piece advice to your younger self, what would it be?

If you have a passion for something, go for it. Don’t let anything stop you from giving it a go (including your inner voice that says you are not good or qualified enough). If there is a will, there is a way.

What is the best piece of advice you could give someone looking to enter or move into an IT career?

The barrier to entry is no longer an issue. It is easy these days to even learn from watching YouTube videos, or sign up for bootcamps that are typically days and weeks, not years to learn a skill and start a career in IT.

Also, an IT career is not purely about programming. I don’t write code anymore, but every day, I feel I have the best job in the world to help my company and team engage in problem solving and solution design!

Finally, join the BCS, not because of what it can do for you (especially earlier in your career to support you), but also what you can do for your profession and industry.