Skip to content
Martin Cooper AMBCS looks back through the Computer Bulletin archives and details the adverts that capture the mood and spirit of post-war computing.

The 1950s began with the creation of the Polio vaccine, the Great Smog of 1952, the introduction of car seats and the discovery of DNA. In 1954 the first nuclear submarine was launched, Britain sponsored an expedition to find the Abominable Snowman and Roger Banister broke the four-minute mile.

The 1950s were also a defining decade in the world of technology. In 1957 the USSR launched Sputnik and in 1958 Eisenhower established The Advanced Research Project Agency (ARPA). It was established to accelerate the development of technology in the US. The decade also saw the US enter the space race and the invention of fiber optics.

Here are ten adverts taken from the pages of Computer Bulletin which capture the technologies that defined 1950s computing.

It was the talk of the 1958 Olympia Electronic Computer Exhibition: the Creed Model 3000 punched tape machine could read 300 characters per second. It was, the advert trumpeted: ‘Up to TEN TIMES the speed of output punches generally achieve hitherto..’ Elsewhere at the exhibition, Creed & Company Ltd promised to show off teleprinters and various piece of tape preparation machinery.

In 1959, Associated Electrical Industries used doubt as a marketing tool. Would the machine you buy today be up to the job in five years’ time? The AEI 1010 Data Processing System, it promised, most certainly would. A medium-sized installation of the system, the advert read, could handle up to 32 items of peripheral equipment - without any modification to the initial installation. The system boasted that is was transistorized. This boosted compactness and lowered heat dissipation. The machine could carry out 70,000 data processing instructions per second. ‘Parallel programming makes best use of the computer,’ the advert read. ‘Interrupt facilities are provided.’ 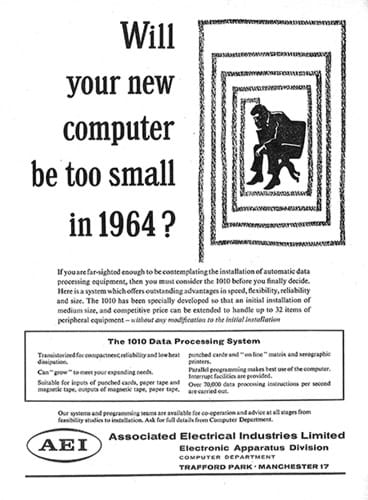 The very first advert in the very first edition of the Computer Bulletin was for IBM’s all new data processing centre that had just opened in London. The centre promised demonstration rooms where customers could see machines like the IBM 650 in action. It could make 78,000 additions per minute or 138,000 logical decisions per minute. The centre invited business people from across the country to visit and see what IBM could do. Consultants, mathematicians and ‘programmers’ were on hand to tackle any kind of problem.

This is a storage drum: the Powers-Samas accounting machine’s memory. It could store a complete accounting routine along with data not needed immediately. The firm, the advert assured readers, told us that Power-Samas was bringing the very latest techniques to the industry’s service. Power-Samas used punched cards and read the punches mechanically. IBM, by contrast, detected the holes using electronics.

The British Tabulating Machine Company Limit was disarmingly honest in this advert from the 1950s. It explains that computers are over-glamourised. Despite modern machines’ advances they still need humans to direct them. And this direction is given through punched cards. The advert reads like a basic introduction to computers for bamboozled businesspeople. The firm even offered short-term residential courses for business people who would like to understand how computers might help their organisation. 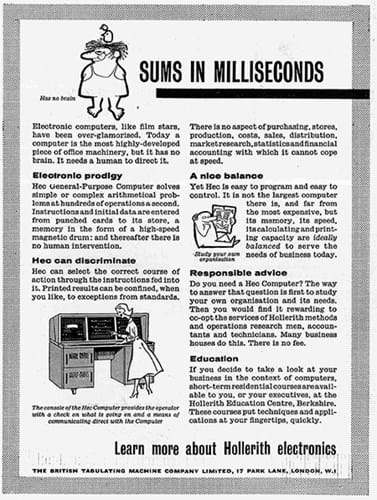 A modern PC can turn its hand to a huge array of different tasks. Back in the 1950s though, a universal machine had something of a different connotation. The English Electric Digital Electronic Universal Computing Engine (DEUCE), for example, was most suited for scientific, statistical and analytical work. The machine’s list of specialisms seems very focused on mathematical and data processing operations. You could buy a DEUCE outright or rent time on a machine. English Electric had two fully staffed computer centres - one in London and one in Stafford. 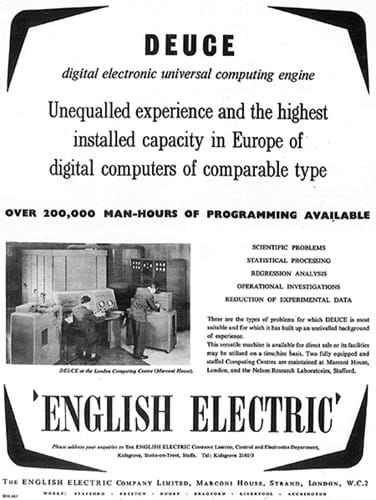 Standard Telephones and Cables Limited branded it’s Zebra a new approach to computer design and, bizarrely, by today’s standards, a medium size machine. Designed in the Netherlands, Zebra is actually an acronym for Zeer Eenvoudige Binaire Reken-Automat. This translates as very easy binary calculating machine. Under its metal skin, the Zebra used over 600 valves and relied on transistors. The machine also used printed circuit boards - very much a cutting edge technology for the time. 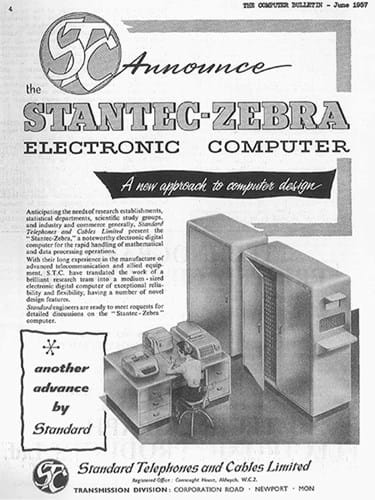 8. Extensible and British too

The EMIDEC 1100 from EMI was the only all-transistor, all British built machine. Buyers included the Air Ministry, Boots, BAE, Kodak, Sainsbury’s and also the Ministry of Labour. What made the 1100 special, so EMI claimed, was that the system was expandable. New components could be added to new units. The machine had around 4K of main memory and 20k of magnetic drum secondary storage. In 1962 EMI Computing Services Division became part of International Computers and Tabulators (ICT). ITC eventually merged with other UK computer companies in 1968 to become International Computers Limited (ICL).

Cheshire, by the looks of it, was transformed by the arrival of its IBM650. Capable of 138,000 logical decisions a second, the machine’s firepower was directed at tasks such as payroll. Each month it worked through 25,000 payments for wages, pensions and salaries. 5,000 PAYE calculations were carried out every hour. Underlining its authority in the field of computing, IBM stated that’s its products were assured by world-wide experience. This experience was founded on 1,200 users and 650 computers being used in business, industry and government. Cheshire’s embracement of computing and mechanisation didn’t result in any redundancies. Rather temporary staff were appointment while the Council transitioned to computerisation.

The Lamson Engineering Company Ltd is probably best known for its Cash Ball system for carrying cash around department stores. It also built pneumatic tube delivery systems. Like the British Tabulating Machine Company Limit above, the Lamson Paragon takes an almost educational tone, seeking to explain what its products are, how they work and their potential benefits. Looking to sell robots, Lamson Paragon Ltd even offer the following definition for a robot: an automaton, with some of the power of man. Going further, the firm offered to visit companies and explain how its robots could help. 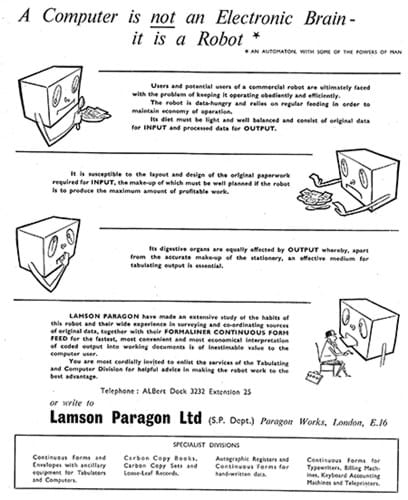