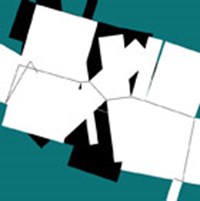 His first ever solo London show opens this month at the Carroll Fletcher Gallery (16 November to 20 December), a long-overdue event celebrating forty-odd years of practice for this NYC-based, German-born painter.

Since 1969 Manfred has been employing the computer for generative processes to create geometric forms. (In the early days the Paris Institute of Meteorology allowed him access to computers and he taught himself programming.)

Our image this month is a computer-controlled inkjet print on canvas based on such cubic shapes typically found in his screen-based versions and in that sense is somewhat like a still.

Its dynamic form and sense of movement is no surprise when we learn that Manfred comes from an action painting and improvisational jazz background. The ‘spontaneous expressions’ of jazz gave way to what he calls a ‘more systematic, geometric form of expression’ using the computer.

Although, Manfred says, ‘all my relations to aesthetical decisions always go back to musical thinking, either active in that I played a musical instrument or theoretical in that I see my art as visual music.’

This change of direction was inspired by the writing of the German philosopher Max Bense, an important figure in the early history of computer arts.

Bense believed that classical humanism and modern technology constructively complemented one another and considered any artefact as an object for aesthetic analysis and mathematical evaluation. He facilitated the first ever exhibition of computer art, the Colloquy on Aesthetics, Stuttgart in 1965. He also inspired Jasia Reichardt to create Cybernetic Serendipity (1968). Manfred’s first computer related exhibition was held in Paris in 1971 and was highly influential as the first solo show of a ‘computer artist’ in a museum. These historic exhibitions marked the beginning of computer arts’ engagement with the wider art world.

At this time (1971) Manfred spoke about using the computer as a partner in his work: ‘Accepting that creative work is an algorithm which represents a human behaviour in a given situation, it is natural to ask: how is such an algorithm built up, and which precise mathematical laws could be extracted for later use in different circumstances?

If one is now curious enough to look for his own aesthetical parameters, he is ready to engage in an interesting line of research.’ I think this early statement still speaks for many artists in this genre who remain interested in and committed to an exploration of sets of instructions as generative tools and methods of working.

Manfred further explored the development of the cube in three dimensions through animated films made during the early 1970s, in collaboration with C.G.M (La Companie Generale de Micromatique), a data storage and preservation company.

Cubic Limit (1973-4) was written in Fortran IV with each frame drawn using a light beam directly from the computer onto 16mm film. Its use of rotating forms to explore concepts of drawing has a parallel with wire frame animations being produced in the UK around this time in Coventry and at the Slade School of Art in London, for example.

Since 1973 Manfred has concentrated on the fracturing of the symmetry of the cube and hypercube; for him the structure of the cube is a system and an alphabet. The disturbance and disintegration of symmetry becomes the basic generator of new constructions and relationships within and between cubes.

The artist’s earlier work was black and white, but a move to colour in 1999 helped him to more clearly describe the spatial relationships of planes. The striking colours are random elements, in service to this.

He uses programs he writes himself (which are specific for each work) in a combination of languages including Fortran, C, and openGL, occasionally Pearl and Javascript. This algorithmically-generated process produces work that could not be realised in any other way.

However in keeping with other pioneers of computational art Manfred believes that the system or logic being used is not what he is interested in showcasing, rather the visual invention resulting from it. In other words the artworks need to stand as independent abstract entities.