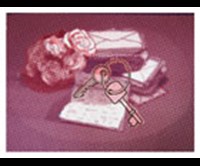 Paul Coldwell, one of the finest printmakers working in the digital medium in Britain today, calls his ‘a layered practice’. Since 1995, Paul has been concerned with the question of how to integrate the computer without relinquishing the knowledge he has gained from twenty-plus years of traditional practice.

Our image this month is from a series which combines the digital with analogue techniques - here, lino printing is employed over an inkjet print, thus creating, in the artist’s own words, a truly ‘personalised surface’.

This series was commissioned last year by the Awagami factory, Japanese producers of specialist papers (including for inkjet) and exhibited at the Bumpodo Gallery, Tokyo.

Still Life with Keys and other artwork made by the artist since 1993, is currently on show at the Stephen Lawrence Gallery, University of Greenwich (until 11 July).

Paul writes, ‘These prints continue my preoccupation with simple objects and the way in which they can open up associations for the viewer. By linking them, I want to suggest the interconnectivity of things and through this suggest the complex set of relationships that we each have with the world.’

Although no people are present they have a figurativeness that reminds us, through their artfully constructed objects, of human presence. Like the prints of the Italian master Giorgio Morandi, an artist he has a particular affection for and the subject of his 2006 exhibition, Giorgio Morandi: Influences on British Art, Paul has built-up a cache of everyday objects and in place of Morandi’s bottles we see coats, briefcases, a chair, an envelope, flowers, books and so on.

Such various everyday household objects create a sense of memory and of time passing. The viewer feels compelled to puzzle out the relationships between them and no doubt each of us has a different answer.

In the view of David Waterworth, Curator at the Stephen Lawrence Gallery, this ‘create[s] a layered and differentiated surface within which histories can be drawn out.’

Over the past decade or so, the computer has revolutionised the art of printmaking. A print no longer needs to be a piece of paper physically pressed against a template.

The difference with working digitally is that the image is printed in a single sweep through a printer whereas in traditional printmaking the image is only complete at the end after all the colours have been printed. As Paul says, ‘With photography there is always the air between the lens and the object, whereas in the scan there is nothing.’

Additionally, the use of a program affords the ability to layer image upon image. What we are left with is a surface that may appear to be flat but one which holds the key to a depth of layers that remain hidden in the computer. As the artist points out, ‘Photoshop is predicated on the concept of layering and the final inkjet print is a flattened image produced from a single printing.’

Paul has been considering how to work within this flattened space and consequently work across the single surface and even how to disrupt this unified surface. Such questions of how to engage meaningfully with the surface within a digital environment and the implications of working with a physical surface compared to that of the digital were researched in the FADE Project 2007-9 at the University of the Arts London, led by Paul as Professor of Fine Art, Chelsea.

Various early problems with digital printmaking of a decade or so ago have been overcome. These included fugitive dye-based inks and a very limited range of substrates. Now inkjet prints use pigment-based light-fast inks and there is an almost infinite range of substrates to choose from including various papers, fabrics, even plastic. The scale can range from the size of a postage stamp through to covering an entire building.

Paul’s prints are composites of imagery, collaged and layered together in grey scale, sizes adjusted on to a grid and manipulated on the computer before being taken into colour. The keys are relief-printed, ‘In order to reassert the surface.’ This is a reference to the traditional art of Japanese woodcuts and contrasts the virtual layering of inkjet with the physical layering of ink through relief.

A notable aspect of Paul’s work is the pattern of small dots covering much of the surface, as seen in our image here. Paul makes use of the half-tone dot - a reference of course to old-fashioned printing press photography and the reproducible image. (Dots are also a feature of Pop Art, most notably Roy Lichtenstein’s work, which the artist admires.)

However in Paul’s case the use of this as a pictorial device gives him ultimate flexibility as each individual dot can be modified in the computer if required, for example enlarged, the colour altered or removed entirely.

Paul says, ‘I intentionally wanted to make these images visually demanding on the viewer, to engage them in the act of looking. The prints operate quite differently when viewed either close up or from a distance, so hopefully they prevent the viewer from forming a fixed reading.’

Paul Coldwell’s prints are subtle, yet engaging and reward deeper contemplation - well worth travelling to Greenwich to see. If you can’t get to the show, the useful, well-illustrated catalogue is particularly recommended and includes insightful essays by the curator Ben Thomas and Christian Rümelin (Keeper of Prints & Drawings of the Cabinet d’arts Graphiques in Geneva).