Skip to content
BCS Internet specialist group member, Anuradha Udunuwara, questions whether the internet of things should really be known as the network of things.

So, when you say IoT, we generally get the picture that the ‘things’ (which could be anything) are connected to the public internet with a public IP address and version 6 of IP (IPv6) should be able to support the number of addresses required for these billions of ‘things’ (could be 20 to 100 billion by 2020, based on different estimations).

While connecting to the internet gives us the ability of remotely controlling, managing and monitoring the ‘things’ easily, it need not necessarily be the case. There could be situations that the scenario is fundamentally thought of as NoT (network of Things) but not IoT. For example, a simple local area network (LAN) is a NoT. Here the network is the ethernet LAN and the ‘things’ could be the hosts (computers / servers), switches, Wi-Fi access points, printers, scanners etc. Connecting to the network could be done in many forms - wired or wireless. Connecting to the ‘internet’ could also be done in many ways.

As long as you are with a public IP on the internet, you are literally open to anybody. Rather than exposing ourselves or our devices (‘things’), why can’t we have a private network or Private NoT (PriNoT) instead of Public NoT (PubNoT) or IoT? - similar to the use of private and public IPs with network address translation (NAT) for hiding the internal devices. This will hide the ‘things’ from the internet.

We can also visualise a network of NoTs (NoNoT). It could be a scenario where the multiple PriNoTs are connected, via a PubNoT, or multiple PriNoTs are connected via another PriNoT. While the PubNoTs could be via the internet, PriNoTs could be connected via a private virtual private network (VPN) implemented using a Layer 2 (ethernet) or Layer 3 (IP) protocols. We can also think of the concepts like The Third Network of MEF being applied to NoTs.

Below figure shows the concepts of IoT / PubNoT, NoT and PriNoT. 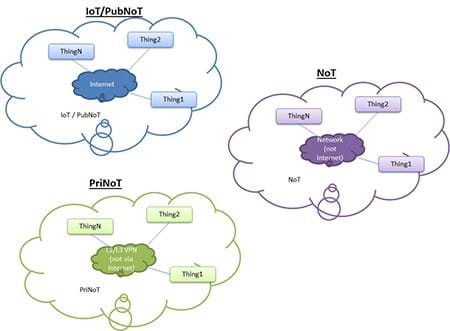 Finally, there will be both PriNoTs and PubNoTs in existence, depending on the type of security, criticality, scalability, expandability, and reliability requirements of the devices (and their respective functions).

Just for your thoughts.

This blog is brought to you by the members of the BCS Internet specialist group and allows you to harness their skills, expertise and knowledge. The internet is ubiquitous and has a major impact on our daily lives, at work, at home on the move. The associated risks and security concerns are real, but the magic and advantages of the internet are significant.

Is the internet down? What do global internet outages reveal about how the internet works and its core vulnerabilities? Craig Barber CITP MCIIS MBCS explains.

You may have heard the term ‘interoperability’ and wondered what it’s all about. Gareth Baxendale CITP FBCS provides a simple explainer.