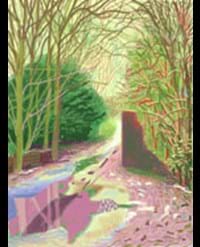 David Hockney: A Bigger Picture continues at the Royal Academy of Arts until 9 April 2012.