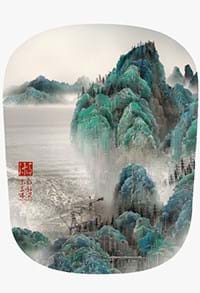 The superb exhibition surveying 12 centuries of Chinese art currently on view at the Victoria & Albert Museum (to 19 Jan), showcases a culture that values continuity, tradition and repetition. Also evident is the strong history within Chinese art of honouring the artistic achievements of the preceding generation through the deliberate mimicking of previous styles of painting.

The Shanghai-based Yang Yongliang, our featured artist this month, does exactly this but gives a contemporary interpretation to his traditionally-inspired art, utilising new technology and updated imagery. A fusion of the old with new modalities from the West creates something entirely new in art.

Yang Yongliang cleverly recreates the main principles of Chinese blue-green Shan shui (‘mountain and water’) paintings which first arose in the fifth century using mineral dyes for the vibrant hues. Shan shui works are painted and designed according to elemental theory with the five elements representing various parts of the natural world.

Yang uses a camera and computer to manipulate his imagery of urban life thus subtly subverting traditional painting. In place of the historic natural landscapes filled with rock formations and craggy trees - perhaps even a contemplative scholar - in Yang’s work we see construction sites, large cranes, fly-overs and the assorted detritus of the rapidly growing, increasingly urbanised country that is contemporary China.

The dreamlike Shan shui seamlessly morphs into shocking modernity. In our image this month, electricity pylons and towers dot the landscape like trees, skyscrapers merge into mountains and cranes dominate the skyline. Like classic Chinese painting, it appears abstract at a distance and highly realistic up close.

One of the principles of Shan shui is to emphasise the contradictions between the ephemeral and solid, dynamic energy and calm, empty and crowded space, attractive and repulsive elements thus making the whole poetically harmonious. Yang’s image is arranged to fit into the traditional Chinese composition of a fan shape (a popular format seen throughout history) and this, with the inverted imagery, further emphasizes the artist’s modern interpretation.

Yang adds details from modern cities which have been described as ‘blots on the landscape’. However the overall impression retains the attractive aesthetic inherent in Shan shui. Thus he successfully achieves a perfect balance between fragility and danger, beauty and cruelty.

Recently Yang’s work has been collected by the British Museum, which has experienced a fruitful cooperation with China since 2005 with the signing of three memoranda of understanding between itself and three Chinese museums (two in Beijing and one in Shanghai). This led to the BM sending four exhibitions to China as well as two exhibitions in London featuring distinguished Chinese loans (including the terracotta figures in 2007-8) and the acquisition of two digital prints by Yang Yongliang.

Ian Stuart from the British Museum writes, ‘Yang invites reflection on whether today’s China embodies a smooth continuum (or a rupture) between past and present cultural traditions. It also prompts deliberation on whether it is possible (or impossible) for rural and urban spaces to coexist in a country that is undergoing modernisation at such a breathtaking pace.’

Coming from a traditional fine arts background, having studied from an early age traditional ink and wash / watercolour painting followed by calligraphy and decoration and design at Hong Kong University and Shanghai Fine Art Institute, puts Yang in the perfect position to meld the modern with the historic. In 2005 Yang began creating digitally manipulated photographic prints that, as Ian Stuart says, ‘are so painterly they hover perpetually between the two media, not fully belonging to either.’

Stuart points out that this series of work resonates with the lyrical, atmospheric landscapes produced during the Southern Song dynasty (1127-1279) - works that expressed with spiritual intensity a contemplative bond between man and nature. Yong’s inkjet printing in subtle tones of black and grey mimics the misty texture and gradations of tone which characterise Southern Song ink painting where fine washes and a variety of brushstrokes were used to describe natural details.

For more than two millennia, ink has been the principal medium of painting and calligraphy in China. Since the early 20th century, however, the primacy of the ‘ink art’ tradition has increasingly been challenged by new media and practices introduced from the West.

Yong is the foremost amongst such artists and his inspiring work at once delicate and dangerous, tells us something of what it is to live through such rapid modernisation and shift from an agrarian to urban economy. Through the symbolic medium of landscape, using digitally-applied ink, he successfully manages to address the very heart of what is means to be human in the 21st century.

A happy New Year to all our readers.

The definition of digital forensics is the process of uncovering and interpreting electronic data for use in a court of law, writes Shahrzad Zargari, Senior Lecturer and Course Leader in Cybersecurity with Forensics.

How to quit your job