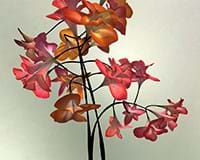 Collection of the University of Dundee.

This month we investigate an interesting commission from the University of Dundee Museum Services who have been working on a £100,000 project funded by the Art Fund, to explore the influence of Sir D’Arcy Wentworth Thompson in the visual arts.

Because of the interdisciplinary nature of the Dundee Collections and the Thompson connection, this grant funding has uniquely facilitated the creation of an art work itself with an interdisciplinary concept at its heart.

Designer, programmer and artist Daniel Brown (and son of Paul Brown, previously featured in this column) has been commissioned to produce On Growth and Form, a moving image work which uses computer code to generate hyper-realistic, never repeating blooms that, like time-lapse documentary photography, explode hypnotically into patterns before the viewer’s eyes.

Sir D’Arcy Wentworth Thompson (1860-1948) was a scholar, scientist, naturalist, classicist, mathematician and philosopher who laid the foundations for the science of biomathematics. He was the first Professor of Biology at Dundee and founder of the University’s Zoology Museum.

His ideas and clarity of explanation also had a great influence on art and design, the repercussions of which continue today. Of greatest relevance for the subsequent development of British computer arts was artist Richard Hamilton’s involvement with Thompson’s ideas when he was a teacher at King’s College, Newcastle, (then part of Durham University) alongside Victor Pasmore.

Pasmore and Hamilton modelled their groundbreaking teachings in the mid-1950s on the Basic Design course of the Bauhaus. This emphasised technique and the process of artistic creation and was inspired by Thompson’s morphological studies. Incidentally, Hamilton’s pedagogic innovations can be traced in a direct line in British art schools from tutor to pupil, to the year 1974 with the first artist able to access computing technology in an art school - Stephen Scrivener at the Slade.

In 1917 Thompson published On Growth and Form, which looked at the way things grow and the shapes they take. Hamilton said the book ‘opened my eyes to the idea that the world is as it is because it must follow certain mathematical principles. He describes phenomena, like the spirals on a cauliflower, so that you see it has to be this way, because time and the activity of growth are related.’

So inspired, Hamilton held an exhibition titled On Growth and Form (1951) which illustrated aspects of the structure of growth and natural forms, from atomic particles to X-rays, it also featured projection of images onto the walls (unusual at that time). This show was an early example in the British art world of an attempt to bring the arts and sciences together with the aim of demonstrating what they might have in common.

Thompson’s work has been an important influence on Daniel Brown too, who quotes Thompson from On Growth and Form, ‘The harmony of the world is made manifest in Form and Number and the heart and soul and all the poetry of Natural Philosophy are embodied in the concept of mathematical beauty.’ Daniel writes, ‘For me mathematics is the language of nature. In this book the scientist uses mathematics and 3D-modeling to investigate the theory of evolution and the relationships between different species.’

Daniel began working in new media as an apprentice at sixteen and later studied Interactive Arts under Roy Ascott at Newport, University of Wales (Ascott is an important node in the link between Richard Hamilton and Stephen Scrivener).

Daniel has had a stellar career winning the great accolade London Design Museum’s Designer of the Year in 2004 and since then he has been selected for The Observer’s ‘80 people who will define the next 10 years’, Design Week’s ‘Hottest 50 Designers’, represented the best of British design with the British Council and as one of the exhibitors in the Design Council’s Great Expectations show, whilst working with such illustrious names as Selfridge’s, Sony, the Wellcome Foundation and Saatchi & Saatchi advertising.

The artist’s Play - Create project (an online open access work where he posts projects and work-in-progress that can be played and interacted with by the public) demonstrates his ongoing interest in interactivity and generative artworks.

He first began the series On Growth and Form in 1999, titled in homage to Thompson’s book. Readers may recall the three story high version shown at the Decode exhibition which formed a frontispiece to the entrance of the show at the Victoria & Albert Museum in 2009 (and subsequently acquired by the museum).

Now Daniel has created a new generation of the floral series using shapes and textures taken from and inspired by exhibits in the Zoological museum. He has also added a ‘virtual’ camera to pan around the blooms as they grow. Our image this month shows just one still from the never-repeating graphics and uses the artist’s own real-time 3D flowers engine, code named Darwin (phase 2), utilising Open GL/DirectX systems.

The work was premiered on 23 November last year as part of Dundee’s Christmas Light Night and featured in the exhibition Mathematical Beauty: The Science & Art of Form at the Gateway Galleries, University of St Andrews, until 2 March 2013.

The grant comes from the Art Fund’s RENEW scheme intended to facilitate the establishment of creative new directions for museums’ collecting strategies and will allow the University to acquire 20th-century artworks and, as Curator Matthew Jarron writes ‘we’re keen to get today’s artists using D’Arcy Thompson’s surviving collection in our Zoology Museum as a further source of inspiration.’ They are certainly off to a great start with this one.