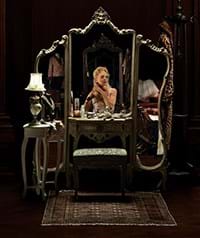 The 55th International Art Exhibition, commonly known as the Venice Biennale, takes as its title this year The Encyclopaedic Palace - a theme full of the promise of universal inclusion.

All the more so when we learn that the curator Massimiliano Gioni’s inspiration was the work of Italo-American self-taught artist Marino Auriti who, in the 1950s, conceived of an imaginary museum that was meant to house all worldly knowledge, bringing together the greatest discoveries of the human race, from the wheel to the satellite.

Although his museum as a constructed building never came to fruition, we could say that Auriti’s ideas did, in the invention of the internet & the world wide web. (Sadly, Auriti did not live to see this.)

His large wooden model for his proposed Encyclopaedic Palace was exhibited in the Biennale’s main exhibition hall and contains quotes offering good advice written around the outside of the building (‘Watch that you don’t become greedy with your profits’ is my favourite, seeming particularly apt in an era of failed banks).

Given this theme therefore, I couldn’t help but feel it was rather a missed opportunity that the curator chose not to confront more boldly the reality of contemporary life by including art that engages with the ICT age, addresses the fact that large amounts of visual imagery reaches us mediated through screens, nor be informed by the increasingly virtual experience of our lives today - lived online, through social networking and so on.

I found only one piece with reference to this (and it was a historic one), a video montage of pioneering early computer-generated film clips by Stan VanDerBeek, which sadly missed out being properly contextualised.

However, elsewhere in the National Pavilions (venues curated individually by the 88 participating countries themselves), things improved with the Argentine artist Nicola Costantino creating an installation that used digital video to speak of a nation’s continuing attempts to make sense of a turbulent 20thC political history. At the heart of this work is the controversial and emotionally-charged character of Eva Perón, the First Lady of Argentina from 1946 until her death in 1952.

The title ‘Rapsodia inconclusa [Unfinished Rhapsody]’ points to the fact that the representation of myths surrounding this powerful woman could never be concluded. The artist explains, ‘I also had a repository of childhood memories - shared with all other Argentineans - about her funeral, her speeches, her resignation as political candidate, all of which are very emotional. Overlapping with those images were also sequences of the inevitable family discussions between Peronists and anti-Peronists.’

In the exhibition the space represented is Eva’s house, where she is seen performing daily tasks at different moments of her life. There are various depictions of Eva’s living together in distinct time layers, though they appear here simultaneously.

‘Eva el espejo [Eva the Mirror]’, a detail of which is shown here, is the animated reflection of an intimate scene - Eva the actress getting ready to go on stage. We walk into her furnished bedroom, see her in the dressing-table mirror and, where our own reflection would normally be, we watch as she repeatedly makes-up her hair style and then combs it out, over and over again. A preparation for an appearance that never arrives.

Writes Nicola, ‘The room we’re in is empty, but the reflections on the mirrors are still reliving past scenes, as if they had an inexhaustible memory. I’m always speaking of an Eva that death can’t make disappear. I preferred that dreamlike superimposition over any attempt to exhaust such a multifaceted character in a single representation.’

Like the American artist Cindy Sherman, Nicola Costantino personally takes on the persona of her subject, by dressing-up as and inhabiting the character of Eva. The artist explains, ‘Beyond the public figure, perhaps too worn out by now, I tried to recover the private figure. Transforming, dressing as Eva, is also a way of approaching her, incarnating her, based on her attire.’

Another part of the exhibition called ‘Eva la fuerza [Eva the Force]’ consisted of a sculpture of an iron dress, inspired by the myth that Eva was propped up by a metal structure when she was gravely ill during her last public appearance in the inauguration of her husband’s (President Juan Perón) second presidential term. This kinetic, machine-like object crashes and shakes incessantly, as though possessed, the artist says, ‘by Eva’s despair as she’s faced with a tragic destiny that even all her strength and determination can no longer avoid.’

With a background in sculpture this Buenos Aires-based artist constantly seeks to incorporate new materials and processes in her practice, for example the study of mechanical engineering and taxidermy.

‘Unfinished Rhapsody’ addresses the challenge of how to represent such a potent myth that has been constrained by historic paradigms from a country that has been subject to military coups, political instability and periodic economic crisis. Through its charged subject matter of the person of Eva Perón, this work also confronts issues of the female body and representations of femininity.

Several years after her untimely death from cancer, Eva’s embalmed body disappeared in the coup that forced her husband into exile. Some believed its removal from Argentina was part of a systematic attempt to erase Peronism from the country, as Eva was the movement’s most powerful symbol - advocate of women’s suffrage, championing labour rights and welfare reforms. Now she is remembered as ‘Saint Evita’ and is part of international popular culture, through the musical and Hollywood film.

Without making any moral pronouncements, Nicola Costantino encourages us to re-consider one the most emblematic figures in 20th century South American history, within Argentina’s own Pavilion and to my mind this is the Venice Biennale at its very best.

The Biennale runs until 24 November 2013 in various venues throughout the city of Venice.

The tech sector bounced back from the pandemic bigger and better than before with a strong demand for skilled staff, according to figures released by the professional body for information technology. BCS, The Chartered Institute for IT, analysed figures from various sources, including the Office for National Statistics and job sites.

I am excited to work with leading technologists as part of our mission in ‘Making IT good for society’.

How being PSD2 compliant can set you ahead of competitors