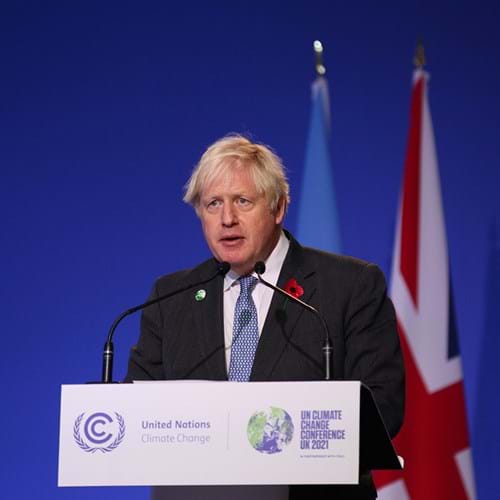 Over a hundred world leaders attended the first two days of the COP26 summit, making a series of announcements to address the climate emergency. BCS Senior Media Relations Officer Claire Penketh looks at what the pledges mean for tech.

Day one of COP26 in Glasgow was about the stark future we face if we ignore the climate emergency. UN Secretary-General António Guterres summed it up when, at the opening ceremony, he said: "Our addiction to fossil fuels is pushing humanity to the brink. We face a stark choice: Either we stop it - or it stops us."

It was a day to pause and reflect as government leaders, activists and indigenous leaders spoke about the dire environmental state of our world. What also became apparent was the division globally, between the haves and the haves not. Those in the poorest parts of the world, who do the least polluting, and have the least access to new technology to mitigate the effects of climate change, appealed to their more prosperous and technologically advanced counterparts to act now, and to keep their promises.

There was very little specifically tech news announced on the first day of the conference - other than COP26 President and UK Prime Minister Boris Johnson mentioning the word 'technology' in his speech five times. He was using the term in its broadest sense. For instance: "We know what the scientists tell us ... It's one minute to midnight on that doomsday clock, and we need to act now. We have the technology to deactivate that ticking doomsday device."

There was also: "We have the technology; we can find the finance - and we must - and the question for all of us today is whether we have the will."

Day 2 did, however, see a flurry of activity, summed up in an official United Nations Framework Convention on Climate Change (UNFCCC) statement as "...a wide range of announcements focused on signalling a clear shift from ambition to immediate action. Countries have made unprecedented commitments to protect forests, reduce methane emissions and accelerate green technology."

Over 35 world leaders signed up to the Glasgow Breakthrough Agenda. It aims to bring countries and businesses together to dramatically accelerate the development and deployment of clean technologies at scale.

The idea is to make clean technologies the most affordable, accessible, and attractive choice globally for everyone in the most polluting sectors by 2030. It's hoped the developing world will get access to the tools and innovation needed to transition to net zero.

Tech will, of course, play its part in measuring, modelling outcomes and providing the innovation and IT infrastructure that is needed. Plus, this is where the gathering of data comes into its own.

The countries that signed up to the Glasgow Breakthrough Agenda have pledged to discuss global progress every year in each sector starting in 2022. Those talks will be informed by annual reports led by the International Energy Agency, collaborating with the International Renewable Energy Agency and the UN High-Level Champions.

It's not just about the governments

The importance of big business, philanthropists, NGOs, and banks playing their part in financing action on climate change was a recurring theme in the speeches of the US President, Joe Biden, the UK PM, and other world leaders.

There were several announcements on this front, including:

Commentators say it does feel as if most world leaders have woken up to the imminent threat of climate change and are more prepared to act. However, there's still cynicism about how the necessary changes will be paid for, implemented, enforced and policed on the ground.

According to Carbon Brief, America is still the most polluting country globally when it comes to the cumulative CO2 emissions from fossil fuels, land use, and forestry. China, Russia, and Brazil, respectively, are the next in line.

Neither Xi Jinping of China, nor Vladimir Putin of Russia, were at COP26. There also remain questions around whether the promises made by the Brazilian President, Jair Bolsonaro to protect the forests from logging, are little more than lip service.

Most leaders left in their private jets at the end of the second day of COP26, much to the disgust of green activists who said that alone showed little respect for the environment.

Hundreds of protesters converged on Glasgow. One Extinction Rebellion campaigner, Luca Trivellone, said: "We are expecting emissions to rise instead of net zero by 2030. We are never going to get there."

The summit continues until the end of next week, and the BCS team will be in Glasgow soon, finding out about further developments for our tech community.

What’s next in the data centres’ sustainability journey?