How a CDIO had to stop, to carry on 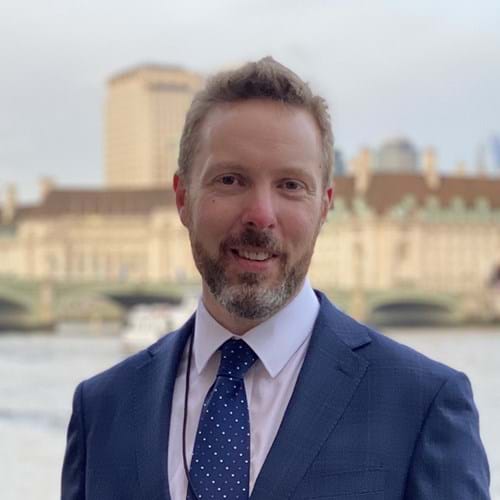 When coronavirus hit and the call to work from home came in March 2020, Toby Avery CDIO of Surrey and Borders Partnership NHS Foundation Trust, knew the only way to move forward, was to stop everything. Johanna Hamilton AMBCS reports.

‘We can sit back and take all the credit in the world – but sometimes you're just lucky.’ Begins Toby Avery on asking about the impact of COVID-19 on his role. ‘I have had a lot of good fortune in the last year or two in terms of the talent we've had in our organisation - both our substantial staff and consultancy staff.’

Tell me about what had to go, when COVID arrived?

‘My deputy, Mike Cavaye, came to me with a list of five things we need to do and said we should stop everything else - 50 or so other projects. And that was tough. But we had to prioritise things like getting enough kit to people, making sure remote access was working so people could work effectively from home in larger numbers than we had before.

'That’s basic stuff we were already doing it, but not to the scale we now needed. Some of the resource and contracts we’d already commissioned we had to pause so we could spin the resource we had available in a different way. So suddenly you've got a business analyst delivering laptops or something.

‘Some staff, carried on doing the day job throughout because their day job was critical. Others had to be flexible and willing to adapt. I was out delivering laptops myself, in people’s homes in London, in other counties or wherever people were - because that's what needed to be done. That willingness to adapt and do something different - not just for a day or a week - but actually for months, was key to our successful pivoting.’

Tell me about how your team pivoted during COVID?

‘We were fortunate, that we'd already deployed Microsoft Teams - but not everyone was using it. We were heading into what we expected to be an 18-month adoption programme for Microsoft Teams. We had a number of departments and individuals that were using it quite a lot, but the wider organisation absolutely wasn't.

'Originally, we looked at a long-term programme of adoption over the coming years - but with COVID that changed to a few weeks. We had to help people and hand hold people on that journey and at pace. In order to do that we decided to knock up some really quick video tutorials.

‘Even with scaling and video tutorials, the call volume to our service desk went 50% above normal for April last year. So suddenly we're having to respond to 50% more calls than we normally do. That's tailed off a bit, it's down to about 30% more per month than pre-COVID, but we're still having to help people with home wi-fi and provide offerings in new ways to help people adopt the tools at a pace. In a sense it’s been quite exciting.’

How did you deal with the sudden WFH workforce?

‘We created a bespoke intranet site called the toolkit. It was created to share training videos, risk stuff. “What do you need to think about now that you didn’t have to think about yesterday?” It's more about reminding people what good practice looks like. In the office, they might have printed a bunch of stuff to look at whereas now actually they're just looking at it on their laptop screen or monitor.

‘The bigger problem was we had people working on ironing boards because they didn't have a desk at home. They were working from their dining table sitting on a hard-wooden chair all day. So very quickly we told people to go to the office and pick up a chair or a monitor.

'Whatever they needed to work. We didn't have enough laptops so we said people could take their desktop's home. We enabled some capability for them to be able to plug their desktop into their home router and work like that. It was about being really agile, really flexible, really adaptable to make sure things could keep working.’

So, what does good look like in digital health and how important is the role of the CIO to get you there?

‘I think good looks different to every person in every organisation. There's no right answer to that question, in my opinion. I think it will look different depending on whether you're the COO, the medical director or the digital director. We're all going to have a slightly different view of what good looks like. At the very basic technology level if we haven't got a good network, good wi-fi, regularly refreshed kit that enables people to log in relatively rapidly, those basics.

'If those aren't right you can't say that you're doing well, in my opinion. If a doctor is taking 10 minutes to log in to a device because it's so old or so slow or so clogged up or whatever, we're failing somewhere along the line. You’ve got to get the basics right first? How can you start planning and implementing AI/machine learning etc if you can’t even get onto wi-fi?

‘So, how are we building in new resources, new skills, competencies, things like: user research, design principles, design skills that we haven't historically had in the NHS? We're building design teams; I think we've got four now that we've built in our organisation to support moving things forward and it's just completely revolutionising how we deliver our core patient record and technology into the organisation. So, you've got to be looking forward and to be building the competencies that you need for the future.’

How do you handle training within your team?

‘I'm a big fan of continued professional development so we've had a number of people through the NHS digital academy, Masters degrees in leadership and all sorts of other opportunities right down to base technical skills and competencies.

‘Currently we’re working on developing a much more robust professionalisation and development path for digital specifically. So as part of that we signed up as an organisational member with BCS. We now have nearly 60 people as members out of a department of about 90.

'We've got a number of people who've gone through RITTech. I've done my FBCS. A few of us have done our Chime CIO certification. I think setting standards is a really important part of our staff development and enables us all to plan an effective and sensible career path in digital.’

Tell me about the importance of professionalism and networking?

‘I tend to go to things that are directly digital health related and typically more NHS centric, just because that's where I'm going to connect more often with the people that are thought leaders in the space that I'm currently working in.

'So, I haven't really benefited a lot from BCS but that's more just because I can only go to so many things. Networking as a generic concept is absolutely critical. It's trying to work out the right places to tap into and given limited time you've got to make your choices about where you go.’

How important is leading from the front and being a mentor for your team?

‘Leading from the front. I'm already an executive level director. I’ve achieved my FBCS since being at this level. It’s probably not going to help me get my next job, but what it does do is to validate that I'm operating at a particular level.

'That’s important to me personally, for my confidence and it's important amongst my peers and for my organisation to recognise that they've got someone in that role who is validated at a particular level.

‘It’s about leading from the front and telling my team “I’m not just talking about professionalism. I’m doing it myself.” That's why I did the Chime CIO and that's why I've currently got my application in for FEDIP as well. I'm a big fan of the idea of servant leadership; that it's not just about me charging ahead, it's actually all of us going together. Leadership is about empowering others to lead.

‘You give me the answers, I don't have the answers. Often people are looking to you for the answers because you've got the bigger job title. For me the job is about unleashing those people and helping them to really rise. That's the mentoring piece, to help the individuals that you've employed to recognise and use their talents to come up with the ideas and to work together as a team to do that. So, it's mentoring them into this place where actually everyone becomes a leader and we're all part of a big team.’

How do you feel both the NHS and BCS raise professionalism?

‘The NHS Digital Academy is a fascinating thing, I was on the very first cohort. There were a real mix of people like me that had come up through IT, mostly in the NHS - some of the modules we'd all done for donkey's years. While we weren’t necessarily learning something new, what we were doing was networking and connecting and learning from each other, which is really powerful.

‘There were also things that actually I hadn't touched on before like health economics which I found fascinating. Some clinicians on the course were completely the opposite and had never done any programme management before. So, it's a really good incubator for thought and ideas.

'It filled gaps that perhaps people had but everyone was coming from a different place so the gaps that were filled would have been different for everyone. It was and continues to be an incubator for like-minded people who want to challenge and push each other forward.’

What advice would you give to other digital leaders?

‘Team is everything. We can't do it by ourselves. If you're going to be in leadership, it doesn't matter what area of leadership you're talking about, we do it with a team don't we? If I sit there thinking that I know all the answers I'm not going to get very far.

'If I recognise that my team probably has all the answers somewhere in it and I help my team to be able to unearth those answers and articulate those answers then we're on to a winner. So, we have a big philosophy about what we call fusion teams. So, bringing different diverse skill sets and capabilities together to make magic happen.

'As a leader you've got to unearth those people, find those competencies, find those skills, bring them together and help individuals to create magic as a team. That means being willing to be told you're wrong and to recognise that someone else has got a better idea. In short, sometimes, you've got to be quite humble.

‘The NHS particularly doesn't need any more heroes. What we need is more teams with diverse sets of skills, competencies and experiences to come together. That’s how we do great stuff.’

Creating a ‘clinical satnav’ for doctors will save lives, say digital health experts