Skip to content
Captured data can help shine new light on illness. Sir Harry Burns warned a Glasgow gathering of informatics professionals that they might need to look elsewhere for answers about how to really change lives and society.

Sir Harry is Professor of Global Public Health at the University of Strathclyde and previously Scotland’s Chief Medical Officer. Speaking to a busy conference at the Strathclyde Technology Innovation Centre in Glasgow, Sir Harry presented his take on the future of digital health - and also issued some stark warnings to the informatics community.

Given the conference’s focus was health informatics, he began his presentation by posing a seemingly controversial question. He asked whether the medical profession was, ironically, more focused on measuring sickness rather than health. Doctors, he asserted, tend to think of health as an absence of illness.

To illustrate his point, Sir Harry pointed to the United Nation’s definition of health: ‘Health is a state of complete physical, mental, and social wellbeing and not merely the absence of disease or infirmity.’ Doctors, he explained, tended to focus on the second part of the definition - the part that talks about absences. ‘And,’ he said, ‘it’s my belief that the informatics profession tends to take that lead from the medical paradigm.’

‘I disagree with that definition in another way too,’ he said. ‘That’s because it describes health as a state. How many of us are in a state of complete wellbeing? The problem is, it defines health in terms of a binary relationship. You’re either healthy or you’re not.’

The reality is, he said, people tend to drift in and out of wellbeing many times a day. This means if we’re serious about health informatics we need a better understanding of what wellbeing is, what constitutes it and ultimately how to measure it.

To further illustrate the need for a better and clearer understanding of what constitutes wellbeing, Sir Harry explored a commonly held myth about Scottish health. People, he said, generally believe Scots are unhealthy because they smoke and drink too much and eat the wrong foods. If they adopted healthy habits, so the fiction goes, they would be healthier. He, however, sees a different story.

For decades, Scottish health and life expectancy were on a par with many of its European counterparts. It is only in the last few decades that these countries have managed to grow their average life expectancies, whereas Scotland’s remained constant. And it is among the richest where this increase in life expectancy is most profound. ‘If the poorest people’s life expectancy grew at the same rate as the richest, we’d be at the European [average] level now.’ The problem is, he says, a complex socio economic one - not a binary relationship.

Digging further into the complexity he drew another example: ’In the 1960s, Finnish men had an extremely high rate of heart attacks. And the Finnish Government decided to do something about it.’

The conventional wisdom was, he said, it’s all due to fatty foods. ‘So, they took the subsidies away from dairy farmers to discourage them from producing milk and butter and cream. They gave them the subsidies back if they switched to growing fruit and vegetables, which they gave away in schools.’

‘It’s the same,’ he said. ‘We’ve seen the same decline over the same period. They took radical action. We did absolutely hee-haw.’

The problem, Sir Harry explained, is the notion that ‘we did this and that happened’. The notion of association rather than causation. What actually happened during the time period, he explained, was a huge decline in smoking across all of Europe and, critically, there was an uptake in the use of statins.

‘Just collecting data,’ he warned the gathered informatics professionals, ‘doesn’t tell you much about causal relationships. You need to tease things apart... there are all sorts of fallacies, poor interpretation and reverse causalities.’ Yet, he warned, we are often persuaded and seduced by them.

Digging deeper for the truth

Expanding his point about association rather than causation, Sir Harry pointed to a research project carried out by Alistair Leyland of Glasgow University. Leyland, he said, set out to understand what was really causing lots of deaths in Scotland - ‘Is it heart attacks and cancer, or is it something else? He looked at the ages in a population where inequality is widest and death rates are highest.’

Teenagers and young workers see one of the highest instances of death. But, he explained, it’s not due to heart attack and cancer. ‘You can prove that by looking at individual causes of death. Heart disease contributes later in life. So what’s the cause? It’s drugs, it’s alcohol, suicide, violence and accidents. That’s what’s forming the bulk of deaths in that age group. We’re not going to fix that by reducing the saturated fat in somebody’s diet. This is socioeconomic.’ Finishing the point, Burns said: ‘It’s about how our society works. And that’s messy. If you want informatics about that where are you going to get it? Where are the numbers going to come from? It’s a complex system that’s causing this huge inequality.’

A different way of thinking

So, rather than thinking about what causes illness, can we think more about how society causes wellness? It seems we can, and we should according to Sir Harry. The term salutogenesis describes an approach that focuses on factors that support health and wellbeing, rather than concentrating on what causes diseases (pathogenesis). How can we use informatics to measure wellbeing?

What’s fascinating, Sir Harry said, is that the factors that promote wellbeing are often laid down in our childhoods. Children who grow up feeling a sense of purpose and of meaning in their lives, children who want to engage with society - they have a feeling of control in their lives. These children grow ultimately into healthier adults - adults who are less likely to rely on drugs and alcohol.

‘Can we use informatics to get a handle on these factors? If we can’t we’re going to be caught in the sickness paradigm’ he asserted. People, he said, need to feel in control of their lives and we need to be able to measure that. ‘Can we think about how we measure compassion in society - can we get an app for that?’

Elsewhere at the 2016 Health Informatics Conference, Joanne Boyle of the Digital Health & Care Institute (DHI) discussed the wellbeing challenges Scotland faces and also the technologies that are being developed to help meet these opportunities.

DHI is part of the Scottish Funding Council’s Innovation Centre Programme. It brings together organisations and people from across academia, the tech industry, health and social care and design. The aim is to develop and support new ideas that will - ultimately - help the people of Scotland to live healthier lives. DHI has worked on many projects across Scotland:

RESbosk - A innovative system that reads oxygen levels in the blood through facial recognition. The system is very quick in operation and uses Microsoft’s Kinect camera.

Moletest - Moletest is an app that can quickly access skin pigment lesions (moles) and work out whether they are malignant. The system can be used by GPs so saving the need for onward referral. This is important because around 97 per cent of referrals are unnecessary. The system is app-based and uses an iPad or iPhone’s camera and algorithmic processing to calculate the risk a mole poses.

Pillcam - Featuring a tiny camera and a flashing LED light, Pillcam allows physicians to see inside a patient’s gut. It is an alternative to a less pleasant traditional procedure. The pill is swallowed and, as it travels, it sends its captured images to a receiver worn by the patient in a belt. 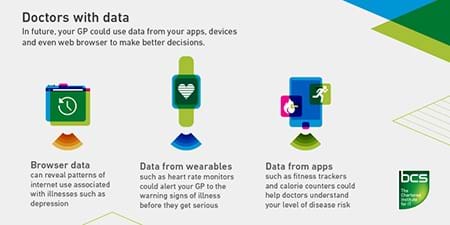 Creating a ‘clinical satnav’ for doctors will save lives, say digital health experts

Providing better computerised advice for routine medical decisions will save lives and help to solve problems like over-prescription of antibiotics, according to a new report by the professional body for IT.

IoT technologies and connectivity powering protection in the healthcare sector

Pressure on healthcare systems is ever mounting – increasingly so, since COVID-19, writes Paul Craig, Head of IoT, at OV. Outdated and slow technology only makes an already intense job more difficult.

From chance discussion over a coffee to a fully live and living post-graduate course, Professor Wendy Dearing celebrates a new addition to Wales’ health and care.

Hao Zhang is CEO of Oxford Cancer Biomarkers, who has been developing a machine learning system to provide clinical decision support for colorectal cancer treating clinicians. He talks to Brian Runciman MBCS about the programme, big data, AI ethics, privacy issues and more.