Skip to content
Richard Davies, Managing Director, Leading Edge Forum, discusses how disruptive forces like the web, social and big data are changing the way in which businesses organise themselves, operate and how they make money. 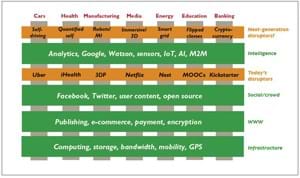 Based in the City of London, Lanware is a specialist Managed Service Provider to the mid-market Financial Services sector. Here, Henry Duncombe, Managing Director explains the product behind the success.