Retraining for a career in IT 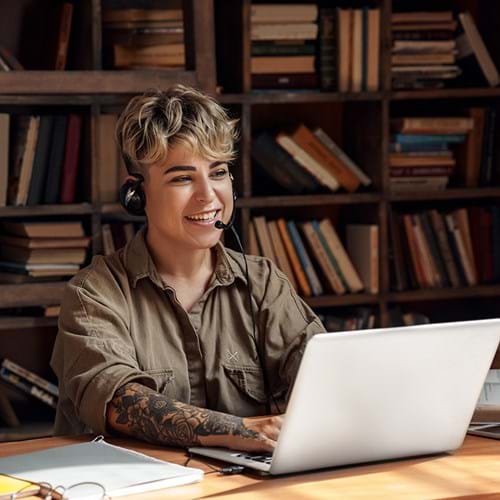 BCS Student Member Maddy McMurray talks to Blair Melsom MBCS about imposter syndrome, inclusivity and what it’s like to retrain for a career in the IT industry.

Maddy McMurray is a student with the Open University, studying towards a BSC Hons in Computing and IT - with a focus on software development. Here, they explain their route into the industry from another career and their experience along the way.

Tell us about yourself

I'm still really new to IT. I only started studying in 2019 and I'm not 100% sure of where my IT career will take me, but I know that I am passionate about accessibility and diversity in tech. Everyone should be able to access tech, regardless of accessibility needs or where they stand in the social hierarchy, they should be able to see themselves in the tech field.

Outside of tech, I am non-binary, and I've been married to my wife for nearly ten years. I enjoy kayaking, board games and escape rooms - my escape room team actually currently has a 100% success rate, so I'm very proud of that! I'm Australian, I moved to the UK in 2011.

You've mentioned the emphasis on accessibility and representation in IT. Is that what has inspired you to make that journey into an IT career path?

Yes, actually. I suffer from a condition called Idiopathic Intracranial Hypertension. I was diagnosed with this back in 2016 and at the time I was working for a company in London in a finance operations role. I was very happy in my role but I became so ill with chronic headaches that I could no longer work.

Eventually, I was made redundant and turned towards tech because a) I was passionate about it growing up as a teenager, and b) because I wanted to make sure that even if I could only work a handful of hours a week if I was ill in the future, that the work should be worth doing, should have an impact in the world and should change things for the better.

How did you decide on the route to take in?

I'm still figuring my way a little bit, but I started out with the Open University (OU). I know that a lot of people go through coding boot camps and the self-teaching route when they're retraining, but I found that, where I was having to manage my illness, I wanted to be able to go into a more structured learning environment. So that's why the OU worked really well for me: it is fantastic. It’s flexible and so welcoming, especially to people with disabilities and with different accessibility requirements.

I started my computing and IT bachelor’s in April 2019 and from there I've been able to explore where I want to go in the future. I also joined BCS as a student member through the OU and took part in the BCS Women's Lovelace Colloquium in 2020.

Have you found there to be any barriers on your IT career journey so far?

A big barrier for me right at the start - and what nearly made me throw in the towel straight away - was my first ever in-person class with the OU. When I walked into the classroom, I was the only AFAB (assigned female at birth) person in the room. Everyone that I spoke to was already experienced in tech and seemed to be getting the degree as a formality. It was terrifying; I very nearly walked back out the door and quit because I just felt so unwelcome and out of my depth. Luckily, my tutor for that course was a lovely woman called Kate Sim; she was the one that inspired me to keep going with it because I saw someone that was like me and I thought, ‘OK, I can do this.’

One thing I’ve found as I've got further along is some gatekeeping due to my age. I'm not very old - I'm 30 - but when I've been looking into internships or jobs to get experience, so many companies are not receptive to older interns or older applicants for roles.

So many [placement / hiring organisations] have a very strict idea of the students they want joining them and age is one of those things.

That’s such a shame, as someone retraining is just as new to the industry...

Exactly. One of the speakers at the 2020 Lovelace Colloquium said that at the Colloquium a couple years before, when she went up to one of the career desks, they actually turned her away because she was too old for what they wanted and they didn't want to interact with her. It's not an uncommon thing.

I think if you spoke to a lot of these companies they'd say that they’re welcoming, but their bias is still towards younger students who are just coming up for the first time.

Did you feel like you had a touch of imposter syndrome when you started your course?

Oh, absolutely, without a doubt. I struggle a lot with imposter syndrome. I feel like it holds me back from so much and from putting myself forward for opportunities that would be a great fit. That first class, it was 100% impostor syndrome, because I felt like everyone was going to think I was a fake, that I wasn't welcome, that I shouldn't be part of the course…

I’ve since been given some really great advice, which was just say yes to things. If you have the time and the bandwidth for a fantastic opportunity, just go for it. What's the worst that could happen? And that's what I've had in the back of my mind ever since - otherwise, I'm not going to get anywhere.

I've also started to keep a record of any good feedback that I receive. So, whether that be in an email, on social media, or on my university assignments, I have them in a folder on my computer and when I'm feeling particularly out of my depth, I just look over them again and think ‘You know what? I've done these amazing things; look at this feedback that I'm getting from the people that I'm working with. I mustn't be as bad as I think I am!’

How inclusive have you found the industry to date?

It depends on how you define inclusivity because I found that in my classrooms, it's still a majority of white, cis-gendered men; I would say, easily, it's up to 70% - and that's just while studying. I'm not sure what it's like once you actually get into the industry.

I've been involved in events with BCS Women, so I have seen more inclusivity but also before joining the LGBTQ+ panel with BCS, I had not seen anyone that was openly like me and part of the community, which was quite nerve-wracking.

I think the industry really does need to look at making it more welcoming for people because the tech field is so vast. It covers so much; there's no reason why the people that are working in tech shouldn't be that diverse and wide ranging as well.

How have you found navigating the industry as someone who identifies as non-binary?

Being non-binary in the UK in general is already difficult. Non-binary is not a legally recognised gender and is often not acknowledged on a lot of forms, nor anywhere where you need to put down information. It's very hit and miss whether you can identify as non-binary on those forms or not. And then even further, the title ‘Mx’ (the gender-neutral version of Mr or Mrs) is not well known and hardly ever available on forms.

When it comes to the industry - and this is something that really worries me - is that you never know going into a situation whether your identity is going to be respected. You can ask for your pronouns to be used but depending on what situation you're in, you're taking the risk of constantly being misgendered, even accidentally, which can take a toll and add to existing work stress and damage your mental health over time.

Are there any quick wins for companies in terms of inclusivity?

Absolutely. The first small change that a company can make is to have a policy to recognise pronouns and their importance. This can involve something as simple as including pronouns in email signatures, or asking people for preferred pronouns and then doing your best to use them. The reason why this is important is that if it becomes normal for everyone to ask for and provide pronouns, it means that non-binary and trans folks won’t have to single themselves out - or possibly out themselves - by having that discussion about pronouns. If it's normal for everyone, then it's a small step, but it can make the workplace feel a little bit more welcoming.

I'm hoping to work quite closely with the rest of the BCS LGBTQ+ member panel to help with this. We're hoping to provide guidelines and documentation that will help companies and businesses to implement positive changes, to ensure that their workplaces are open and welcoming for all.

For disabilities, one thing is to recognise that working remotely is so vital to the future of work, especially for people that are disabled, chronically ill, or dealing with any sort of medical condition, because that flexibility allows people not only to return to work, but to balance work and their health. Offering part time hours helps, too - people can still have a worthwhile contribution to the company, even if they're not working full time.

What impact do you hope to have in the inclusivity space?

For my personal goals, I'm hoping to continue working on those underlying or hidden issues. So, things as simple as companies not following the WCGA guidelines (the accessibility guidelines for websites) and seeing how we can make them easier for companies to implement.

I want to look at how to make accessibility something that is at the forefront of people's minds. So, building systems to make it a core part of the business; making setting up accessibility processes as important as picking a company name and setting up a finance team. That is my main impact that I want to have going forward - whether that means creating software to do that, or continuing to campaign with BCS and working with other groups to find ways to push that forward.