Skip to content
Do you remember working on an electronic patient record system in Exeter in the 1970s? If so, our project leader, Jack Sparrow, invites you to join him for a 40th anniversary celebration of the Exeter Community Health Service Computer Project to be held in Exeter this June.

The project was an experimental project funded by the DHSS with ‘pay and rations’ delivered by the South-Western Regional Health Authority.

The project was an innovative and award-winning implementation of an online medical information system. It was in use long before the current micro-computer medical systems that now exist.

The initial investigations and design work started in the early 1970s and the full system was up and running by 1978 - when the BCS presented the project with an award.

40 years ago, if one had been a patient at Exeter’s Princess Elizabeth Orthopaedic Hospital or the Wonford hospital - or a patient at one of two Exeter-based GP surgeries - one would have been familiar with the sight of the consultant, GP, administrative staff or nurse using a VDU  and keyboard for inputting and retrieving patient information utilising one common database: the integrated patient record (IPR). 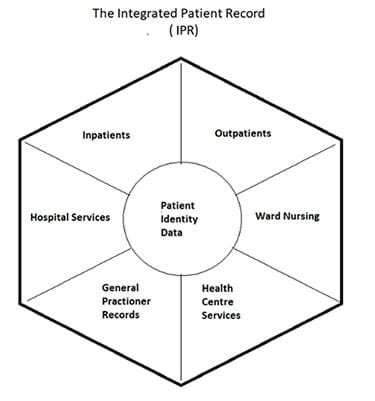 The design of the IPR was such that it could be built up over time. The core or hub of the system was the patient identity section, a record shared by all authorised users of the system. It could be accessed by indexes which were appropriate to the individual department, as you can see in the schematic diagram below. Strict rules were applied as to who could read the records and who could update them, all controlled through individual passwords.

The project used an ICL 1904 with over 100 VDUs, plus associated hard copy printers. There were development teams dedicated to each of the user departments, and a team of operators kept the system running 24 / 7. Perhaps you were on one of those teams?

The project achieved most of its design goals, but the nature of the hardware meant it was too expensive to replicate. However, many of the ideas and features can be seen in current online patient information systems.

IoT technologies and connectivity powering protection in the healthcare sector

Pressure on healthcare systems is ever mounting – increasingly so, since COVID-19, writes Paul Craig, Head of IoT, at OV. Outdated and slow technology only makes an already intense job more difficult.

From chance discussion over a coffee to a fully live and living post-graduate course, Professor Wendy Dearing celebrates a new addition to Wales’ health and care.

Hao Zhang is CEO of Oxford Cancer Biomarkers, who has been developing a machine learning system to provide clinical decision support for colorectal cancer treating clinicians. He talks to Brian Runciman MBCS about the programme, big data, AI ethics, privacy issues and more.

Touchless computing for everyone

Touchless technologies are going through a revival. Sheena Visram tells Johanna Hamilton AMBCS about this new era in inclusive and intuitive touchless computing.

How being PSD2 compliant can set you ahead of competitors