Why? Because BCS is set to publish the fourth part of a definitive four-part series of evidence-based reports exploring equality and diversity in the IT workforce. And this look at gender needs a context. There are many role models, and many women working in computing on a day to day basis largely unsung.

BCS first undertook research on the gender split in IT in 2013. We included in early versions, before we expanded the remit two years ago, the topline figures from 2003 onwards. These would make for the most boring graph imaginable, but a graph that nonetheless makes a point. 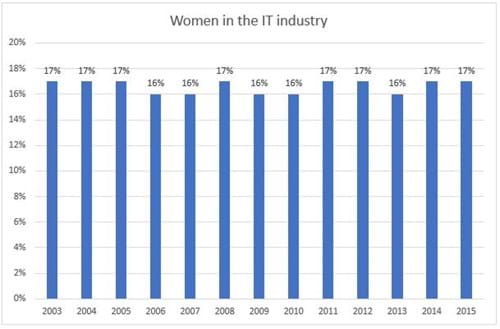 In the latest report, published in the BCS member area, you will see the 2016 figure - the latest we have. Can you guess what it is?

So, are we shouting into an echo chamber? Is this a point not worth making? Are the arguments for diversity not proven?

The first question is one of how we get our message out. But as for the other two questions, as an ethically-driven organisation, would answer emphatically ‘no’.

Enhanced objectivity, improved product design, different thinking approaches, innovation -these are some of the advantages that organisations have seen through encouraging diverse work forces. These are strong arguments for the benefits of diversity in the workforce, but these have been criticised by some as being subjectively qualitative rather than quantitive. Economic arguments have been more difficult to make, not least because of the complexity of large organisations and the effects of correlation rather than causation in decision-making.

But as recently as July 2018 research has showed the measurable benefits of diversity. Harvard Business Review took a business with plentiful records and a consistent approach - the venture capital industry - and found compelling arguments in favour of diverse teams. They report ‘the success rate of acquisitions and IPOs was 11.5% lower, on average, for investments by partners with shared school backgrounds than for those by partners from different schools. The effect of shared ethnicity was even stronger, reducing an investment’s comparative success rate by 26.4% to 32.2%.’

And, back in 2015, McKinsey research drew directs lines between organisations that have good racial, ethnic and gender diversity with financial returns above national industry medians.

But purely economic arguments are too simplistic, as Investment Europe noted in 2017. BCS, too, looks beyond the purely economic view. Hence, our 2018/19 diversity research and survey, covers gender, ethnicity, age and disability issues. The main report analyses existing data, mostly from the ONS, but we also surveyed our members to get a flavour for their experiences in our industry.

Some of the comments we received were highly instructive. One drew attention to the ‘issue de jour’, AI bias. Reports a member: ‘I have had serious problems with recruitment consultants who seem to view women as less experienced regardless of what the CV says. It is also clear that machine learning algorithms are biased (trained on mostly white male CVs?). I have experimented with this and found that my CV does not make it through machine learning filters used by current employers. However, once rewritten by a male friend it gets through. Clearly the subtle differences in phrasing and hobbies are enough to bias filters against anyone who is not like those previously hired.’

Members as a rule are welcoming of diversity: ‘In my experience an inclusive workplace is significantly more appealing,’ reports one.

Rebecca George OBE, in her introduction to the 2017 report wrote: ‘There are lots of examples where simple, organisational changes can be made to alter the status quo - but it will require a myriad of changes, sustained focus and collaboration across organisations, employers, government, schools and community groups if we’re to change anything. That’s why, with the publication of this report, BCS is calling for each and everyone of us to make a simple pledge to take one action to make that difference. Treating everyone with respect and improving diversity in our sector is surely a key element of making IT good for society.’ That stands for 2019 too.

A game changer could be the increase in awareness. In the research we asked about training in this area - 57% reported some general gender equality and diversity training and 30% have received unconscious bias training. The 36% who answered ‘none at all’ indicates that some organisations are doing better than others. Some comments indicated a serious level of commitment on the part of some. One commenter said they had received ‘awareness training as part of an overall ethics programme’ and another note that their general diversity training had a ‘specific transgender bias.’

More of the same will help move those intransigent numbers.

What will make a difference to these static numbers? The report contains a number of approaches - we would welcome your input on more and, if you’d like to send personal experiences, we’d like to see them - please email editor@bcs.org

Hitting all the right notes

Sports fan finds his dream job as a digital apprentice

How to get a brilliant career in tech