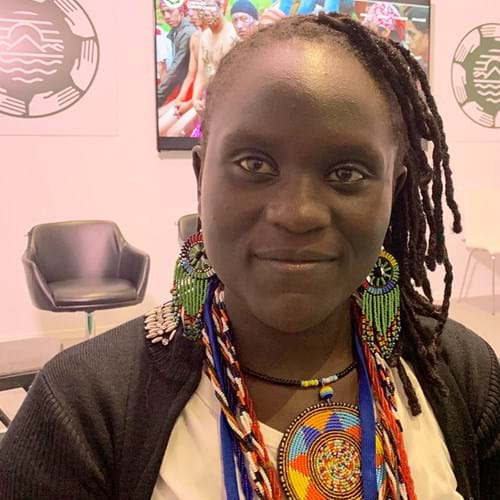 After two weeks of negotiations, COP26 issued its final declaration, keeping alive the ambition of curbing global temperature increases to 1.5°C. A BCS team went to the summit to find out about the tech stories, and Computing at School did a presentation on Barefoot Climate Champion resources. BCS Senior Media Officer Claire Penketh reports.

A major aim of the 2021 United Nations Climate Change conference was to ensure global warming does not go above 1.5°C by 2100, to limit the worst impacts of climate change. Countries agreed at Glasgow to meet next year to pledge further major carbon cuts, with the aim of reaching the 1.5°C goal. Funding was also promised to help countries adapt to climate change.

This summit also marked the first time that coal was directly referenced in a COP agreement. However, the biggest disappointment for the smaller nations most affected by climate change and environmental activists, was the last-minute intervention by China and India which led to a commitment to ‘phase down’, instead of ‘phase out’ coal.

COP President Alok Sharma said China and India will have to justify themselves ‘to some of the most vulnerable countries’ over their stand on coal.

I spoke to Salem Avan, Director, Strategy, Policy & Governance Division, Office of Information and Communications Technology at the United Nations before the COP26 declaration was announced. His job, he said, includes ‘taking care of all technology that isn’t operational for member states... such as their technology needs.’

He had faith that innovation and technology could help save the planet: ‘I have no doubt that it can, but I don’t think it will on its own. We have the technologies that we need, either in place or on the horizon, but in order to get them to scale so they become mainstream, we have to make an effort.

'Humanity has to understand that it has to make fundamental changes to get us to that level. I read every day that we can capture carbon, for instance, but what I’m not seeing is a unified, coherent approach and this has always been the problem.

‘The main issue is efficiency and alignment, not a lack of technological solutions, nor engagement or interest. We do multiple things that are disconnected from each other.’

He added that, ultimately, it needed the macro-level support of the nearly 200 governments that attended COP26 and of the private sector, so that technological innovation could fulfil its true potential to mitigate climate change.

‘What I have always been very aware of is that the member states almost always come to an agreement. The agreement may not be perfect, but if we can get to the point where member states can start to agree on a common approach and globally find those kinds of solutions that could really scale up and start supporting them, we’ve got a much better chance.

‘We need to come together and create an incubator of incubators that is government supported. You can implement technologies, but if you don’t have government advocacy, awareness and legislation, support and resources that align and support that technology, that innovation will land on unfertile ground.’

But for the chair of the BCS Green IT Specialist group, Alex Bardell, it’s also about individual responsibility: ‘Fossil fuels are only burnt because we consume power and drive our cars. If we only travelled when we had to using zero carbon and didn’t overheat our poorly insulated houses, then we would not need fossil fuels in first place.

‘At BCS, we are going to invest time and eff ort helping to define what low carbon compute actually looks like and how we can better exploit technology to reduce our reliance on fossil fuels.

‘We can produce education and thought leadership pieces that help companies mitigate their carbon usage, as we see this as an issue that has to be resolved by everyone changing their behaviour, rather than thinking that all governments can somehow solve this issue.

‘It must be clear that the world’s population is responsible and BCS has to be in a position to guide our industry in the correct direction.’

The point was put again and again by delegates from the poorer regions of the world that it is their countries that are at the greatest risk of being hit by the impact of climate change.

They are also the countries most affected by the global digital divide. Faith Ntando, an official COP26 observer and youth ambassador for the Maasai people in Kenya told me that it’s women who bear the brunt of climate change: ‘We lack food and water for our ourselves and our animals. Many women and young girls have to go up to four kilometres, to search for water, which puts them at danger of physical assault.’

Technology is way down on their list of priorities: ‘My community, especially indigenous women and girls, can’t access phones and tech gadgets - we can’t afford them and we’re still battling with the challenge of getting enough food.

‘Social media technology has taken over almost everything and is the main way of reaching out to people. Since our people can’t access this technology, some of our needs and challenges are not being reported. ‘

Faith said she would like to see better access to green technology, such as solar panels. ‘It would mean our people wouldn’t be cutting down trees for firewood, which is something that we still use in our homes. There also wouldn’t be the fumes that affect our women’s health.’

Her message to the leaders of the western worlds was simple: listen to what we have to say and give us a place at the table. ‘There’s a need for inclusion, for women, for youth in our countries, because we are worried that this is something that will still affect us in the future, as we are more vulnerable to climate change. If our people were represented here, I believe there’s so much that could be changed on the ground.’

The 10th day of the summit was on the themes of gender, science and technology. The member states discussed the expansion of international technology collaboration to implement Article 10 of the Paris Agreement.

Several nations, including Germany, Japan, the Republic of Korea, Spain and the United States, announced funding commitments to support the work of the UN Climate Technology Centre and Network (CTCN) - the implementation arm of the Technology Mechanism.

The meeting, hosted by the UK COP Presidency and the Chilean and Danish governments, focused on supporting developing countries to access technologies for both low-carbon and climate-resilient development.

Government representatives discussed the need to prepare the necessary policy and regulatory foundations to support widespread technology innovation and deployment in developing countries. Building the capacity of skilled workforces to install and maintain green technologies was also highlighted as a key priority.

John Booth, Vice Chair of the BCS Green IT specialist group was disappointed by the outcome of the summit and said what is needed is system reboot when it comes to tech: ‘With respect to the technology companies, actions speak louder than words and their words ring hollow at this moment in time.

‘When it comes to data centres, for all the rhetoric, continuing to build new facilities globally to 20th century designs, when we should be having a radical rethink, is just business as usual.

‘The tech and concepts to deliver truly energy efficiency and sustainable data centres is well developed and ready to go, it’s time for the operators and investors to re-educate their customers and start to build them.’

BCS were invited to take part in an event organised by OpenUK, who campaign for open source software, open source hardware and open data. OpenUK had their own venue, on the perimeter of COP26 itself inside an enormous inflatable igloo.

He said: ‘I was really excited to talk about what the teachers and primary school pupils have been doing with the Barefoot Climate Champions resources. Pupils make their own planet pledges about what they are going to do to tackle climate change and share them.’

He also filmed some of the high-level experts at the OpenUK event, asking them questions posed by the children at his school about what practical steps can be taken by all of us when it comes to reducing our tech carbon footprint.

The reality of COP26

There were two main sites at COP26 itself. There was the Green Zone at the Glasgow Science Centre which had over 100 exhibitors and 200 events where the public had the chance to listen, learn and celebrate climate action.

The main business of the summit took place in the Blue Zone at the Scottish Events Campus which played host to around 30,000 delegates, journalists, heads of state and their negotiating teams.

Within the security cordon of the madly busy Blue Zone, the great and the good gave their keynote speeches. Around the venue there was a bewildering array of fringe presentations - ranging from Nordic climate neutrality; decarbonisation pathways for Brazil through to Formula E: accelerating sustainable human progress through the power of electric racing.

The overall impression was that there were a lot of people, countries, and organisations all enthusiastically hoping that their ideas and innovations could hold the key to stopping climate change. According to the environmental pressure group, Global Witness, there were also more than 500 lobbyists linked to major oil and gas companies, a larger number than the delegation of any single nation.

At the close of the summit, the UN Secretary-General Antonio Guterres said the planet was ‘hanging by a thread.’

‘We are still knocking on the door of climate catastrophe... it is time to go into emergency mode - or our chance of reaching net zero will, itself, be zero.’