Skip to content
‘It is a truth universally acknowledged, that a single man in possession of a good computer, must be in want of an app.’ Jacqui Hogan CITP MBCS takes a playful but thought-provoking tour through Jane Austen’s life and work and asks how the writer might have woven today’s technology into her fiction.

I’ve been a fan of Jane Austen for over 25 years and have worked in a variety of IT roles for almost the entirety of my career. So, it was easy to say yes when the BCS Hampshire branch asked me to put together a talk involving both, to celebrate the 80th anniversary of the Jane Austen Society. After all, Jane Austen lived for most of her life in Hampshire.

In considering how this might be done, I decided to focus on three of her novels along with her life, to see how being a geek might have enabled her to include many of the technologies we now take for granted. Two hundred years ago, they wouldn’t even have had mobile phones with which to make assignations. Shocking! Just imagine how the stories might have been different if they did have tech...

Pride and Prejudice - or match making made easy (er)

As those who’ve read the book will know, this is the story of five sisters with a mother hell-bent on finding suitable matches for them. Imagine how much easier this would be if she could search for young gentlemen living locally on LinkedIn.

Surprisingly, when I looked, I found that Mr Darcy (the main hero) is already there. How convenient! Sadly, it did not include his annual income - an oversight I am sure LinkedIn will address in their next updates. I can envision Mrs Bennet poring over LinkedIn entries, eager to find a newcomer before her neighbouring mothers do.

Mr Darcy is a fine young man, who has a clear idea of the perfect woman. In his explanation of this to the heroine Elizabeth, he says (almost):

‘A woman must have a thorough knowledge of music, singing, drawing and all the modern languages... a certain something in her air and manner of walking... ‘All this she must possess,’ added Darcy, ‘and to all this she must yet add something more substantial, in the improvement of her mind by extensive coding.’

I imagine Elizabeth would have smiled at this. After all, Jane could hardly fail to give her favourite heroine the coding skills she herself would have admired, if she were a geek. When I asked the webinar attendees to vote on what IT related job they thought Elizabeth would do, they remembered her playful nature and suggested ‘games designer’.

Would Lady Catherine approve though?

Persuasion - or vanity and distance?

Sir Walter Elliot, father of the heroine of Persuasion , Anne Elliot, was a man of vanity and little sense. With access to the best of today’s technology, I suspect he would have enjoyed the cult of the selfie so much, that he would have dispensed with the many mirrors he had displayed in his Manor.

Instead, he could have rejoiced in being able to share his selfies with the world at large and enjoyed his daily (at least) task of Googling his name to remind himself of the many examples of his handsome appearance. Even today, there are a great many pictures to be enjoyed by Googling ‘Sir Walter Elliot’.

Much of the story revolves around the loss and subsequent meeting again of Anne and Captain Wentworth, who went to sea to seek his fortune only returning seven years later. At that time, they had no communications option, so I wondered how their story might have played out if they’d had access to WhatsApp? 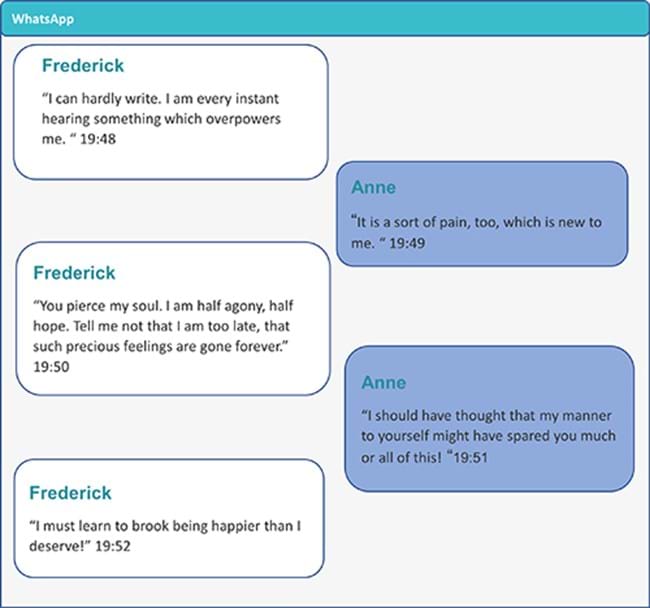 Emma - or trouble with AI

My first thought was that Emma, as a young woman with time on her hands, would likely be a YouTube star. With her matchmaking inclinations, what better way to publicise this than via a matchmaking YouTube channel? Then, I thought again about the core of the story.

She has a friend called Harriet, whom she attempts to match with several young gentlemen - failing miserably. Harriet is not very bright and goes along with whatever Emma suggests. Ah ha, I thought: Harriet must be an AI that has been programmed by Emma! I’m sure that a geek like Jane Austen wouldn’t be able to resist this twist. Harriet would become the:

While this might sound a little creepy, I think it would lend a certain geekiness to the story. Interestingly, the link between AI and Jane Austen has been explored by a new AI project called AI|Writer. According to an article by Thomas Macaulay:

‘When ‘Jane Austen’ was asked how her characters would use social media in the 21st century, the author replied:

‘I’d have Emma promote her self-published book on Facebook. I’d have Emma update her status with a lament about the deplorable state of the publishing industry in a desperate attempt to get her Facebook friends to buy her book.’

While I think this is an intriguing idea, I think Jane would have explored the difficulties of inherent bias, through trying out different algorithms. Each algorithm could be designed to help H.A.R.R.I.E.T. become attracted to different young men - each ending in disaster of course! What a great way to explain inherent bias in AI - through the medium of popular fiction.

Jane Austen - improved publishing and beyond

Turning to Jane’s own life and the impact technology could have had, I wondered what IT job she might have had if she’d been a geek. Turning to the attendees of the webinar, I asked for their opinion. Interestingly, they thought that Jane Austen would most likely be an internet entrepreneur!

On a more practical level, I have no doubt that one improvement Jane would certainly embrace would be to self-publish via Kindle Direct Publishing. Jane had a great deal of difficulty getting her books published initially and this would have saved her a lot of money and time. It might have freed her to complete her unfinished novels such as Sanditon or The Watsons, or to write more novels, e.g. ‘Geeks and Gentility’. It might even have given her sufficient funds to get better healthcare and live longer.

Because, if she had lived another 25 or so years, would she have had the opportunity to meet and collaborate with Ada Lovelace? If Jane Austen had been a geek, they might have enjoyed a pleasant afternoon tea together discussing Ada’s ideas for her algorithms.

Who knows? Perhaps if Jane Austen had been a geek, we might now be celebrating HER as the first computer programmer instead.

Could AI have an answer?

Finally, there’s another tantalising question: could AI finish Austen’s unfinished novel, Sanditon? She started work on the novel in early 1817 and completed 11 chapters before, it seems likely, poor health caused her to stop work.

Because Austen completed scene-setting for the book, Sanditon has become a favourite of ‘continuators’ - writers who complete new work based on old (and sometimes unfinished) texts.

It would be interesting to ask the designers of the AI project whether AI could finish Jane’s unfinished novels - or even write a new one. I think the answer would be yes, but whether we would be happy with the result is another question!

Inherent bias is difficult to predict. With a feminist bias, perhaps we would see the heroine, Charlotte Heywood save the Sanditon resort in some clever and funny Jane Austen twist.

Maybe she would persuade Tom and Sydney Parker to turn Sanditon into a new style virtual reality ‘playground-by-the-sea’? I suspect many of her current-day readers would rather like that!

The landscape for testing software has never been so broad. Applications today interact with other applications through APIs, they leverage legacy systems, and they quickly grow in complexity. Many applications are starting to integrate with AI-based components. What does that mean for testers?

Thanks to Facebook, the metaverse concept is a hot topic. Dr Ian Hughes, Chair BCS Animation and Games SG, takes us on a tour of tomorrow’s virtual worlds.

Is solution architecture compatible with agile?