What were punch cards and how did they change business? 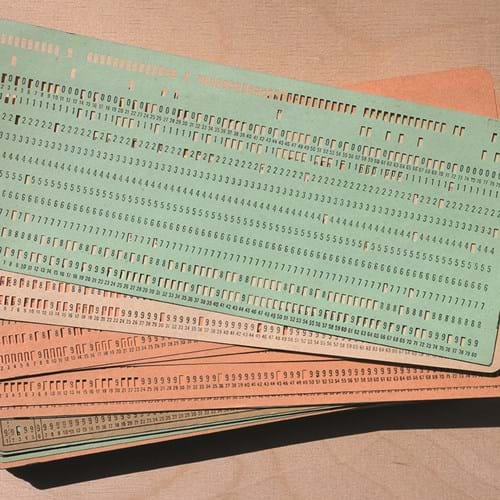 Wikipedia’s definition: ‘A punch card is a piece of stiff paper that holds digital data represented by the presence or absence of holes in predefined positions.’

This basic idea goes back as far as 1725, when a punch card was developed to control looms in a factory. Commercial data processing originates from the use of punched cards to process and analyse the USA census of 1890 and it was speedily recognised that they were an ideal instrument for statistical analysis. Their use commercially was hampered by a lack of alpha characters and, in 1921, Powers Samas produced the first commercial alpha format. This was followed by IBM in 1931 (upper case only).

Invention that moved with the times

During this period, a standard size evolved to 82.6mm by 187.3mm. The number of columns per card varied from 40 to 80 to 96 and others. Each column on a card represented one character - so, a 40-column card could hold 40 characters. A card reader could read the card by shining a light at the card and by picking up the spots of light to identify the character

The position of the holes in each column to represent, say, ‘9’ would vary with each company’s machinery processing the card. A standard was not reached until 1969 - but by then, punch card systems, commercially, were being replaced by computers and magnetic tape input.

World war two delayed the spread of commercial punch card systems and it was not until after the war that they started to evolve mainly in larger companies, government, universities and other organisations. Smaller companies started to install systems, driven by need, in an expanding economy. A typical example was the Standard Yeast Company, whose system was written up in the Powers Samas House magazine in 1952 and which had gone live in 1950 - of which more later.

Punch cards in a company could originate from three sources: basic input, produced automatically as the by-product of another operation, or pre-punched and held in a library. Normally, they would have had a different colour for each class of data. So, the cards to produce sales ledger statements might have a white card (customer name and address) followed by blue cards (invoice details) interspersed with red cards (cash) and yellow cards (credit notes). The white cards came from the library, blue cards, cash and credit cards from the input room. Input rooms were highly disciplined.

For example, in a company, orders would come in and would be vetted, coded and then batched; listed by quantity (to provide a check total) and given to the next team who were, at that time in history, predominantly women. They would, using a pre-set format on the punch, punch up the data and then hand the cards and the batch total to a verifier who loaded the cards in their machine and redid the work, thus ensuring accuracy.

Verifiers sat apart and never knew from which person the data came. Speed was variable depending on the job and was slower than the input speeds of magnetic tape encoder devices of the late 1960. There, the standard speed was 15000 characters per hour; punch cards would be considerably slower.

A post-war alternative to confetti

One by-product of the input room was chad, the coloured spots of card punched out by the machines. Confetti was expensive and hard to get hold of in the 1950s and chad was ideal.  However, confetti could be swept up, chad, if wet could not be swept up at all! After an appeal from the local church, chad as a substitute for confetti was banned.

In the 1950s, small companies started to install small systems, normally 40 column, which were then later upped to 80. A typical system was at the Standard Yeast Company.

In 1950, there was only two methods of communication: phone and post, which were economically viable for small companies. At that time, bread was made locally by small bakers; each town or suburb would have its own shop and these were supplied with yeast and what was known as baker’s sundries from the depots of the Standard Yeast Company (whose head office was in Chiswick, West London). Baker's sundries were such things as paper goods for cupcakes, jam, whisks, cake decorations, etc.

Some items had very limited shelf life, such as synthetic cream filling. At a time of rapid expansion, the control of stocks at the depots was vitally important and led to the installation of a Powers Samas 40 column punch card system. This comprised five automatic key punches, two hand punches and one verifier, one sorter and two tabulators. A tabulator was a machine which read one card at a time; it was programmed via a plug board and could select and print fields and accumulate totals (called ‘accumulators’ in the jargon of the time).

Equally, it could recognise card types and, at a stage when a specific card was read, would print the total of the previous items. For example, doing a ‘sales ledger statement print’, it would read the customer address card and print it continuing with invoices, cash, etc. But its instruction to print the total for that customer was the reading of the next customer’s name and address card. There is no comparison with today, as a tabulator was an intelligent printer and today’s printers are controlled by a separate processor.

The work included stock control (combining monthly analysis of sales and statement of gross profit on each stock line at each depot), commission statements, sales ledger and analysis of transport costs.

Earlier, in explaining sales ledger cards, I stated that first card would be a white card followed by blue; in the Standard Yeast Company’s system, the white card was followed by another card with the details of that customer’s purchases, cost value, selling price, selling value depot and traveller (salesperson).

The limitations of punch cards

For example, sales invoices were still produced via typewriters from the coded orders and the calculations necessary were done by comptometer operators - a comptometer was a machine which calculates by repeat addition. The calculations were written on the order form, which was then batched and sent to the input room. Updating of the sales ledger was done by taking the total sales ledger cards, plus the new input, and sorting them by client number and date.

With the addition of electronic calculating units in the 1960s, punch card systems became extremely powerful and flexible. Replacing them with disc computers would prove far more difficult than one would expect.

How did punch cards change business?

The Standard Yeast Company produced a centralised stock control system, enabling depot stocks to be controlled, production at the factory to be optimised, administration to be simplified and disputes on commission statements for travellers to be virtually eliminated.

The system was subsequently enlarged to be 80 column. To do this in 1950 was revolutionary and was a great credit to my father, who was the company secretary and accountant. I remember the day when it went live, I was 12, and there was a great celebration in the Grinyer household!

These systems had an important heritage for the next generation of equipment (disc computers) the discipline of any punch card system was absolute. To drop a tray of cards on its way to be printed by the tabulator could be the destruction of many hours of work. Discipline and organisation were vital.

The supervisors of these installations were in great demand as supervisors of the new computer systems. They were invaluable in their eye for detail and their ability to handle staff. Today, this type of system is a legend, yet it was the start of today’s systems and, as such, should be remembered with some respect - if only for the fact that all the Sterling calculations were done in pounds, shillings and pence offline.