Skip to content
Bob Crooks MBE and Chair of the BCS Green IT group takes a look at the challenges faced in managing the physical resource demands that lie behind the mass production of IT devices.

Global consumption of IT equipment is enormous; it drives a global manufacturing business, the value of which surpassed $4.5 trillion in 2017, according to the research consultancy IDC. This represents the construction of some 300 million computers and 1 billion cell phones worldwide.

According to the Global E-waste monitor for 2017, half the world's population of 7.4 billion now has internet access and a computer. Not only are first time technology users going online, but significant numbers of existing users are upgrading their devices as technology advances and functionality expands to provide new services such as AI or 5G.

Many of us own multiple IT devices. In 2016, almost every person in the United States owned a mobile phone and every second person also owned a tablet computer. Close to 25% also owned an e-book reader. Between 2012 and 2015, the number of American adults who owned a smartphone, a computer and a tablet doubled to 36% (Anderson 2015).

Vast use of virgin resources

This growth is generating unprecedented demand on our earth's resources. About 22% of mercury used each year around the globe is now used in the manufacture of electronic devices; this is only one of the toxic chemicals to be found in them.

The use of energy, resources and is water in the whole production process is intense. A UN Study claims that:

Consequently, at the other end of the life cycle, we are disposing of unwanted equipment at ever increasing rates. From the same study, the average US cell phone user replaces their model once every 18 months, despite the worldwide average cell phone life being around seven years. As a result, about 100 million cell phones are disposed of in the US each year; the majority of which are perfectly serviceable.

In the back-office, the number of servers required to support our digital world is massive - one estimate by daze-info.com is of 75 - 80 million servers operating worldwide. Of these, Google alone deploys some 1.5 million, Microsoft 1 million and Amazon may have nearly 2 million spread over some 30 data centres.

A typical lifetime for a server is three years, so the potential volume of servers disposed of is huge. In telephony, we all want faster access on demand to data, friends, photos and videos. So, many of us will be transitioning to 5G and we could see millions of 4G phones simply being thrown away.

In their 2017 global e-waste monitor report, it's estimated that nearly 45 million tonnes of all electronic equipment was wasted globally in 2016 and provided some interesting comparators for this volume: That’s the equivalent of 125,000 jumbo jets; six months’ worth of traffic at Heathrow Airport or the weight of 4,500 Eiffel towers.

Just what is e-waste?

To be clear, the main definition of e-waste covers not just ICT kit but all items with circuitry or electrical components and a power or battery supply. A full definition has been given by the Partnership on Measuring ICT for Development (Baldé et al., 2015a) and defines six waste categories:

The overall estimate can be broken down as follows: 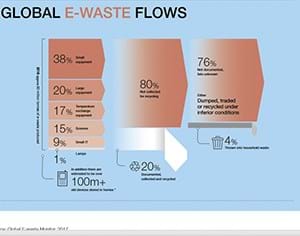 So, roughly half of the e-waste generated annually is associated with IT and telephony equipment. Where does it all go? The same report estimated the following destinations for 2016:

So, there is no data for 76%, or 33 million, of our 45 million tonnes of global e-waste. And e-waste is valuable as it contains elements covering half of the periodic table.

There is also a geo-political dimension with much of the e-waste from the developed world going to Central Africa, the Far East, Central and South America for disposal.

The challenge of efficient recycling

Finally, the whole process of recycling is complex, with operators facing physical challenges, including physically separating materials and ensuring data is wiped to meet security and privacy expectations. A typical process includes:

So where are we heading? According to estimates from the PACE report, if we do nothing, in 2050 e-waste will top 120 million tonnes - more than double the estimate for 2021 of 52 tonnes.

The many positives of recycling

There are positive developments to realise the value of recycling, including:

It is important to realise that these approaches would not only save on the need for mining virgin resources, but would generate employment.

So, we must all try to break the habitual throw-away and replace cycle encouraged by today's industry models, and seek to extend the life of equipment we already own. We must also ensure that when we no longer have use for it, we seek re-use and recycling avenues, fostering industries in the circular economy and saving the earth's resources in the process.