Thank you all for attending the other night.

Here are some links to the Museum and its exhibits for you to follow, should you wish, and answers to some of the questions we didn't get to answer in real-time the other night.

And, because it was such a significant system technically, here are a couple of highly evocative contemporary films on SAGE, the "Semi-Automatic Ground Environment" system, from the height of the Cold War:

Questions/comments from the event:

Q: I believe the SAGE control panel has featured in a huge number of feature films. So many flashing lights!
DS >>> Yes! You are absolutely correct. SAGE appears in multiple, usually B-rated, sci-fi and related films across the decades, wherever a giant scary computer is required. CHM obtained its SAGE objects from the last running SAGE installation in North Bay, Ontario, Canada, in 1982. View a list of vintage computers used in Hollywood across the decades

Q: What was the last-known company/organization actively using the old-style mainframes with reel-to-reel tape storage?
DS >>> A few things to note here: a) the answer is likely that government or industrial users would be the most likely candidates to have such systems still running. These are systems for which the cost of migration (economic, personnel, technical) is much greater than that of switching over; one attendee to the talk noted that Sandia National Laboratory still uses magnetic tape storage for accessing old data sets; b) many systems run under emulation, with modern storage devices, obviating the need for old style tape drives. Sometimes multiple levels of emulation, to keep legacy code (such as the 600 billion lines of still extant COBOL code) running are involved. In the IBM mainframe space, we can point today to the Hercules project, which allows for large-scale IBM mainframe software (System/370, System/390, System-z) to run on PCs; and finally, c) if you'd like to see a medium-scale IBM system with magnetic tape drives still running, you must visit the IBM 1401 Demo Lab at the Computer History Museum! Here was have two full IBM 1401 systems (1401 CPU, 1402 card reader/punch, 1403 printer and half a dozen IBM 729-style magnetic tape drives), demonstrated to the public every week. See the mini-movie on the project and demo

Q: Can you say something about your archives, and what's in the stores?
The CHM archives contain nearly two linear miles of documentation. We have a new building, the Shustek Research Center and Archives, where most of the physical document holdings are kept. It's a modern facility, with labs for software preservation on vintage platforms; research rooms for visiting scholars, an air conditioned media library for vintage magnetic media, and easy, convenient access in the San Francisco Bay Area. Many of the holdings are digitized, with more on the way. Please also see our bitsavers.org archive, the creation of CHM curator Al Kossow, which has some five million scanned pages of historical computer documentation.

The Museum Stores are in a third, climate-controlled, high-security warehouse in the Bay Area. We do give occasional behind the scenes tours but this is where we keep the 95% or so of objects not on display at any one time. We also loan objects to peer institutions and have an active research program that regularly interrogates these somewhat 'offline' objects. Additionally, a wonderful team of long-term volunteers does cataloguing at this warehouse, as new items come in.

Q: is there a way we can read more about the database proposals you discussed, or sign up for news updates
DS >>> Please simply send me an email and I will make sure you get regular updates. Thanks for your interest! We're very excited about the project!

Q: Dag, do you consider that you have any big "gaps" in your collections? Are you on the lookout for anything in particular?
DS >>> With a nearly five decade collecting history and an aggressive effort to collect seminal objects in the history of computing, there actually are not a lot of objects left for us to collect, in the sense that we already have enough objects to 'tell the story' already. Having said that, the collection is US-centric, of necessity naturally, and so we are eager to include non-American computer objects, documents, and so on. Please let us know if you hear of an object you feel should be preserved. Legendary German computer pioneer left instructions in his will that a Zuse Z23 computer be donated to CHM so that, essentially, visitors could see that not everything emanated from the US. So we 'get it' - please help us redress the balance, if you can!

Q: Do you have a minimum age for acquisitions? How might something recent become 'historically interesting' enough for it to be part of the collection?
DS >>> I spoke the other night briefly about the "ten year rule." It's the Museum heuristic for assessing the historical import and significance of a potentially donated object. History takes time. As was pointed out at a conference on the 200th anniversary of the French Revolution, when asked to assess its impact, someone famously said, We don't know. It's not over yet." You get my point. We make exceptions for truly exceptional objects. I noted the iPhone in my talk as one example. It was clear from the day of introduction that it was going to be important. We didn't know quite *how* important, but we knew it was the start of something big - indeed, it became an entirely new computing platform.

Q: Is the Xerox Alto in your exhibition the one which was restored some time ago and which is in operational status?
DS >>>The Alto on display is complete but its working condition is unknown. We do maintain a running Alto and most recently conducted a series of public lectures on its software with original inventors such as Charles Simonyi showing "Bravo," which ultimately became Microsoft Word); Larry Tesler showing "Gypsy"; and Dan Ingalls on the Smalltalk programming language.

Q: Dag, what do consider to be your "no.1 object" in the Computer Museum and what is the item would you most like to add to the collection?
DS >>> Very difficult to say though I usually think in terms of impact on human culture as my metric. Within that rubric, I choose ENIGMA. But other favorites include the 1976 Cray-1 supercomputer, the 1956 IBM RAMAC hard drive, and the 17th century set of Napier's bones.

In terms of things we'd like to have in the collection, we'd love more European and British computing objects. For example, we do have some objects from LEO III bought at auction which I neglected to note during the tour and those are highly prized. We'd love more LEO items, as we really consider it the earliest commercial, electronic, digital, stored program computer. An IBM System/370 would also be desirable.

Q: Do you have the lunar landing program for the DEC GT40 in the museum?
DS >>> We are obtaining it in the next year but for you now you can retrieve the Lunar Lander source code, as well as lots of great history, from CHM supporter Eric Smith's excellent GT40 webpage.

This event is brought to you by: BCS South Wales branch 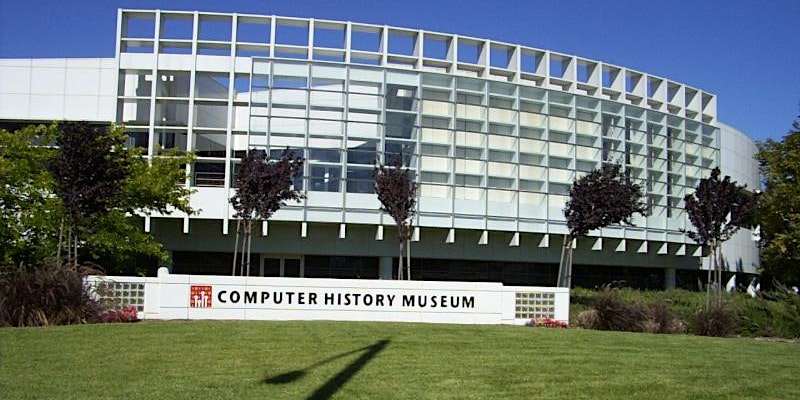