In early June, people shopping in central Cardiff were subjected to an unusual sight: a set of women in scientific white coats, standing on soapboxes, talking about their work in science. Soapbox Science is a project that puts working scientists in touch with the general public and lets the public ask whatever questions they have.

I was one of the scientists, and it was almost exactly as scary as I thought it would be. I’m used to talking to BCS and BCSWomen events, and to students, and to fellow researchers, and to schoolkids... but to the general public? Whilst they’re out shopping? This was the ultimate mixed audience.

I spoke about my life in science, including BCSWomen, and about my work in computer vision trying to build systems that can interpret pictures and videos. I had questions from 5 year olds and from retired people, and one very odd heckle from someone who thought I was a bloke.

I wasn’t the first BCSWoman to do this – back in 2011, Dr Sue Black spoke at the first Soapbox Science event in London. 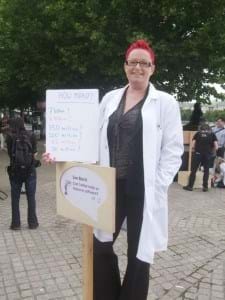 She spoke about software engineering and social media. She says “It was scary having to get people’s attention to get then to listen to what I was saying”, and I have to agree with her there. But we would both definitely recommend it: it gets you out of your comfort zone and forces you to interact with the general public in a way that we rarely get to do. You also get to meet some great women scientists from all disciplines.

Soapbox Science has been running for a few years now and has grown. It now takes place across the UK (with an event in Australia this year for the first time). So if you find yourself in a public space and happen across a bunch of women in white coats talking about interesting work, pause for a bit and listen, and ask them some questions.

To find out more check out the Soapbox Science website, here:http://soapboxscience.org or look at their upcoming events list to
see if there’s one near you.