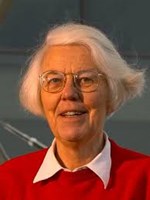 A pioneer of information retrieval, the computer science sub-discipline that also underpins the technology of modern Web search engines, Karen Spärck Jones was a British professor of Computers and Information at the University of Cambridge in Cambridge.

Her contributions to the fields of Natural Language Processing (NLP) and Information Retrieval (IR), especially with regard to experimentation, have been outstanding, highly influential and lasting, and include the introduction of InverseDocument Frequency for relevance ranking. Her achievements resulted in her receiving a number of prestigious accolades such as the BCS Lovelace medal for her advancement in Information Systems, and the ACM Salton Award for her significant, sustained and continuing contributions to research in information retrieval. Karen was also an outspoken advocate for women in computing, and we encourage former advisors of talented scientists to provide the judges with a rich and diverse candidate pool to select from.

To learn more about Karen and her work, see:

Karen Spärck Jones, was honoured by City University on 14 November 1997 at the graduation ceremony. She was awarded the honorary degree of Doctor of Science by the Vice Chancellor, Raoul Franklin. The text of the citation by Dr. Stephen Robertson, who worked closely for Karen for many years, was published in Informer.

In order to honour Karen's achievements, In 2008 the BCS Information Retrieval Specialist Group (BCS IRSG) in conjunction with the BCS established an annual award to encourage and promote talented researchers who have endeavoured to advance our understanding of Natural Language Processing or Information Retrieval with significant experimental contributions.

The Karen Spärck Jones Award is sponsored by Microsoft Research Cambridge; we would like to thank our generous sponsors.

Nominations are now open for the 2021 Award

View the list of winners of the award from 2009

Note that there is a Karen Spärck Jones Lecture sponsored by BCS which honours the contribution that women have made to computing.