Representation of older workers amongst the IT professions varies substantially and during 2020, whilst only around one in ten web developers / designers (10%) were aged 50+ (five-year average to 2020), more than one third of those working as IT directors (35%) were from this age bracket.

Representation by IT occupation (2020) 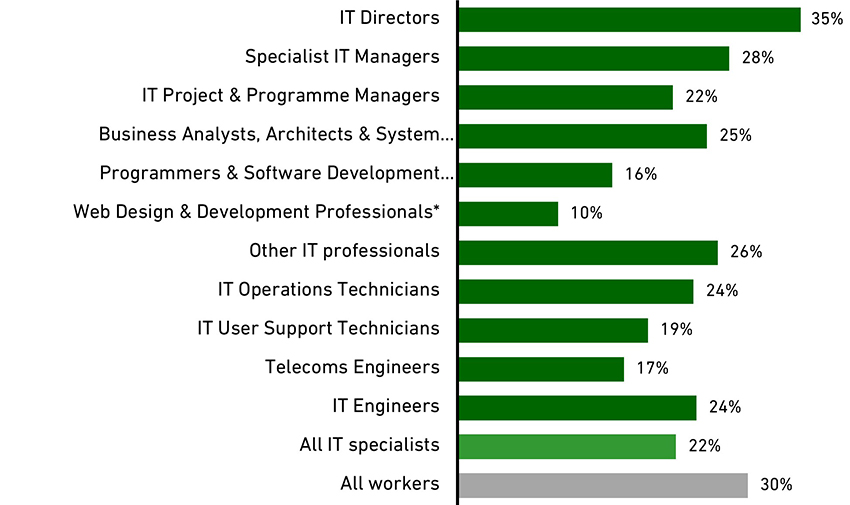 At 2%, the proportion of IT specialists aged 50 and above who were working on a non-permanent basis during 2020 was below that of younger IT specialists (3%) and individuals as a whole aged 50+ (4%).

By comparison, the incidence of non-permanent employment amongst all workers during 2020 was still higher, at 5%.

Though a detailed analysis of the reasons why IT specialists (older / otherwise) were in non-permanent employment during 2020 is not possible (due to limitations of the data source), it can be said that older IT specialists appear more likely to be in temporary positions as they do not want a permanent job, with 34% of those aged 50 or above stating this to be the case during the 2016-20 period, compared with 20% of those aged 16-49. This was also the case for workers of this age as a whole (with comparison figures of 33% and 23% respectively).

At 3.4% the associated unemployment rate[1] for IT specialists aged 50 and above was notably higher than that for younger age groups (2.2%) and equal to the overall unemployment rate in the UK.