Older IT specialists are notably less qualified than others working in IT positions and in 2020, whilst 66% of those aged 50+ working in IT jobs were thought to hold some form of HE qualification, the figure for those under 50 was six percentage points higher (72%).

Within the wider workforce too, younger workers were found more likely to hold some form of HE qualification (and in this case, the difference was still greater at ten percentage points, with comparison figures of 42% and 52% respectively for those holding HE qualifications).

IT specialists aged 50+ are also much less likely to hold a degree in an IT related discipline than those of a younger age working in such occupations. In in 2020, just 8% were thought to have either a higher or undergraduate computing degree, compared with 14% of those aged 16-49.

Despite the arguably high skill / knowledge requirements associated with their work, IT specialists as a whole in the UK appear no more likely than other workers to receive job-related education / training and, throughout 2020, on average 24% of IT specialists stated that they had received some form of job-related education / training in the previous 13 weeks, as was the case for workers more widely.

The incidence of job-related education/training was marginally lower amongst older workers - 22% of whom received education/training during the previous 13 weeks, compared with 25% of ‘younger’ workers as a whole; again, this was also the case for older / younger workers in IT positions (comparison figures equal to the whole workforce).

As with other UK employees, the most common identifiable means of IT specialists[4] securing a job (where stated) during the 2016-20 period was by ‘replying to an advertisement’ (29% of those that had been with their employer for less than 1 year stating they had secured work in this manner), and this was true for both older and younger IT specialists (29% in each case).

The next most common means of older IT specialists securing a job was via contacts already working with the employer (22%) and the proportion of this age group securing work in this manner was much higher than that amongst 15–49-year-olds (16%).

Conversely, the proportion of older IT specialists gaining work via direct application was notably lower than that recorded by younger workers in IT positions (i.e., 8% vs 17%) and though this was also true for older workers more generally, the difference in behaviour was less pronounced (i.e., 15% of older workers finding work in this way compared with 20% of those from younger age groups during the 2016-20 period). 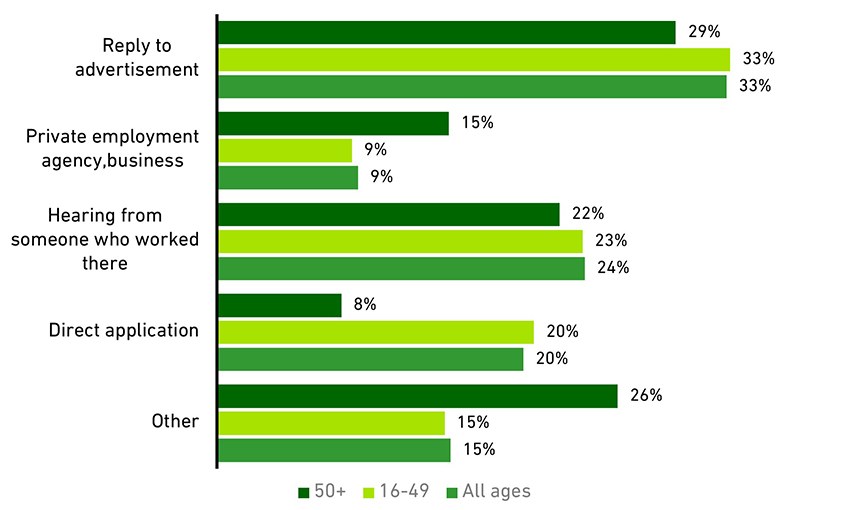